I piddled around for a long time yesterday and finally decided that I could at least do some backgrounds that I would collage over. This proves to be a great way to get started.

These started with old book pages, a 1931 newspaper page from the Oroville, Colorado Mercury-Register and hawthorns.

This morning I added some very thin old book cloth to the second one. I learned the hard way why I was advised not to soak the glue off the cloth. When it dried I found that the faint design that I loved on the cover was gone.

The reason I scrubbed most of the glue off the back was so I could incorporate a suggestion from a member of our collage study group – a piece of sparkling silver wrapping paper beneath the black cloth that would show through.

This one might be done after I glue this down.

The other one still needs something…even though I like the subtlety of the colors I want to consider adding contrasting pieces. I’m going to put it aside for a little while.

I got my hair cut yesterday and boy, did that make me feel better. And having this new phone camera that takes decent photos – golden.

Here are some shots of my “new” studio room.

Now I have to see if I can force myself to go over to the UNCG gardens and clean up my plots before I get my massage and grocery shop this afternoon.

January was a busy month and February will be too, so you’re unlikely to see a lot from me. As far as this blog goes, I am, perhaps unduly, concerned about hosting my photos on Flickr. For one thing, they doubled their price since selling it, and for the other, their automation sends me erroneous billing messages which annoys me. I’m a curmudgeon, it’s true, but I am thoroughly sick and tired of software taking the place of human contact. I should become a hermit, I guess. Anyway, it has led me to spend some time transferring some of my most important photos to WordPress. It wouldn’t be a problem but I have to go into EACH POST and change the link to Flickr! OY.

The Italy trip is done now and in 2020 I will concentrate on one big travel series at a time, then the posts in between. Then I will set up some gallery pages for my art. When January 2021 rolls around again I will consider dropping my Flickr Pro account if I have finished up the link changes, but considering that I have been hosting my photos and linking to them on Flickr here since 2006, I wouldn’t be surprised if it takes me two years to accomplish this without wrecking my blog. I feel like I am being held hostage to Flickr.

I finally ordered a refurbished laptop from Dell.com only to find that it came with Windows 10 in Spanish only and could not be changed to English. So I returned that after a lot of phone time and confusing emails and ordered a Lenovo off eBay. I won’t be doing business with Dell again. I just received it, it seems to work fine, and it will be easier for me to post once I finish setting it up. I also have the Tapestry Weavers South website to update, and that will move to the front burner now that I have a laptop at home.

My other tech update will be when I either have my phone repaired or buy a new one. Then I will get back to taking a lot of photos, which will make me quite happy!

We moved my studio space to the room that I suppose should be the dining room and the (parlor/TV room/family room/den/living room ???? what to call this room?) TV, sofa, etc. to the front room where it is dark and cozy. The studio room has much better light. This meant that I purged a lot more stuff in January – looms, yarns, books, knick-knacks – about twelve boxes worth! In return we have some actual space in both rooms, and the cats are delighted with the new racetrack from the front room to the back, complete with throw rugs to slide across on the studio and the kitchen hardwood floors.

I completed the caterpillar four selvedge tapestry, but the top and bottom selvedges bother me and the choice of those little areas of kelly green appall me. What was I thinking? It is still a good piece so I am going to hem it heavily at top and bottom and take care of both of those things.

Oh, and I paid off my last installment on this art retreat on the west coast of Ireland. Ireland, my love. And an increasing interest in collage and book arts.

So here are the two tasks before me today and through the end of 2019.

I am going to complete “Blackbird” and “Caterpillar.”

I am going to clean up the other side of the front room, which is currently piled up with junk. This is what I have been referring to as purgatory, where stuff goes to wait until it is burned or recycled. This is a big project but I am reaaaaaally done with walking in the front door every day to face this. By the end of the year, these piles and boxes shall be gone.

Plus I have a warm studio, and can even cook on top of this, but the trick is to keep it so that the heat doesn’t run me out of the studio. So no stovetop cooking today.

It is technically still morning. I couldn’t decide what I wanted to do this morning. The cool breeze on the front porch is delightful and it is so nice to share that space with my cats. Pablocito has taken to sleeping on the swing since Diego has won the battle of territory over the cat tower. I set up a table with a cushion next to the cat tower and Diego has claimed that too. It is odd that Pablocito rules the cat food bowls but Diego is Top Cat in all other things. Anyway, I’ve been re-reading Zen and the Art of Motorcycle Maintenance and I made another pot of coffee. 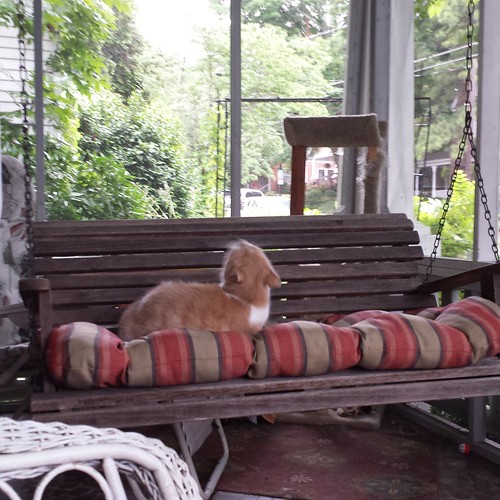 I managed to make even more room in the studio this week, and several of my plastic containers are heading to Reconsidered Goods or Goodwill, thanks to a gift from ZhaK of several cigar boxes and tins and candy boxes and a basket. I tackled the dreaded top drawer of my mother’s dresser which I have been filling with whatnot on top of her stuff, and as most objects of dread are, it was not nearly as bad as I thought it would be. After four years I think I am coming to some peace about my mother’s passing.

Fringeless, the online class by Rebecca Mezoff and Sarah Swett, begins on July 9. I took apart my copper pipe loom with the idea that I’d use the pipes for dyeing, and then realized that I would need it for this class. This is the pipe loom that I had the problem of it torqueing under tension. I glued the joints back together with super glue, except for the connection with the feet, which I want to be able to remove or adjust, and I hope this will help the torqueing problem, otherwise I will be be looking for someone who will solder it for me. 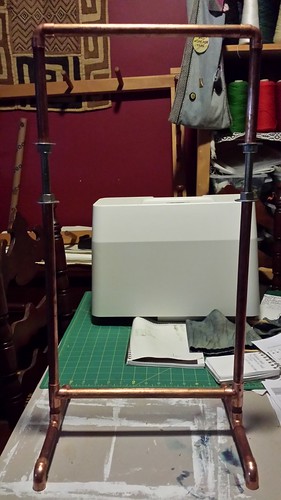 My mind is calming down. I’ve been able to sleep better. Thinking about aging in place more as I’ve realized how difficult it would be to emigrate somewhere that is not hot and humid. We still plan to visit Portugal and Spain next year. I will try to talk Sandy into limiting it to Portugal. I’ve learned that the temptation to do more often leads to me feeling frustrated and exhausted. Sandy has always “had eyes bigger than his stomach” in most things, and while it is easy for him to convince me to go wider (who doesn’t want more of a good thing?), I am more of the opinion that it is better to go deeper.

The silver maple tree was supposed to be in the process of coming down today, but we had a miscommunication with the arborist, so it has been rescheduled to August 2. That was probably a good thing since a big storm came through yesterday and blew a lot of my tomato cages over. I will need to go out and stake them today. The high is only supposed to get up to 77 degrees today! So nice after days of 90 plus and humid, and we get to give our AC and fan motors a break.

I can’t decide what to do next in the studio. My hands are hurting from too much mouse use at work and game playing and book holding so I think that I might get the sewing machine out, see if it forgives me after the accordion book project. If not, maybe it’s time to open up my mother’s Singer cabinet. I will head down to Lake Waccamaw for a spell later and that will be a great place to hand stitch and dye, if I am good to my hands now.

Okay, that’s enough. The church bells are playing hymns (ARGHHHHHHHHHH) and so I know that it is noon. I also know that the name of the song is “The Church’s One Foundation” and I see and hear the inside of Bear Swamp Baptist Church, my mother and father next to me in the pew. This might seem comforting to others. I hope that one day it might be that way for me, because I do not foresee us moving from here nor do I foresee the church stopping its twice daily hymn playing.

But the day is beautiful, the flowers in the hugelkultur bed are beginning to bloom, and the garden is calling. This is a good place. I am lucky to live here. 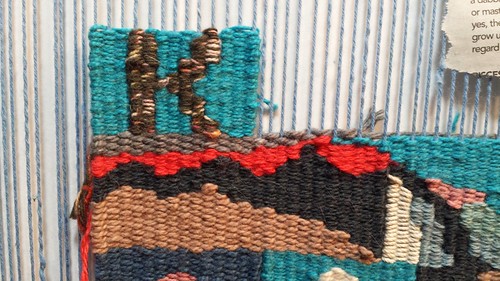 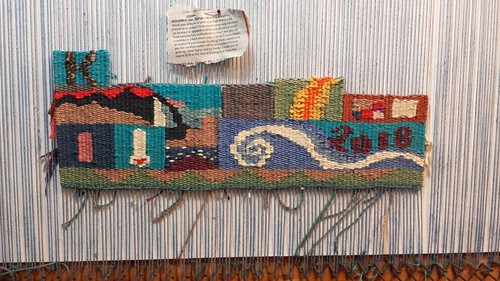 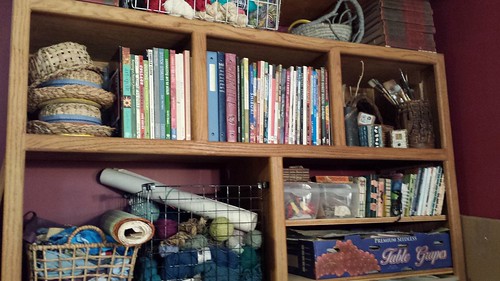 A little progress. At least all the plastic bags are gone and the coned yarn is with the other cones. Will bring back a couple more boxes of fabric stash today from the other studio. That’s the main thing I have hoarded, and to think that I’ve already given so much away boggles my mind. I might wind some warp for the double weave rag rug project I began 3-4 years ago and abandoned. I’d like to get something going on the Macomber loom this year.

Very cold again today. Snow predicted tomorrow night. Hopefully light – we have stuff to do at work that can’t be rescheduled. I walk to work so it’s no big deal for me, but the schools around here shut down on just a prediction of snow and it affects other people’s ability to show up. Our office often has school-aged kids hanging out! They are very well-behaved, much more than I would have been at that age.