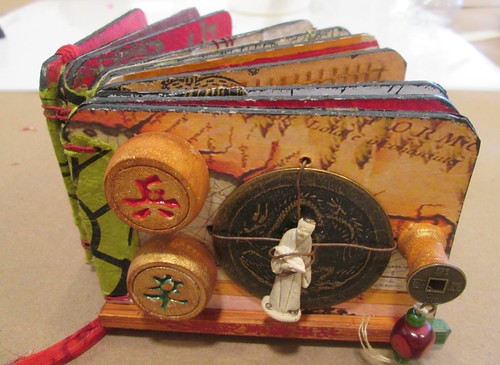 As with the other class, I was so completely engrossed in Sharon Payne Bolton’s Far East class that I didn’t get many process photos. However, I took a lot of photos of her books and my classmates’ books for inspiration and they are on my Flickr page. The photo above is of the front cover of my book. Here are a couple of shots of the spreads in it: 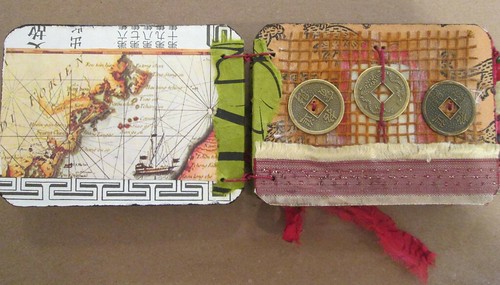 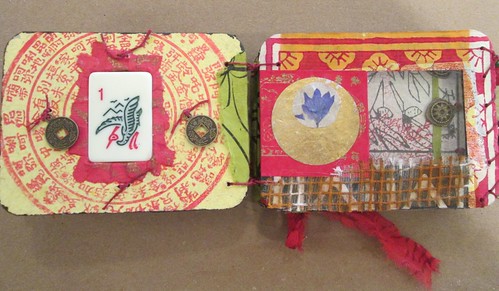 I felt like I have so much more to learn from Sharon – she was an amazing teacher with boatloads of patience and imagination. I hope that I’ll be able to take another class from her. Art-is-You Petaluma is moving to the spring next year and spring retreats are nearly impossible for me to attend. 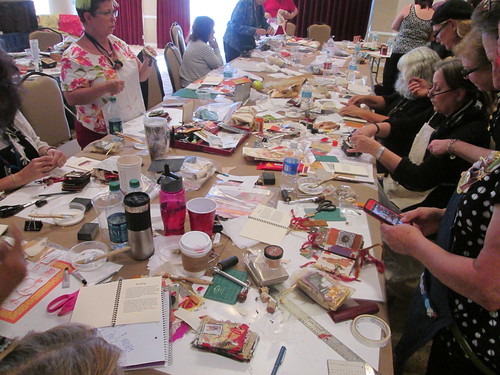 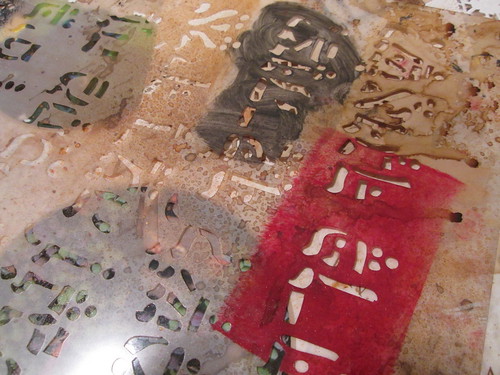 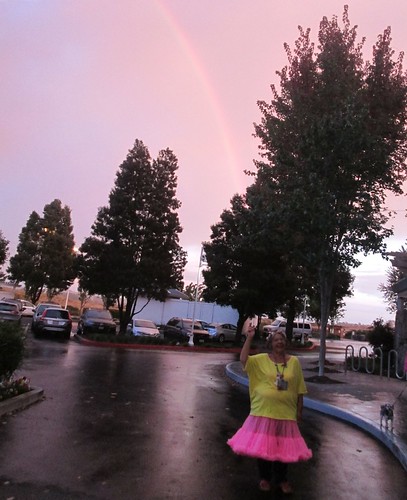 This rainbow ended in this lovely lady’s tutu.

I said goodbye to Anne, my roommate who ran a terrific store at the event, boarded a bus for San Francisco, and took the red-eye back to Greensboro.

And as you can see from the dates of these posts, I’ve been too busy since to blog about it until now. I’m starting to feel a little less frenzied now and I’ve got more to write about. Later. 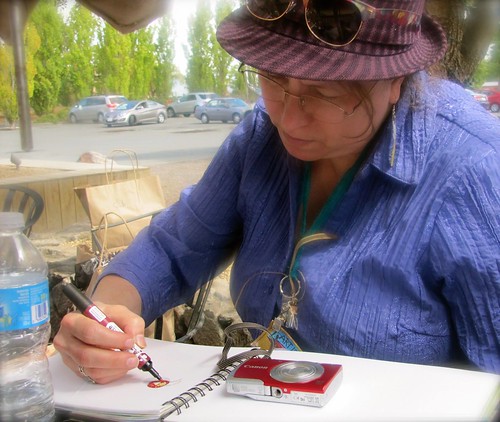 Roxanne took this photo of me on the second day of our class, when we went on a field trip to Cornerstone Gardens in Sonoma, California. The task before us was to sketch and take photos of the many unusual sculpture gardens on site, and I went a little crazy on the photos. In this photo, an olive fell out of the tree above me on my sketchbook so I decided that it was asking to be included. I used my watercolor pens and it came out pretty good in the end. 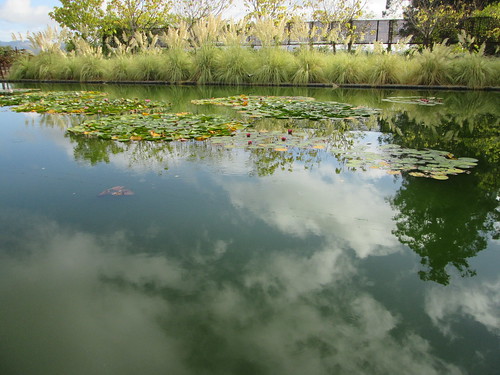 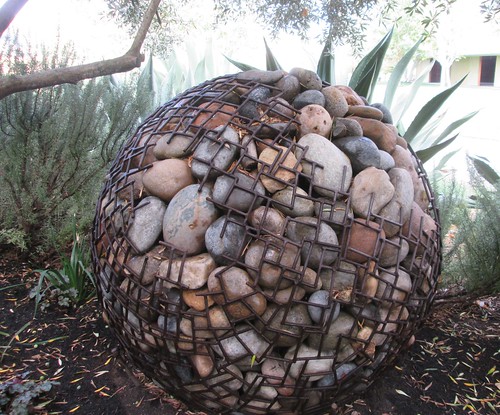 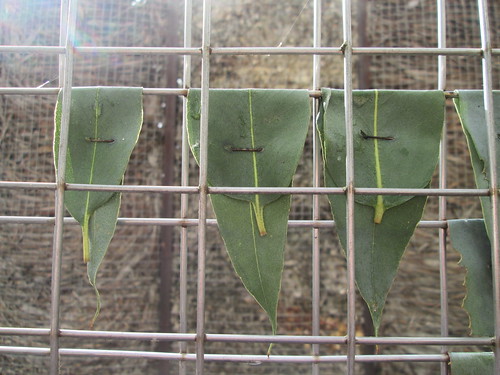 In the eucalyptus garden 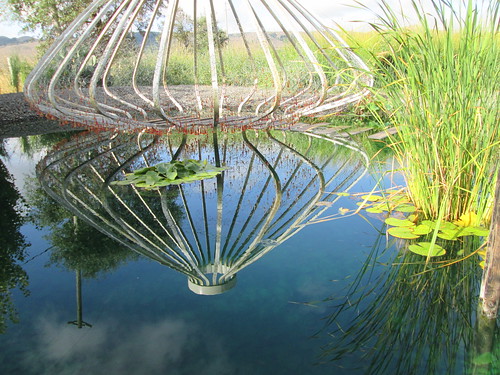 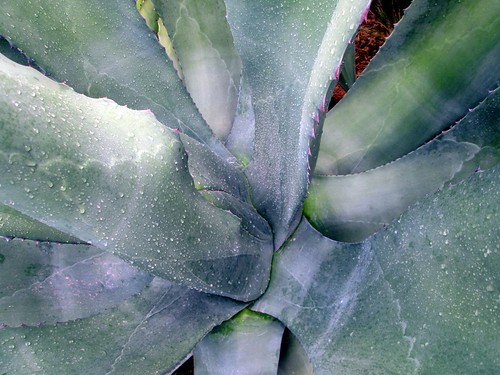 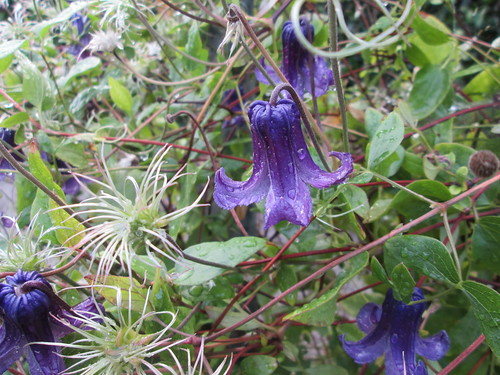 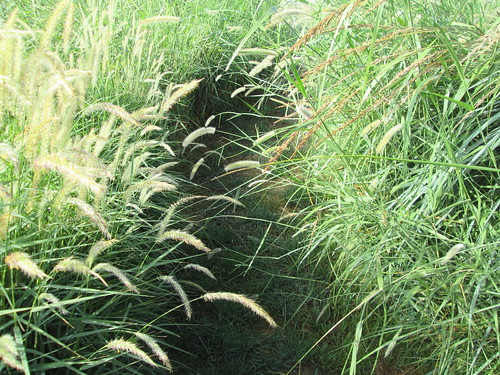 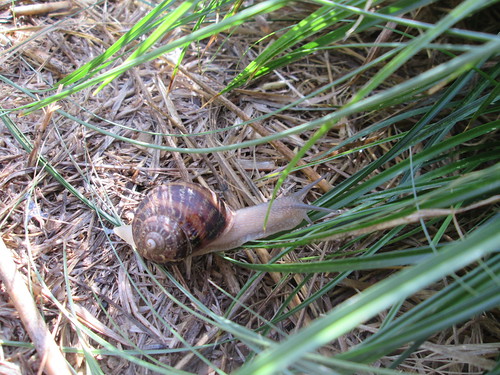 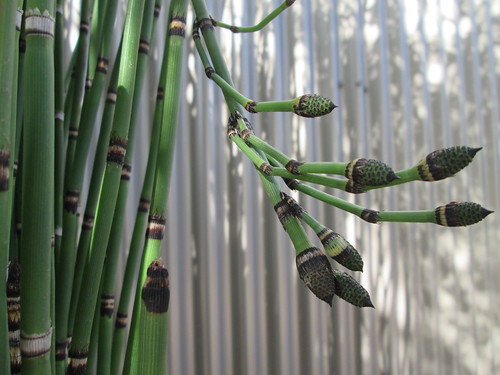 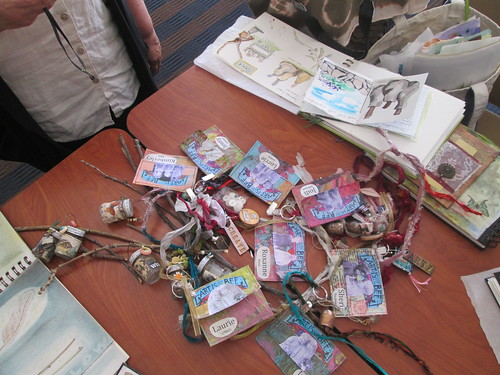 Tuesday, September 23 was a traveling day for Sandy and me, but we took off in different directions. He went home to Greensboro, NC, while I headed further west to Art-is-You Petaluma, a retreat that I also attended in 2012 and enjoyed so very, very much. On the way there I flew over Utah, which was probably the weirdest landscape I’ve ever seen from the air. I couldn’t stop taking photos. I’ve already posted one but here’s another: 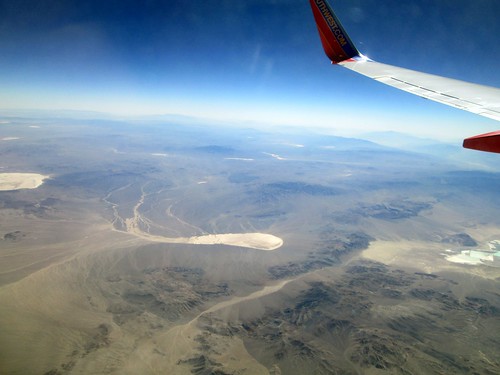 I ate fish tacos at the Sheraton bar and wiped out that night. Dramamine on the bus ride dropped me like a rock. It was Albie Smith’s last retreat for teaching and that made it very hard for me to choose my classes. In the end, I went with two other instructors whose classes I’ve been daydreaming about, because they would be new for me. Hopefully I will get back in contact with Albie when I move to Oregon. Another great reason to head to the PNW!

Mixed Media Natural Journaling with Roxanne Stout was my first 2-day class. I love her style. She is every bit as sweet and talented as I suspected that she would be. The first day we decorated small glitter jars and mostly prepared backgrounds in our watercolor field journals. She had lots of different paints and pastels and fun little add-ons like beads for us to use. We did a few drawing exercises during the class of grasses, twigs, and leaves. It was a lot to take in. 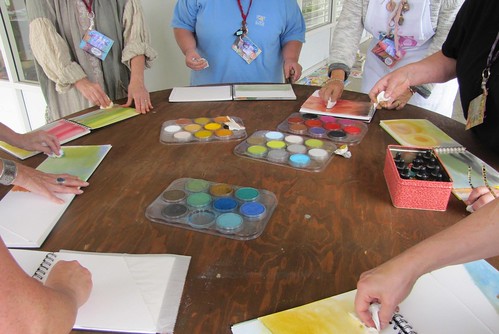 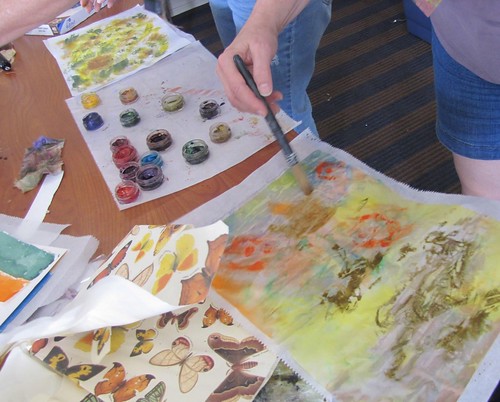 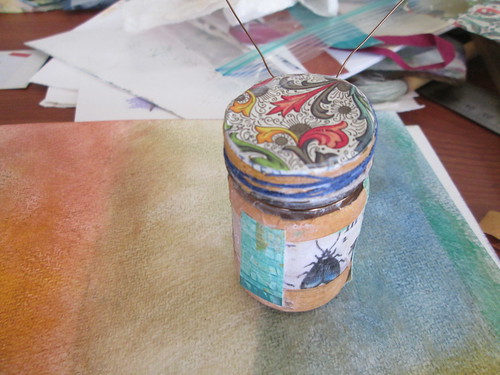 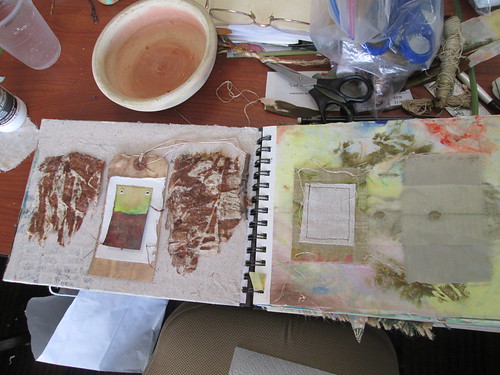 Honestly, I was so deeply involved in the making of my journal in the classroom that I didn’t take a lot of photos of my own work, but there are photos of my classmates’ work on my Flickr page. I did manage to pour a cup of white wine on my new friend Jodi’s expensive camera AND her journal at the end of the class while taking photos. I was absolutely mortified, but fortunately the camera survived and Jodi was very gracious about the whole thing.

I’m about to head out west again, this time with my husband to visit family in and near Denver. Sandy will fly back home on Tuesday while I hop another flight to California to attend Art is You Petaluma. I will be glad to see my family, but I just can’t get up much enthusiasm for the retreat afterwards. Usually I am pawing the gate. Now I would rather come home and paint the new bathroom, get the house put back in some kind of order, and weave. I’m feeling low about Mama and the big tasks on the other side of this trip, but I paid too much for this retreat to skip it due to moodiness.

Some good news: the bathroom should be finished by the time I get back, except for the painting and window treatments. I have a loving pet sitter so I won’t worry about my critters. I’m caught up enough at work so that I should not have a huge pile waiting for me.

I know that once I get there I will thoroughly enjoy myself. I went to this one a couple of years ago and it is really one of the best, in a beautiful Sheraton which is also a marina on the Petaluma River. I’m taking classes with three artists who I really like. I’m splitting a room with the retreat vendor and she lives in Petaluma so we will probably use the room at different times. The weather forecast is great for all of it. I will get a little alone time. I will even enjoy the bus ride from the San Francisco airport to Petaluma.

I’ll come home with a couple of fabulous journals, a little more knowledge about watercolor and mixed media, a few new friends to bombard with Facebook posts, and some grand memories. That’s the good life for me, and I’m grateful that I can do it. Of course, I’ll blog it here because that’s one of the best parts of traveling – reliving it.

My art retreat was over on Sunday, September 23. After saying my goodbyes to Albie and Ricë, I slipped away while the others were in their Sunday workshops, with a bit of envy. But not too much, because I was about to spend the rest of my day with my fabulous friend Cat, who moved out west from North Carolina several years ago. I walked a couple of trails in the marshland park next to the Sheraton Sonoma and Petaluma River. There were pleasure boats passing by and fellas fishing on the banks. It was a quiet place and I sat and wrote in my journal while I waited for Cat to pick me up.

Aahhhh, it was good to spend a few hours with Cat. She always refreshes my soul, a source of glowing energy. We talked and listened, got a little lost, rode around in circles, and enjoyed every minute of it. We stopped at Nicasio Valley Cheese Company and bought some soft cheese for a picnic that never really materialized so I eventually had to toss it out, but I tasted some great cheeses for free and they had other good local organic products too. We wandered through the little town of Point Reyes Station and finally made our way out to Point Reyes Lighthouse, passing a herd of tule elk on the way.

Not quite ALL the way to the lighthouse. It was very foggy and you could barely get a fleeting occasional fuzzy glimpse of the waves beneath the cliffs. Since the steps down to the lighthouse itself was the equivalent of a thirty story climb, we decided to skip it. You know how I love wind and water shaped rock? That was a good place for it, high above the Pacific Ocean.

Isn’t she just gorgeous? I miss her.

Then we went to Point Reyes South Beach, which curiously, was north of the lighthouse, but, hey, everything’s relative, right?

That’s not rope, it’s a kind of seaweed they have on the Pacific coast.

We found a cool little stream with lots of piled up driftwood logs. There were multi-colored succulents and wildflowers everywhere too.

Then we drove back to Petaluma where we met up with Amy, another N. C. girl, and ate dinner at Central Market. I couldn’t leave without drinking some local wine and I already knew how good the oysters are in that area. I had the rainbow trout after the oysters.

Then there was a bit of slapstick when we rushed to the car to get me to the bus station in time for the 8:30 bus and I couldn’t find my purse. It turned up at the restaurant bar where we had first been seated. So I took the 9:30 bus to the San Francisco Airport, and ended up being there in plenty of time for my 11:50 flight.

There must have been a family named Young waiting for stand-by on my flight. Either this was unfortunate or somebody at the computer had a wicked sense of humor. Or maybe I just have a twisted mind. Either way, F. You seemed to be out of luck.