Last Saturday we drove to Elkin where I picked up the beautiful little tapestry by Joan Griffin that I bought in June at the Tapestry Weavers South show. Our neighbors here in Greensboro bought an vacation place in an RV resort about thirty minutes away close to Stone Mountain, so we met them for lunch at Southern on Main, a really great little restaurant, then followed them to see their place. It is an RV park model, so it is firmly in place with a big porch and deck and storage building, very much a tiny house rather than an RV. We were impressed but agreed that we would not like to live quite so far out. They are there about half the time now so they really love it.

On the way back the road was blocked by the biggest rafter of wild turkeys I’ve ever seen, about twenty. (Yes, I looked up the correct name for a group of turkeys. It can also be “flock,” but I like “rafter.”) Once they moved off the road we pulled over and I got a photo. If I had had a gun instead of a camera we could have easily had turkey dinner that night. They were pretty complacent about any potential danger. Later, our neighbor told us that Traphill, the little community we were near, was named for the traps that were set out for wild turkeys. 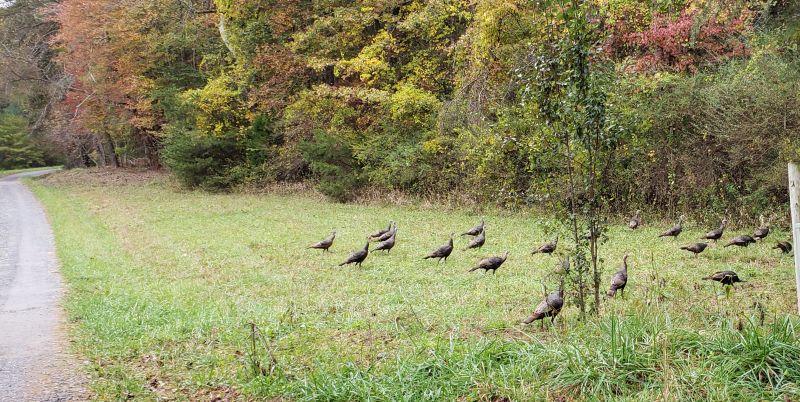 Then later this week, I awoke to hear what sounded like a little yappy dog running by my bedroom window and into our back yard, but it sounded a bit off and there was no human running around trying to catch it. I did a bit of research and confirmed that it was the bark of a red fox. I would not mind if these foxes took up residence in my back yard at all, although I feel a bit sorry for the rabbits who have almost been tame companions back there all these years. Maybe the foxes will take care of the groundhog population explosion.

Then, one afternoon just before our first frost, as I was crossing the church parking lot on my way home, the pastor was standing there with a couple of people and I saw that he was standing guard over a black racer that was crossing over to the bushes. I hope this snake got hibernated in a cozy hole soon after this. It was so long and elegant.

Last night I heard the hoo-hooing of a barred owl.

You’d never guess that I live in a neighborhood next to downtown Greensboro.

Coffee with my nephew, Rascal.