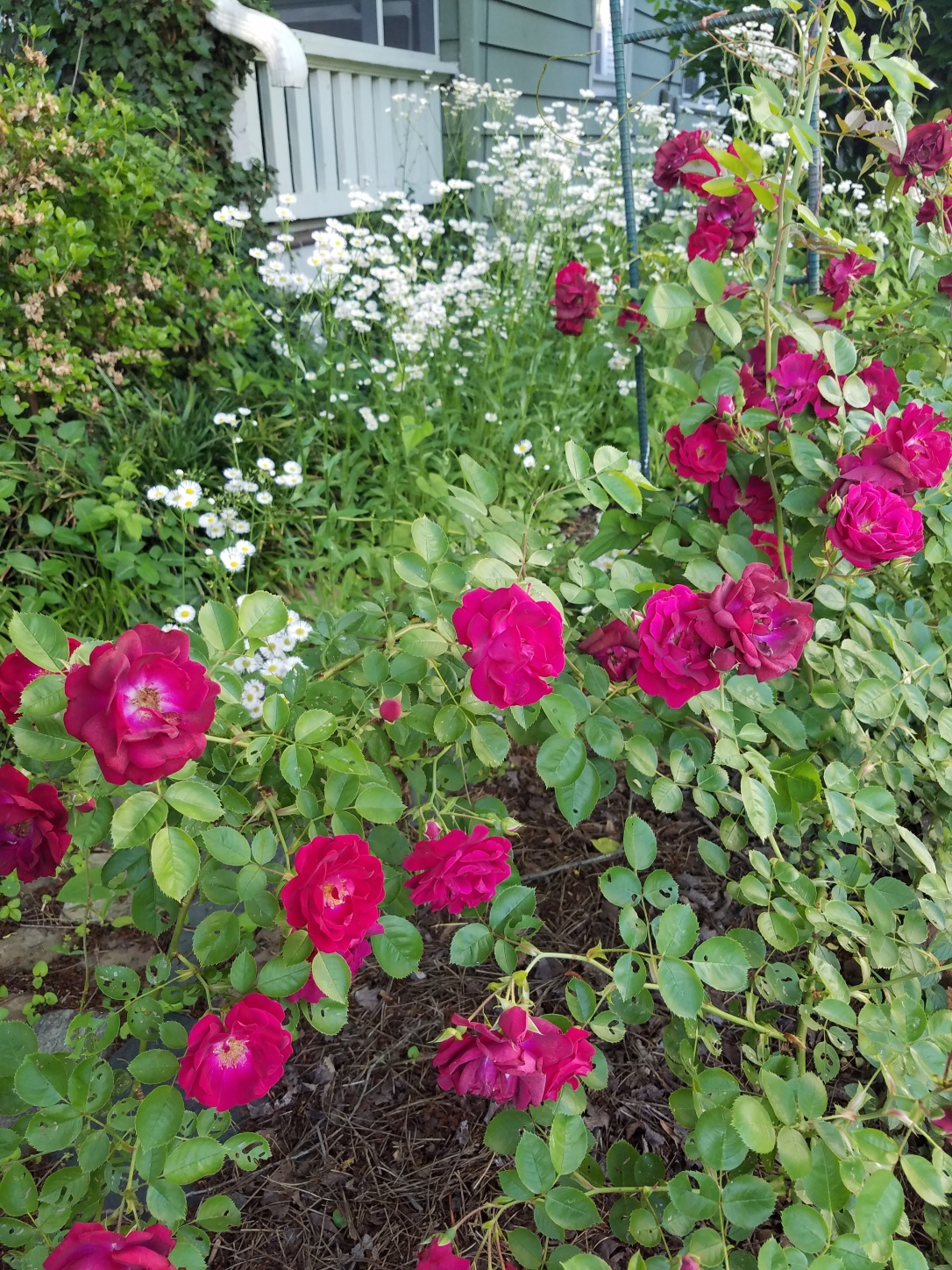 Writing on the front porch, working from home still. Soon, that too will be a memory. This is the climbing rose that is technically on my neighbor’s property. I saved it from the landscapers that plowed up everything else because they think that two foot strip is on our side of the property line. We are going to see if we can root some of it and plant some in the back forty. It has a lovely smell. And of course, there’s the daisy fleabane that I let grow each year as a backdrop.

Like most people, I have mixed feelings about the new CDC guidance on wearing masks. On the one hand, I am happy about it and tend to trust the scientists. On the other hand, there is no way to tell if an unmasked person is vaccinated or is being a maskhole, so I’ll continue to be cautious and wear a mask in inside spaces and in crowded situations, but mainly, I’ll avoid crowds and inside spaces the same way that I did before. Plus, I am not yet sure what we will need to do about masks with Sandy’s medical situation, although the doctor did say it should be fine to go to Europe in September.

However, Sandy and I did eat dinner inside the Green Valley Grill at the bar last night for our anniversary. I knew that they were a safe space, and they had spaced out their tables and put clear plastic dividers every 2-3 seats at the bar. I had the pecan crusted trout – I always have the pecan crusted trout, I should try something else but it is so good – and Sandy had the Athens pasta.

We toasted my friend and colleague, Karl Schleunes, a retired historian of the Holocaust who passed away yesterday. I already miss Karl. He was a kind and funny man, a good friend. When I first began at UNCG, he was the associate head and I was his admin, then he was interim head the next year and his admin was on maternity leave, so I had a great working relationship with him as well. I never, ever was made to feel that I was anything but his equal, and that was rare in professors of his generation. Since his retirement, he stopped by our offices to visit often, and took “the history girls” out to lunch once or twice a year. I miss his smile and deep soft voice and chuckle.

Yesterday I mainly rested my feet, but we went to Deep Roots for groceries and Sandy rearranged the “living room” to a cozier, less cluttered space. Well, it will be less cluttered. We are still working on that part. It is embarrassing for us to have anybody come inside.

Sandy is starting to sound enthusiastic about going to Europe so I think that our situation will turn out okay as long as Europe lets us in by September. If not, I’ll cancel everything and we’ll figure out something else.

On Saturday afternoon I did a lot of weeding and filling containers with potting soil and adding a big bag of raised bed soil that Sandy had bought last year to the new hugelkultur bed. I’m still not sure what I will plant there, considering I watched four little groundhogs playing in and out of the holes in that cement block wall in the background this morning. One climbed a tree. Maybe basil. I planted pink Brandywine tomatoes, hot banana peppers, and jalapeno peppers in the remaining containers. There is still a whole lot to do, including killing a healthy stand of poison ivy growing around the maple stump. 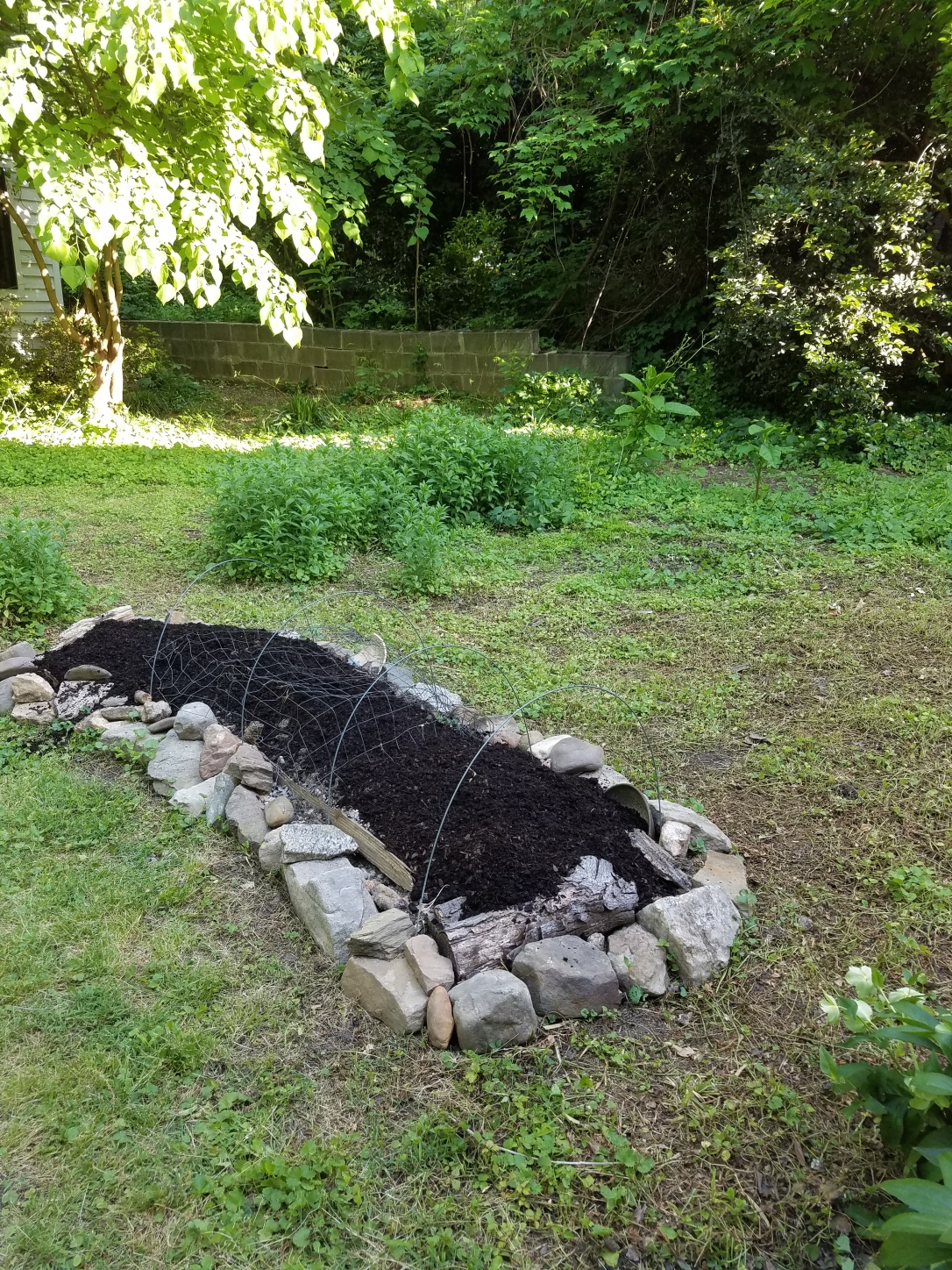