On Saturday morning I worked on collages again. They are still in progress, but I may be close to finished with this one. It tells a story about choice. I pulled the text out of a Victorian novel called The Brown Eyes of Mary. At first I intended them to be random blocks of text, then I realized that I liked the way they pulled my imagination when combined. So this is a “choose your own relationship story” collage.

One choice I made was to pull out the silver wrapping paper so that it showed at the bottom. I think that I might glue some very small snippets of silver near the right top side.

Stitching on it later? Maybe.

I also played with a collage that I’ll share later, maybe. I deliberately chose a bright pink that I normally would not use in order to loosen up and not get attached to the materials. It is a good exercise.

Later that day, my friend Joe, who is a luthier, came by with Susanne and delivered my woodrow that he has been working on. A woodrow is basically a dulcimer that you can play like a banjo. Sandy bought it for me for Christmas in 2012. I don’t know how to play stringed instruments, but I’ve noodled around on it from time to time and it is pretty easy to play. Joe made some improvements and added a couple of knobs for a strap. He might teach me how to play – I just don’t have enough hours in the day to do everything I’d like to do.

After that we all went to see the Alison Saar exhibit at Weatherspoon Art Museum. So inspiring and powerful. Made me want to do wood and linocuts again.

Sunday night was the twice-postponed Gordon Lightfoot concert at the historic Carolina Theater in downtown Greensboro, which is a superb venue for music. Gordon is 81 years old but still held his own in a 90 minute concert that was the last of a nine show run before he takes a break and does it again. His voice was not as powerful as you might expect but was still wonderful. He did most of his big hits and a few deep cuts. We were impressed.

Before the concert we went to M’Coul’s Irish Public House and took goofy selfies, as we like to do. The concert photo is not good, but I decided to take only one quickly and then put my phone away and allow myself to be fully present for the concert. 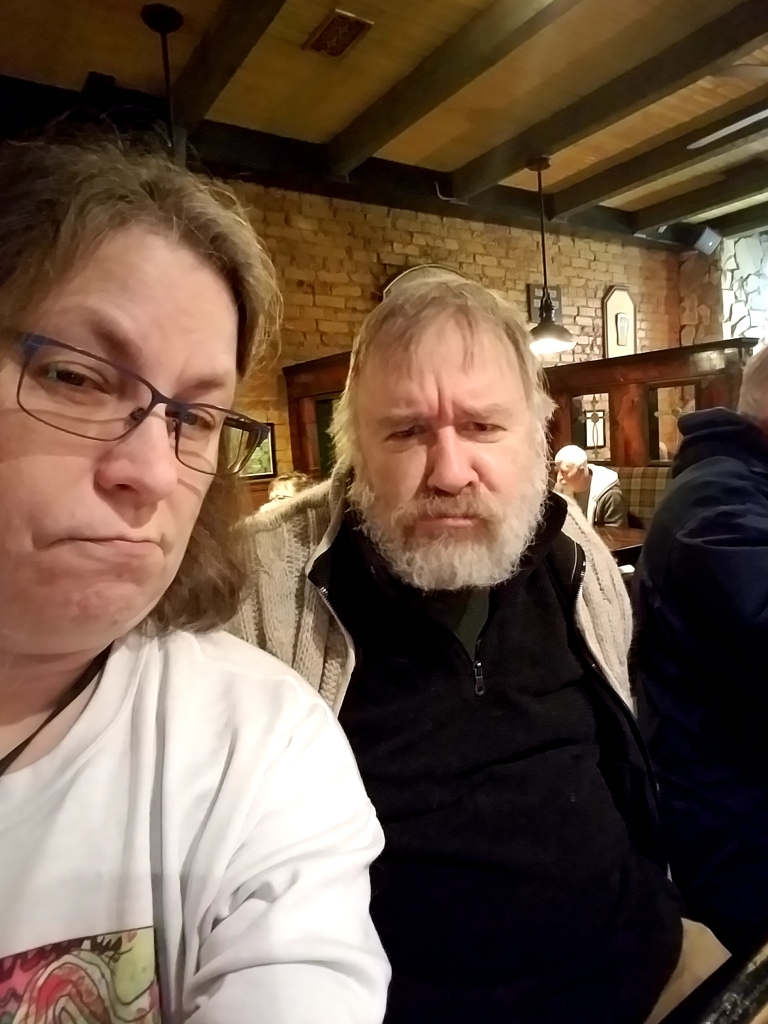 Other than that it is a very busy workweek and I came home extremely anxious, mostly about political commentary I’ve seen, so heading to bed early.