Well, first off, I thought that I had made the last post here private, so if you read it, :::::sigh::::: my first impulse is to apologize, but I won’t. I needed to get some stuff out of my head and to do so I addressed it to the world. Posting it made me feel better, and now it is private, so if you don’t know what I am talking about, good!

Anyway, this week one of my friends that I rarely see on social occasions any more told me that I should find my own drinking buddies. It was kinder than it sounds…I won’t go into the reasons why the two of us aren’t drinking buddies any more but they are wise, necessary, and mutual. The problem is that most of my friends my age either don’t drink beer, don’t or can’t go out at night, or spend most of their spare time with their partners. One of my very best friends moved to New York. My younger friends tend to be ruled by family obligations – either babies, young’uns, or old’uns. So that is frustrating sometimes because I really love going to breweries and taprooms and trying new beers. And it looks and feels weird to do it by myself. It looks terrible if I go out with a male friend, although I never used to think twice about that. Sandy will go with me but often I sense that he is bored and would rather be somewhere else.

After work I was out with a few co-workers and ran into one of my old “drinking buddies” and she came over and hugged me and we will get back together sometime soon. Maybe she read the post? And Wednesday night Sandy and I went to Oden Brewing which is practically just down the street, played rummy, ate fries from a food truck, and listened to live music. That was fun and helped pull my mood into a better direction.

The fact is, I have cut way down on my drinking except for this week when I took a deep dip in spirits, and it is a trend that I need to continue. Drinking and depression do not mix well although it did help my anxiety! Politics, work issues, and weather made a perfect storm this week. I am horrified at the state of our government, as are most people I know. I can barely even think about it without crashing. This is also the anniversary of a tragedy that took the lives of two friends.

Last night Sandy made our signature seafood pasta dish with very little help from me. I sat in the studio/keeping room and answered questions, played with Pablocito, and got my new phone activated. HOORAY! I have a working refurbished phone with an unbroken camera lens for the first time since May 2018. I wish I had done it earlier, but I thought that I would be able to get a free phone at the end of my contract. Turns out that they don’t do that anymore.

I can be quite a miser when it comes to being able to finance my art retreat and travel addiction.

So. Today. I am going to go to the farmer’s market with Sandy, then go to Leon’s Beauty School and get my hair cut. I am tired of it. I am prepared for it to look a lot grayer, but I’m not going to dye it yet. I bought a phone and a laptop this month and I like to keep my credit card paid off. When and if I do dye it, I will do some kind of fun color.

I will attempt to get some artwork done. I dreamed about weaving on a loom last night. The looms and weaving methods in my dreams are always so strange and fascinating. In this one, though, I was struggling to add on to a warp in a weird way because I didn’t have enough of the right colors, but I was determined and I had worked on it for ages. Then a friend of mine walked over with a big pair of scissors and like a flash cut the whole thing off at the front beam. I was shocked and he explained that it was never going to work and he was doing me a favor. Then I was relieved that I wasn’t going to be dealing with it any more.

Tomorrow I need to do some cleanup on the UNCG garden plots and decide if I am going to rent them again this year, as I was sent an invoice for them yesterday. I probably will. I have a massage scheduled for late afternoon.

Monday is my birthday, and we MIGHT go out for oysters that night at Full Moon Oyster Bar. I’ll see how I feel at the end of the day.

Tuesday, I get together with my buddies from the Tiny Pricks Project, which has morphed into a monthly meeting of really cool fiber artists/crafters at our homes. A lot of these artists are also musicians or have partners who are musicians.

I’m still working a couple of hours a week on shifting my photos from Flickr to this platform, which also means changing links. My routine is down, so it is faster. This past week I shifted over the Alaska cruise from 2009. This week I started working on the Ireland 2012 trip. Wow, did we look younger!

I think that I will post this jewel from our Alaska trip in honor of the late great Terry Jones. 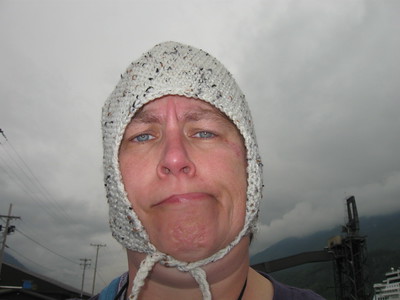 So things are better, but my mood swings are fairly severe. I’m going to try to journal here more, but you may not see it. As much as I want to put my mental illness out into the world, sometimes it is a bit too hard. I do think that it is important that we talk openly about it. It helps people like me get help. I wish that I hadn’t waited so long to get medicated. It made such a huge difference in my life, and I might not even be here now if it hadn’t been for that.

Photos will ratchet up from here on out too.