On Saturday morning we headed back to Chimayo. I wanted to visit Centinela Traditional Arts, the home gallery and studio of the tapestry artists Lisa and Irvin Trujillo. I had seen Irvin’s work at the Denver Art Museum and while we were there, Lisa was weaving on a floor loom and her daughter spoke to a Road Scholars group about the history of tapestry and blanket weaving in the area. The heavenly scent of freshly washed and dyed wool wafted through the building. I miss that. I bought a couple of small purses.

We had lunch at Rancho de Chimayo again, mainly because Sandy had left his credit card there, but also because we really liked it the first time! Those sopaipillas with honey, mmmm. 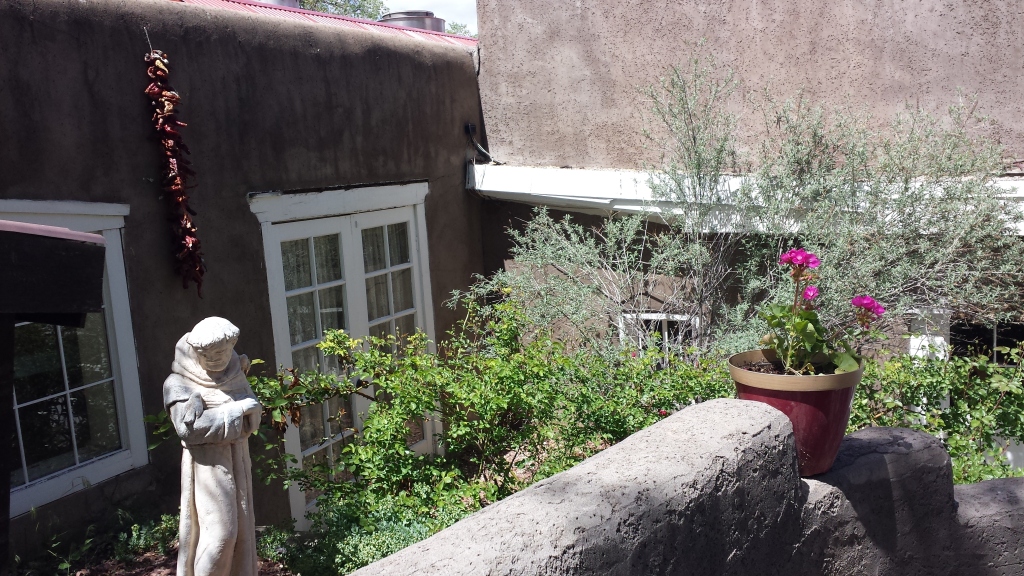 Then we went to the famous Sanctuario de Chimayo down the road. This church is known for being built on ground that has healing powers. The chapel has a small pit that pilgrims take dirt from and rub it on their afflicted areas and pray. There is a room with a rack of crutches that people left behind just outside the room with the pit. I’m not a Christian, but I figured since I was there it wouldn’t hurt to give it a try. So I followed the lead of the person in front of me and rubbed the dirt on my hands, but I had to decide what to pray for. I decided that while I have several physical problems, if I could heal my depression, I could deal with the other stuff. So I asked the Holy Spirit to heal my spirit. So far it seems to have worked!

We stopped by Ortega’s Weaving shop on the way back to Truchas but it was nice but a bit too commercial for me. There were plenty of galleries open on the High Road on Saturday, so we headed back to Truchas.

Reflections on the canal at Lake Waccamaw
It's the coots! Buffleheads moved on. Wouldn't you?
Morning, with buffleheads, but I didn't catch them in the photo.