I have been absent from the blog lately. April seems so frantic at work that when I get home I want to read a book or garden or do something creative with my hands or just sit on the porch, where we have lost the wifi signal. I definitely don’t want to sit in front of a computer screen. I don’t even want to watch TV or movies, although we have been watching Outlander and American Gods this month.

Tomatoes and peppers and flowers are coming up in the greenhouse. I planted the leeks, onions, garlic, and chives last week. Bobbe gave me some walking onions and hardneck garlic so I will have three kinds of garlic and two kinds of onions. 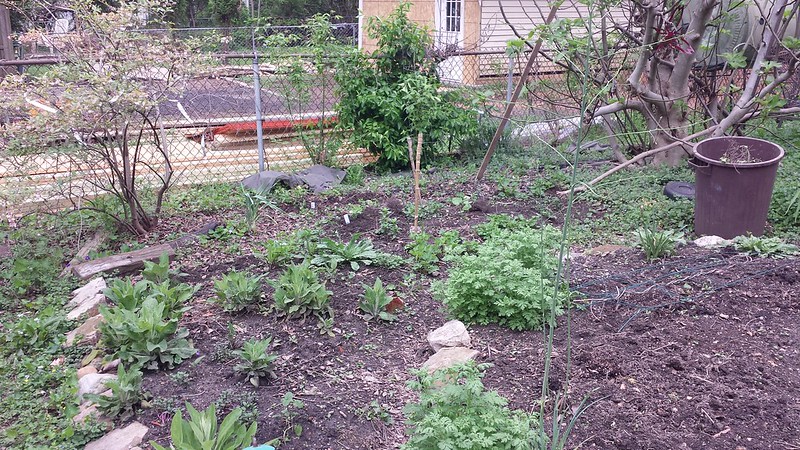 I don’t usually get any fruits from my garden but I continue to try. The birds get all the blueberries as soon as they turn red (bush on left). We have to race the ants for the figs, but usually we are able to get some (bush on right). In between, I have planted a raspberry cane and two elderberry bushes. The seckel pear tree will probably get cut down this year, since it has some kind of disease and squirrels got all the pears before they were ripe anyway. If nothing else, I do feed the wildlife around here, even if it is unintentional.

For next year I am going to plant a lot more asparagus. I let this little bunch that survived the transfer from Wharton St. go to seed. The groundhogs don’t seem interested, so that means it gets a large space in next year’s plan.

Also in this photo: lots of foxgloves, feverfew, and peppermint. Again, this garden has been planned around what the groundhogs left alone last year. There are also evening primrose, one hollyhock, echinacea, and coreopsis.

The pineberries that I transferred from Wharton St. last spring have gone stone cold crazy multiplying. There is some catnip on the corner that gets lots of visits from the neighborhood felines.

As you can see in the background of these photos, lots of work is going on next door. They moved the garage back and closed it in, and now they are adding a room on the back of the house. We are going to put some of the many tomato seedlings, both volunteered and greenhouse raised, in the area next to the fence. I’m pretty sure that the neighbors nuked their side of the fence with herbicide so we will have to see how this goes. 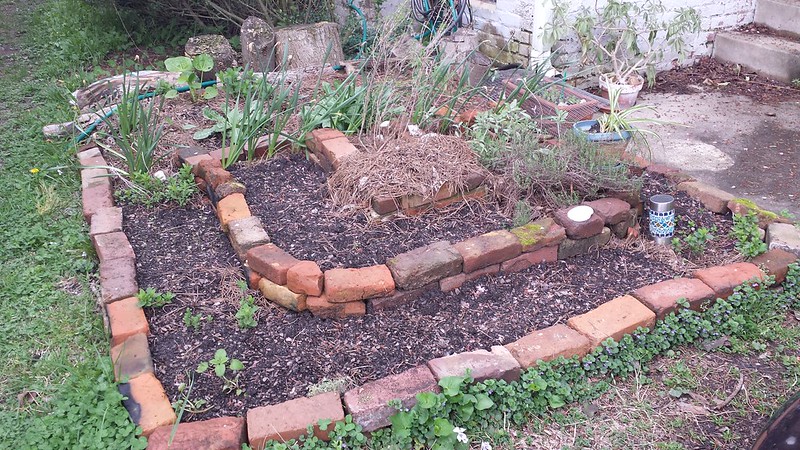 One good thing that came from the construction next door is that I was able to retrieve enough old bricks from their digging to build up my front hugelkultur bed another layer. Great, because the area in the front used to contain potted veggies and the ground beneath that is hard rubble. I planted a lot of mint in the most shallow layer. Chives went on the bottom too. They aren’t happy, but they will probably perk up. Just planted basil, borage, arnica, sunflowers, snapdragon, and milkweed seeds in the past couple of weeks. Some of these seeds were saved and I am just giving them a chance. My friend Anne gave me some clay balls with coriander and curry seeds embedded in them so they’re in there. This should look great by the time we get back from our vacation in May.

The front shade garden is starting to look great! Funny story – a few weeks ago I overheard a friend of ours recommend someone to my husband who “would clean up all this and make it look real nice.” HA! I didn’t say anything.

Concentrating on the sunny side of the front garden now. Planted a eucalyptus here and a bunch of peppermint on the strip between my stone walk and the neighbor’s lawn on the other side of our house. This strip is actually on their kind of the property line. I plan to put potted pepper plants there too. I dug up a lot of the herbs from this side and transferred them to the hugelkultur bed, so it has room to grow. 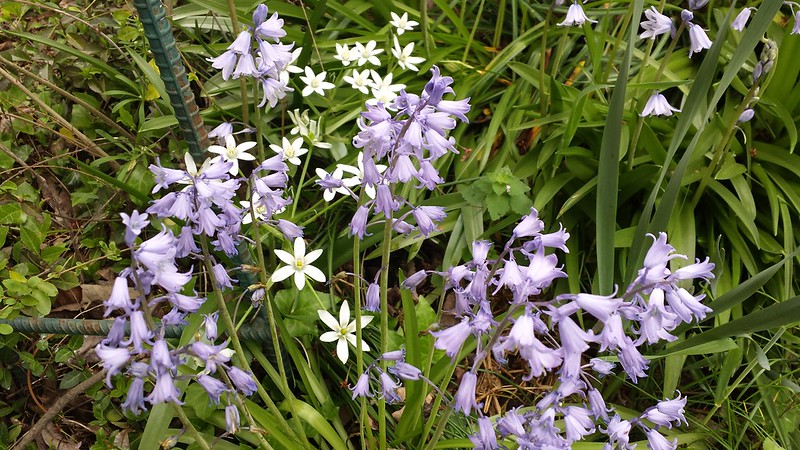 I leave you with this shot from their neighbor’s yard in the front. These bluebells were spared from the tilling and planting of their new grass, mainly because I don’t think that they know this strip is on their side of the line.

At some point I may talk about something other than gardening, but I haven’t finished yet. I’ll leave it for later.