There are so many different names for this collection of superb art retreats organized by Sallianne McClelland. I tend to still call all of them Art Is You because I’m a stubborn old gal, but this particular one was called Talk Story in Stamford, Connecticut. When I saw that Sharon Payne Bolton was teaching and her class was scheduled over our two day fall break at the university where I work, I busted out my tired old credit card and headed north. Here’s a link to the blog post about my previous class with Sharon.

I did not take many photos of the class or the event itself, and that for me is a good sign, because my brain is totally in the present moment and focused on what makes me happy. And God knows we women needed a lot of that last week. Another great feature of Sallianne’s retreats is that she feeds us well. The Sheraton hotel food was excellent. Most importantly, though, is that these retreats are welcoming communities. Many of the attendees have taken classes with the Art Is You family (and they do seem like a family) for years and have developed lasting friendships across the states. This was my first AIY retreat on the East Coast, and Sallianne had pronounced it the last one in this location. There was such sadness and outcry over this that she decided to schedule another one in Stamford in 2020. In the meantime, she has other West Coast and midwest locations in play, and I hear that she might do one in the south.

This art retreat addiction, especially for Art is You and Focus on Book Arts, is the only thing that makes me regret not being rich.

Anyway, the class that I took from Sharon Payne Bolton was called HERTEL, based on a box structure that she designed. One of the boxes had a piece of book cover with the word HERTEL on it and she has a story about someone buying it from her for a good friend of his with the last name Hertel. It was a two day class and she had not taught it before so she was nervous. She is SO dedicated to providing everything you needed, right down to tools and aprons, so that you can come to her class and not bring anything at all if you wish, which is super great when you are flying. I was able to fly with only carry-on luggage. Plus, instead of having us cut all those little pieces of bookboard and paper text blocks for little books, she did it.

I told her that if I could swing it financially, I would be her groupie and follow her around like a stray puppy.

We built the box on the first day, and spent the second day further embellishing it and building little books to go inside. She had Apoxie Sculpt (which I immediately ordered online after the class was over) and encaustic medium and moldmaking materials for us to use. There was a plethora of gorgeous papers, leather scraps, ephemera, and baubles to attach. She taught us coptic stitch for single sheets on the second day, which I have done before but I needed a refresher. 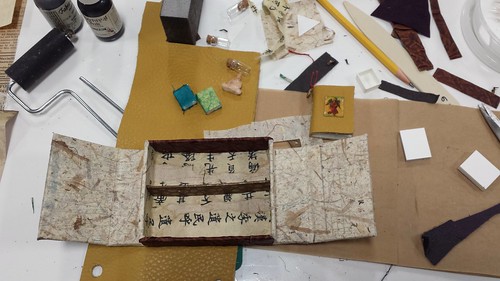 In progress. The “Inspire” pin is a gift from Maria. It might go in another book.

My book, outside and inside: 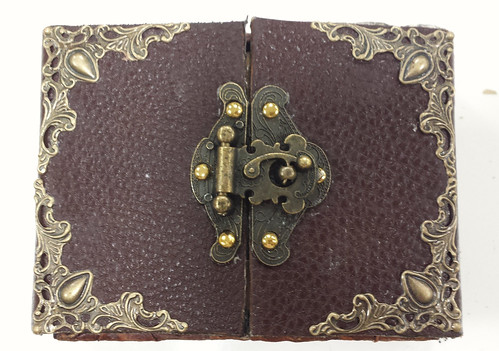 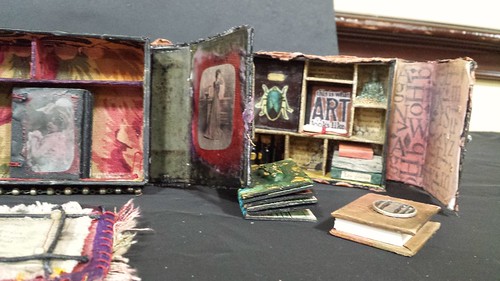 A better shot of Reva’s book: 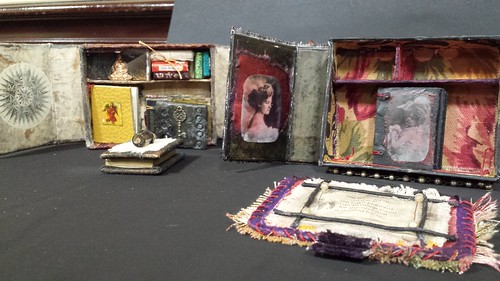 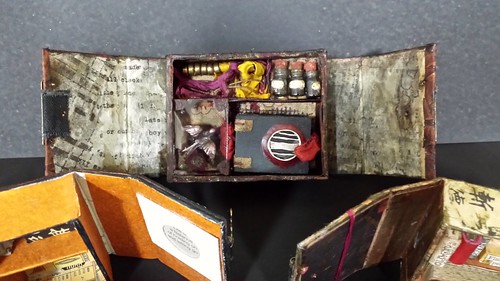 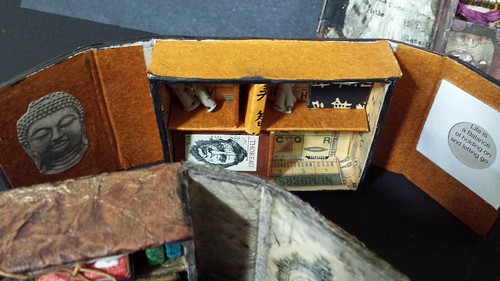 I think that this is Eileen’s book: 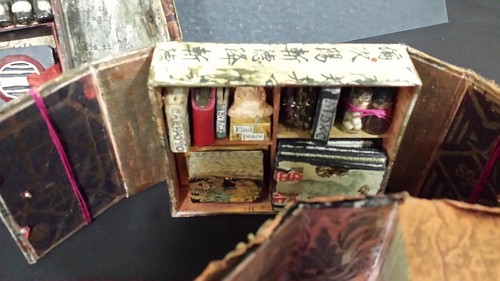 Four people had to leave before we took photos. I wish I had taken photos of everybody’s books because they were all so different, especially some of the ones that left early.

I will add more photos later. My box is at my office this weekend, but I want to show you more of the little book with the key embedded in the cover.

Once again, I came away with not only tons of inspiration, but many new friends that I hope to keep up with at future art retreats and on social media. And five “new” cigar boxes for the studio!