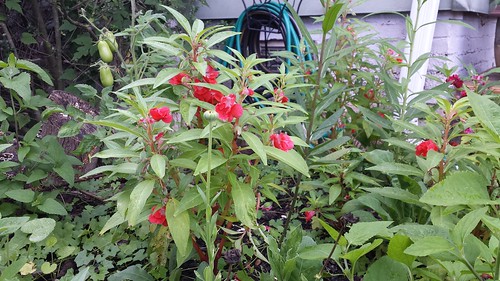 Lots of flowers are growing in this new hugelkultur bed in the front at the end of my driveway, along with lots of volunteer “mouse melons,” tiny watermelon-like fruits that taste like cucumbers. I’m using them as a ground cover – did not plant them. I believe that is a Juliet tomato there that I didn’t have room for anywhere else so I just popped it in there. It might be a Roma. There’s not any fertilizer in this bed. There is mint and parsley and feverfew and calendula. I’ve pulled out the ageratum in this photo. For next year’s bloom there is hollyhock and evening primrose, and the garden balsam blooming now which should reseed freely.

So many cherry tomatoes! And a few Roma tomatoes, although quite a few have blossom end rot despite me putting Epsom salts in the planting holes. Maybe I forgot on that particular one. We have had so much rain and it has been muggy hot, so the new garden bed in the back is lush. I gather tomatoes every day and I try to pick them just as they start to ripen to keep them from splitting, and so that they don’t tempt hungry birds and critters. The ground cherries don’t make it indoors. I eat them on the spot. 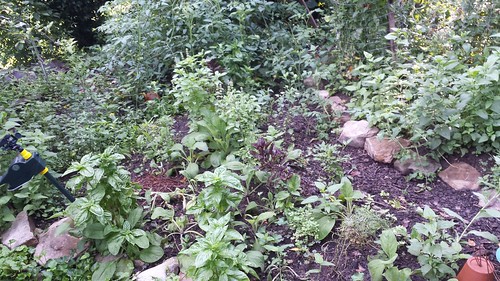 ^^^Ageratum grows everywhere, and I like to keep some to bloom for the bees in the fall, but it’s one of those plants that is selfish and wants all the land for itself. Now that I’ve pulled out most of the ageratum, this bed is devoted to herbs this year. There are three kinds of basil, mint, feverfew, tarragon, borage, and parsley (which was overwhelmed by the ageratum and did not grow well this year). In between there are a couple of dozen foxglove seedlings that volunteered from last year, and a few rudbeckia that survived the groundhog attack by hiding in the ageratum. The celery and kale did not survive the critter attack. The motion sensor spraying device there is out of business, and didn’t work except on humans. There are a few lamb’s quarters left in there that I eat for greens. Next spring this bed will look awesome with foxglove flowers and the bees will love it. Herbs will be shifted somewhere else next year. 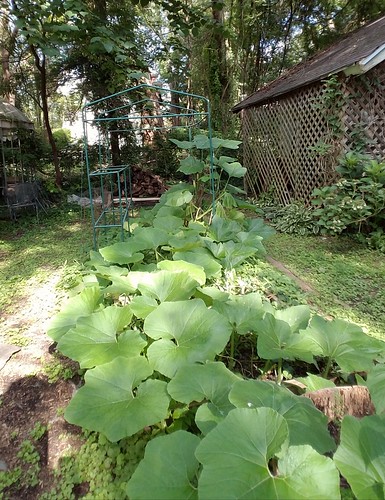 ^^^If I get any candy roaster squash from these vines (I see the harbinger of doom in the back of the photo) they will be huge, like pumpkins but oblong. Right now they seem hellbent on Back Forty domination. No squash in sight so far, just flowers. 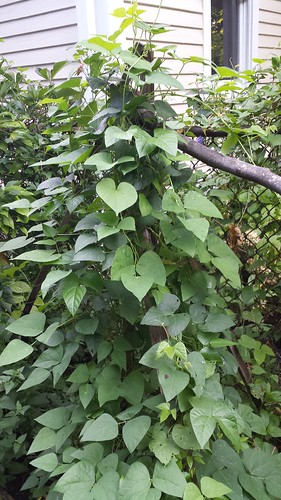 ^^^Butterbean Survivor – there are a few bean vines that survived the groundhog feast, and some of the damaged ones are trying to play catch-up. I’m picking beans now, but only enough to add to other dishes. 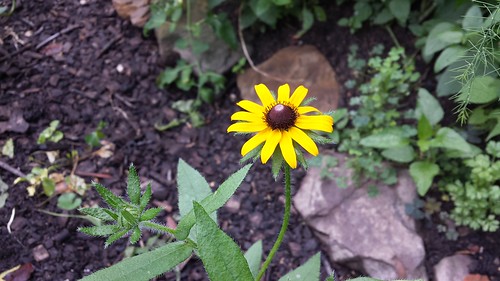 ^^^”Rudbeckia Survivor – The groundhogs think that these flowers are very tasty so I’m proud of this tough little survivor that made it to full bloom.

2 thoughts on “Back Forty Update”