Normally I don’t drink coffee past noon, because of my sleep issues. Today I am breaking that rule. I’ve got a spurt of energy going for me today and I don’t want to lose it!

The tree removal has been moved to Monday. He started on Thursday, and stopped after taking down one big lower limb and the bottom of the sky fell out. I mean flash flood warning heavy rain. I watched from the back door and the white clouded sky behind the limb was like a flash of light as it fell to the ground. I can already tell that these two guys are gonna be good at this, which is a very tricky job. A double trunk, about 80-100 feet tall as I estimate, covered high up in wild grapevine attached to other trees, and way too close to two houses. It’s not a good idea to climb trees with a chainsaw when everything is wet and slippery.

One secondary benefit, because we did not have this in mind when we decided to take down the tree, is that we have a perfect roof for solar panels. The quote we got from NC Solar Now impressed us. We will have to tie in to the power grid through Duke Energy’s meter and pay a meter charge, but in the optimistic view that big storage batteries might get cheaper and we will still have a reliable operating national power grid, it will be a few years before we can think about going off-grid. It’s probably a good idea to try this first anyway. They think that because our power usage is pretty low, twelve panels could cover most or all of our electric needs.

This is one way I can help make the world a little better, and it makes me feel better too. Although I strongly feel that it is too late for us to turn around the tidal wave of climate change – of course it is already here – I believe that we need to do what we can to adapt to the new reality.

It is a good day today. It’s not raining at the moment, which I’m grateful for, and even though I had an awful recurring dream in which I have somehow married an old boyfriend who stalked me for years and I am bewildered and horrified as to how I got into such a predicament, such dreams do make me grateful for the opportunities I have had in my life and the choices I’ve been able to make. I often wonder how things might have worked out if I had made different decisions at key times in my life. So many times I didn’t know it would be a major fork in the road. For example, what if I had chosen UNC Chapel Hill instead of UNC Greensboro? My life now would be entirely different. What if I had not dated another old boyfriend here in Greensboro? I would not have met Sandy, my husband. What if I had not gone to Oregon to take a tapestry workshop with Pam Patrie? I would not have the wonderful friends and connections in the tapestry world that I have now.

Then sometimes I think that what I thought were important decisions really weren’t. For instance, I don’t think that my degree in Studio Art is worth all that much, although that is where I first learned to weave and do woodcuts. I’ve learned much more going out into the world beyond Greensboro and taking classes.

What if I had decided to head out west or emigrate to another country? Who knows how completely different, for better or worse, my life would be?

It’s too late to emigrate to Ireland. I’ve had to accept that. You have to have an income of $55,000 individually or $110,000 as a couple combined. We will never make that much money. Canada doesn’t want retirees at all. There’s not even that option to check on the application. I don’t want to move south. We’ll check out Portugal next year, but I’m realizing that nothing is a given in this world – we can’t know that any place in it will be better than here by the time we are ready to go.

These days, I am looking at aging in place. I still hope to move west to Washington or Oregon, but that will be a while. I am not willing to give up a good job that is secure for now before I get to age 62, and I might have to wait until 67.

In the meantime, our house value is going up, up, up. The house next door sold immediately for an insane amount of money. The new neighbors are currently in Bangkok, where one is teaching at American University. They plan to move in in November, and have arranged for Armando, a young man who worked for them for several years, to take care of the yard. I might employ Armando myself. He thinks very highly of our new neighbors. It all seems good.

Today, it is still humid and the mosquitoes unfortunately did not drown in the deluge. The temperature is still below 90 so we have the doors open and the fans on. I have been to the Greensboro Farmer’s Curb Market and bought peaches, corn, eggplant, yellow squash, potatoes, and sweet peppers. We have lots of cherry tomatoes and some Roma and Better Boy tomatoes ripening in the back, although the groundhogs have eaten a few that are not protected by wire cages. They don’t bother the ground cherries or herbs, so I have those. The candy roaster squashes are taking over the back – if they bear fruit and the groundhogs don’t eat them, they will be huge and a nice source of food for this winter. Not all the butterbean plants were eaten and a few that were damaged are playing catch up. I’ll have a few but probably never enough for two servings or freezing. The few I’ve shelled have gone into soup.

I’m about to slice and dice and fire up the dehydrator, maybe blanch a few veggies for the freezer.

I’m toughening up. I’m thickening my skin. I’m getting ready. I’m also being kind to myself when I need downtime.

Halfway through Bella Poldark, the last of the book series. I will be sad to see it end. Then I will catch up on the TV series. I canceled Sling when the price went up this month, which included HBO. I will miss AMC but I’ll figure that out. That, along with the 2% raise I’m getting, will pay for the solar panels.

Only one photo this time – my new steampunk loom, Rosie, which I need to warp up once I catch up on my Fringeless online class. 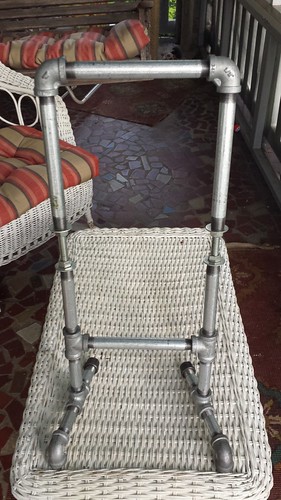