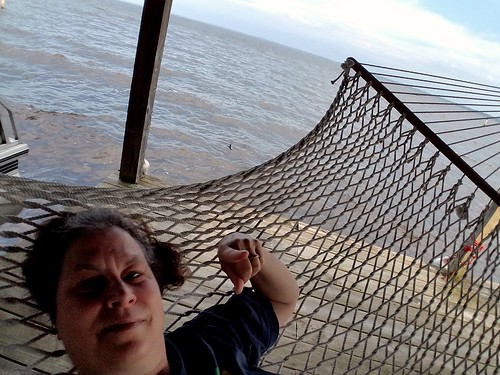 We’ve been home from the lake a week now, and it was a good time. I finished my stitchery for the Gardens of the Heart project at last. We ate a lot of good food and enjoyed good company. I ate at Dale’s three times! 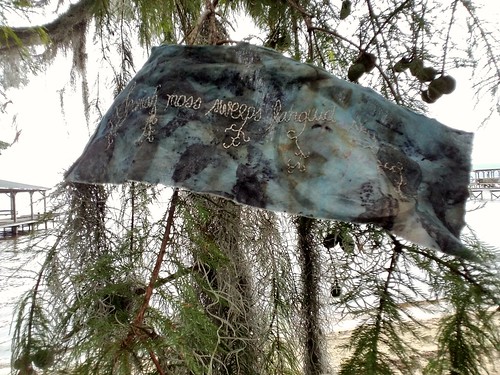 It was fun sitting on the pier and watching this heavy rain storm come through. Most of the time it was perfect weather. It was a bit humid but stayed in the 70s/80s. We turned off the air conditioning for most of the week. 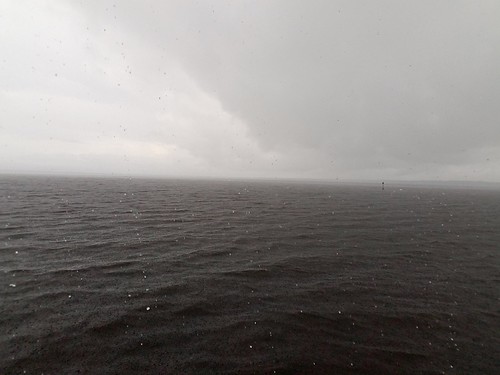 Yesterday I bought the pieces and joints for my new pipe loom. It will add a steampunk flair to the studio. Putting it together is the next thing on my agenda for today.

We went to Ed McKays used book store and I don’t know what happened there but it was a very good thing. Lots of new old books, some that I would have grabbed in hardback if I was still collecting certain authors. Prices were lower…the bargain shelves had much lower prices for better selection of books. We bought a copy of The Passionate Vegetarian by Crescent Dragonwagon for $1.50, now the biggest cookbook on my shelf. HUGE, and don’t you love her name! Also two prequels to the Mists of Avalon, a quarter each. And The Painted Drum by Louise Erdrich. Yes, I know I swore off buying books this year. Some others will go to the little free library to make room.

Finished Four Souls and found that it wasn’t depressing as I feared it might be. It was actually very funny in parts. I don’t think I’ve ever not enjoyed a book by Louise Erdrich.

When we finished errands yesterday I sat down with my t-shirt scraps and worked on the t-shirt blanket. Or I should really say played, because I got into it so much that I lost all track of time and didn’t want to stop! I finished putting together one of the panels for the back side – it will be reversible, but I think of this as the back side. And played with sewing all these little scraps together. So much fun, and I made myself throw away the teeniest scraps instead of hoarding them for paper or whatever. There was a while when my intention was to use up every bit of everything. Nice concept, crappy reality in a small house. I don’t think that I will put a batten between the two layers. I’m going to just sew the layers together in a grid. 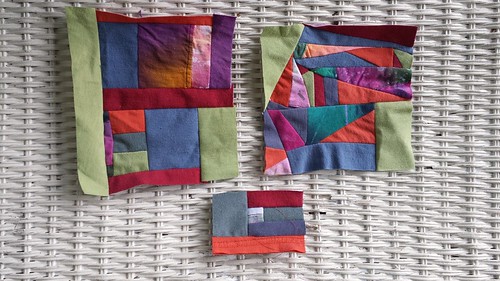 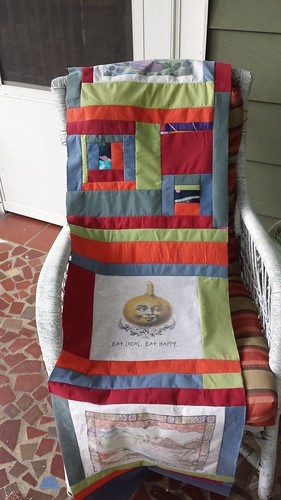 Groundhogs have started eating the tomatoes, even the plants, that are not in cages. Okra is gone. I’m amazed that they haven’t gone after the ground cherries or the huge candy roaster squash vines, but I probably shouldn’t have written that. Tempting fate. I still have lots of cherry tomatoes and the Roma tomatoes under the wire cages. The fig bush is loaded with fruit. With all the rain, everything looks lush but the skeeters have come out.

The silver maple is scheduled to come down this Friday. Mixed feelings. I love trees, but not necessarily this one. There will be more sun for gardening and for solar panels. It will be safer and a good thing, eventually.