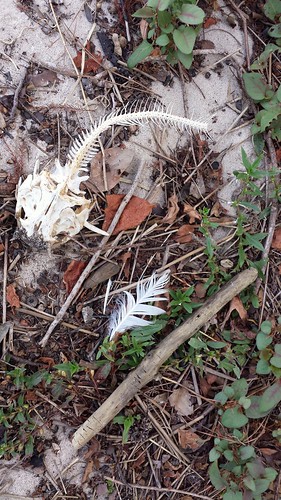 Of course, I mean Lake Waccamaw. I might not be here now. This could have been written one week ago and scheduled to post this week. Ya never know with me. I like monkeying around with dates and times. Wish I could do that on Facebook!

We rolled in mid afternoon yesterday. I meant to leave earlier but I’m having serious insomnia problems. Hopefully that will be corrected down here but not yet. At least I will be able to take a nap whenever I need it.

Today will be a quiet day. I brought down projects. I’m missing some key components, though, so I’m happy I brought more than one. Dyepots, indigo kit, madder, cochineal, watercolor paper, iron, little loom, alchemist’s apron, pockets and trinkets, check.

Reading: “Girl Waits With Gun” by Amy Stewart. A historical female crime fightin’ novel from an author that I began following online a long time ago. I love books set in the early 20th century and this one hooked me from the first page.

Next on deck: “Four Souls” by Louise Erdrich, another favorite writer.

Finishing up: “Zen and the Art of Motorcycle Maintenance.” I think that I will put a folding chair in the water and read this one. I always bring one small paperback that I’m willing to sacrifice to the Wave Goddess if she demands it. This has been a deeply satisfying re-read.

“A person filled with gumption doesn’t sit around dissipating and stewing about things. He’s at the front of the train of his own awareness, watching to see what’s up the track and meeting it when it comes. That’s gumption.”

Family rolling in tomorrow and maybe today. A few friends dropping in later this week. One of them is only a week out from a family tragedy so I hope this place will be healing for her too.

The house has air conditioning now but we turned it off and opened the windows. So far the weather forecast is great, but we know by experience that the lake creates its own weather.

My old Kindle is not playing nice with Flickr right now so more photos will be added later.

More tomorrow. Or was it last week? Ah, a mystery!

3 thoughts on “Another Week at the Lake”