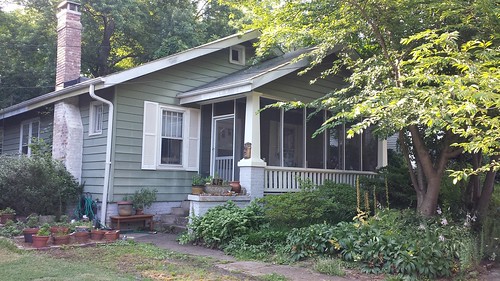 Ugh, what an awful week the past week was. Back to work, bored out of my mind, no mental energy to do anything much when I got home at night other than numb my anxious mind with playing solitaire and watching TV. I spent time researching emigration to various countries, and reading advice from ex-pats online. At least I cooked two nights and got laundry done. Friday night and Saturday was fun, though.

So, my staycation. Yes. I got so revved up about purging the studio that I plunged into it and didn’t do much of anything else for the rest of the week! It was great, though. I doubled my goal of getting rid of five large boxes of stuff. Much of it went to Reconsidered Goods, some went to a teacher at Hirsch Wellness Network, and I’m still putting stuff to the side for Goodwill or wherever. I got all the cardboard boxes off the floor, condensed most of them into one or two boxes, and cleaned the floor and the rugs. It took so much more time that I thought it would, but it was totally worth taking the week off to do it. On the weekend, Sandy and I moved everything off the front porch and mopped and cleaned and repainted a chair and got rid of a lot of stuff that was cluttering it up. Bought new cushions for the swing and the wicker chairs. We found a wicker table at Reconsidered Goods that matches my mother’s wicker rocker perfectly! Pablocito had a couple of tough days because we consigned his wobbly cat perch to the garbage bin, but he seems to have adjusted now.

Because the state of North Carolina often gives its employees extra time off and small bonuses in lieu of adequate pay raises, I am rich in vacation time. For the most part, I love this. I spent years working at places that didn’t give sick time at all, maybe one week of vacation, or they required you to work so much that you couldn’t take it anyway. As I am looking retirement in the face, I can see that as far as my Social Security goes it would have been better to have the salary increases. Sandy and I are making a will, finally, in case that we both go at the same time, and considering our retirement options. Sandy is now on Medicare, and is going to try to wait until age 70 for his Social Security. I am considering taking my Social Security and 85% of my state pension at age 62, which is about five years from now. I can’t leave this job until I get to age 62, at least. Then I’ll look at my options. Sandy deserves to retire and perhaps we will emigrate. It would be best if we did it together. Maybe we will check out Portugal next year. Costa Rica? Sadly, I don’t think that we could afford Ireland. I’d prefer an English-speaking country, since I can barely make myself understood in English, much less other languages. I’ve taken French, Spanish, and Italian, and now I get them all mixed up and can’t even get my numbers right. I realize that we will probably end up here, but I’d like to have the option of leaving. I worry that by the time I am 62, no other countries will let us in, and who could blame them?

I think that the greatest and the worst thing about the staycation is that it showed me a little of what life might be like after retirement on a daily living scale. The difference being that Sandy would be at home all day, and we would probably eventually get on each other’s nerves. It would be nice to have the time and energy to keep this house clean and cook healthy meals, not to mention the studio time I’d have.

Physically, I am better. I saw a new chiropractor for twelve adjustments and there is a big difference in my neck and shoulders. My hips are still a problem, but much better. There really isn’t much more that can be done since arthritis is the ultimate cause and it can’t be reversed. But it can be managed a lot better than I’ve been doing, and I’m not taking nearly as much ibuprofen. There are exercises that I need to remember to do! I have switched over to taking turmeric and I’ll still see both my chiropractor and massage therapist once a month to keep me on track with my progress. My elbow and hands, well, I just have to take a lot of breaks.

Friday night we went to the Solstice celebration at Weatherspoon Art Museum, which is just a block from our house, and saw the exhibits and took a photo in the “photo booth.” There is a film showing there in one of the small galleries on the first floor, migration (empire) that is stunningly beautiful and I recommend it highly. I might go back and watch it again.

We went to the Greensboro Summer Solstice Festival on Saturday afternoon, which gets bigger and more spectacular every year. I didn’t have a good charge on my camera so I only took one photo – I think that this guy had the most impressive costume, although he had a lot of competition. 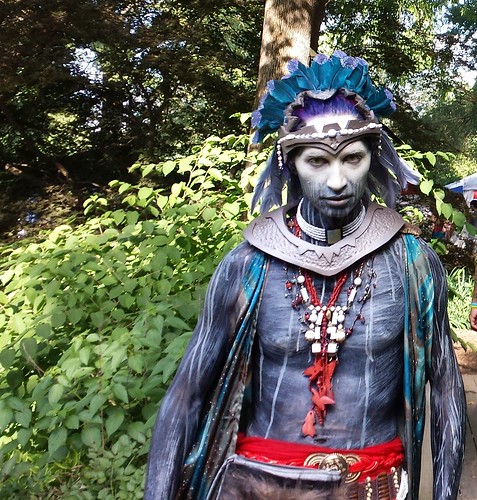 And the Back Forty is in transition. I’ve transferred what lettuce seedlings I could find to the container on the front steps wall, and moved a few tomato seedlings back to where the Jacob’s Cattle beans were. Ground cherry plants have popped up randomly here and there and I’m happy to see them! The groundhog family (yes, I’m pretty sure I saw a baby) are in control. They finally pushed over the wire cage I had staked down over my broccoli in one of the planters and ate the rest of it. Also, carrot tops are gone. So I’m concentrating on tomatoes and herbs that they don’t like back there, like basil and mint. Nothing worked to deter them. The water jet spray, the repellent spray, the flashy hologram tapes hanging from the wire cages and fig tree and blueberry bush, all useless. I hope that I might at least get to eat some of my blueberries this year, but if I don’t, a friend is bringing me plenty from her yard. I don’t have the mental energy to trap them. 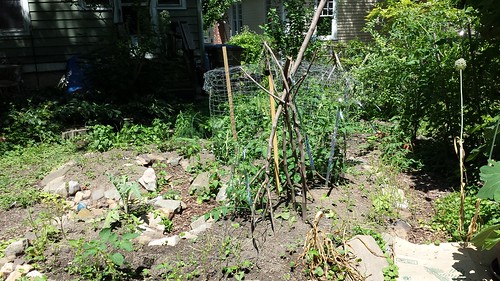 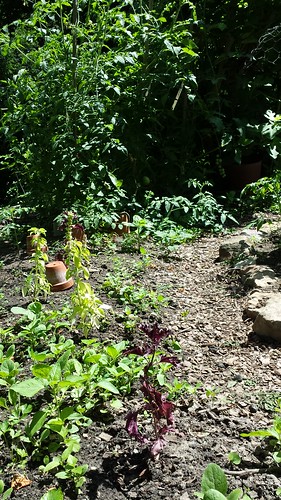 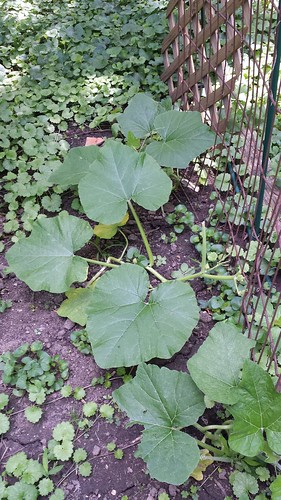 Curiously, the tromboncino squashes are doing quite well in the shade. I suppose that their flowers will be eaten by Woody and company, so I’m not expecting any harvest.

The hugelkultur bed is full of flowers, most not in bloom yet. There are a few hollyhocks that I’ll likely need to move next year. We’ll see. I’ve been moving some plants from the south side of the front yard over to this area since they will probably get trampled when the arborist takes out the silver maple tree in a couple of weeks. 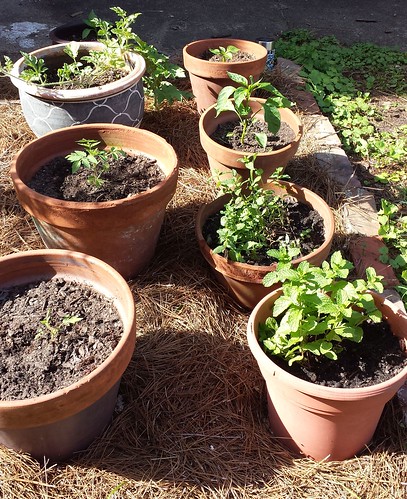 I have a tiny Sugar Baby watermelon and a few ripe cherry tomatoes. It will have to do for now. There will be plenty of Roma and Principe Borghese tomatoes for sauce and drying later this year, and it’s almost time to dig up my red potatoes. 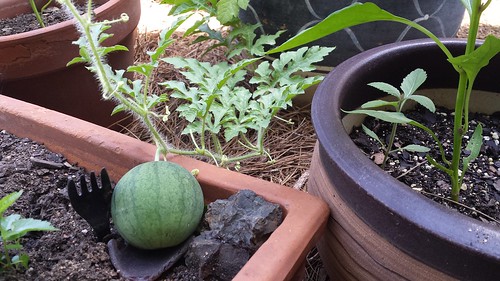 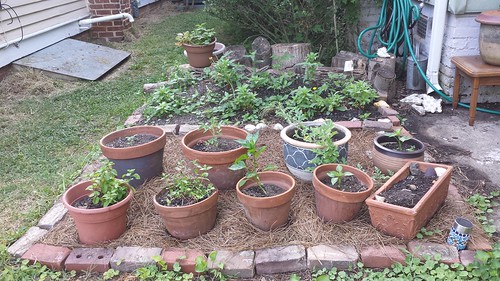