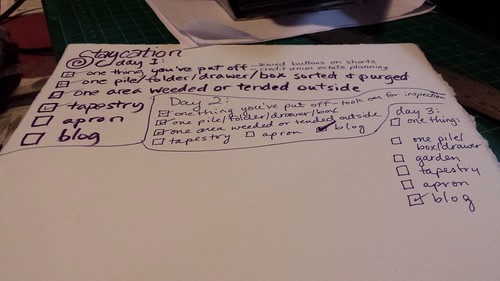 What happened to Days One and Two? They went by in a flash and that’s okay.

Here’s the agenda for my art retreat/get shit done at home week. The idea is that I choose at least four of these every day to check off. The daily checkbox, in priority order:

Today, I’ll probably clean and vacuum the front porch. We’ll see. Trying to stay off Facebook for the rest of the day.

So far I have not played with my apron, so I’d like to do that today, sitting on my clean porch. The weather is lovely this week. I was able to turn off the air conditioning and even give the fans a rest.

Yesterday, I spotted TWO groundhogs in the back yard! This wasn’t a big surprise, but I had not seen them at the same time before. So much for the water jet idea. They munched plants right around it. I don’t think that they are setting it off, although I hear it go off from time to time. They burrowed under a wire cage and ate the broccoli there, right in front of the motion sensor.

My thinking is that this needs to be a year of observation and reassessment of how to handle this. I’m not fond of the idea of trapping and relocating them, but that is still on the table. I’m watching what they like to eat the most – all varieties of greens, lamb’s quarters, broccoli, certain varieties of beans (Jacob’s Cattle and Cannellini), the cucumber vines, celery, the watermelon blossoms, rudbeckia and sunflowers. They also like the wild yam vines and violets, and I wish that they would chow down on only those. They are leaving alone, so far, the tomatoes, butterbeans, carrots, strawberries, pineberries, and herbs.

Now that there is a sunny forecast, I’m going to spray the repellent again. I also hung reflective hologram tape all over the place. I’m sure that the woodchucks think it is pretty, but maybe we’ll save some blueberries from the birds for ourselves this year. Other than that, I’m trying to let it go.

I enjoyed going through a box of fabric scraps and sorting and purging yesterday, and it makes me wants to do some more cloth strip weaving.

Blogging takes up a LOT of time so I’ll probably skip that for the next couple of days.

The tapestry diary is a scene from St. Simon’s Island in Georgia, where I went for the tapestry retreat. I’ve started it from the image in my head and will refer quickly to a photo later. 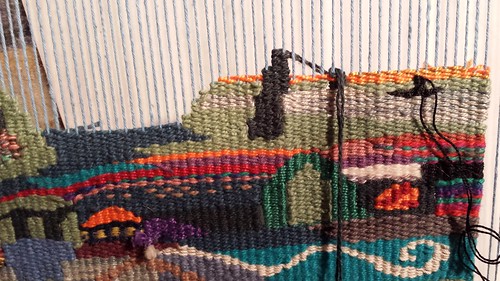 On tap for later today, a massage and maybe a trip to the farmers’ market. Right now I’m listening to an audio panel about Enneagram types 8, 9, and 1. I’m a One, and I’ve been working with the Enneagram for about 12 years now. It makes more sense to me than any personality type system out there.