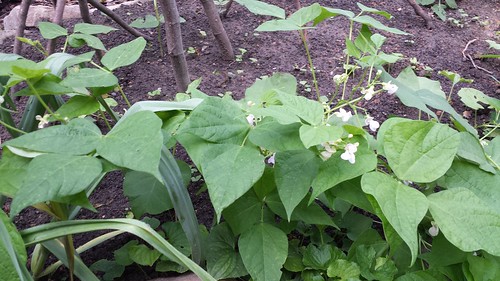 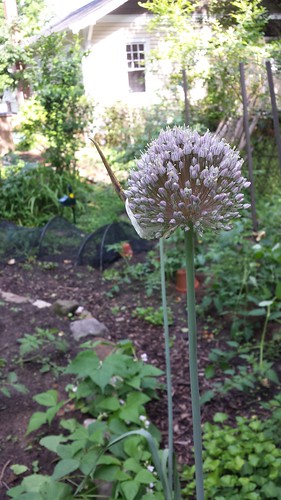 I think that I may be done with gardening for the weekend. Many of the unwanted plants (AKA weeds) have been pulled out, more seeds planted, general clean-up of wire cages and poles achieved, some plants and seedlings transferred from one area to another, and the bean trellises erected. 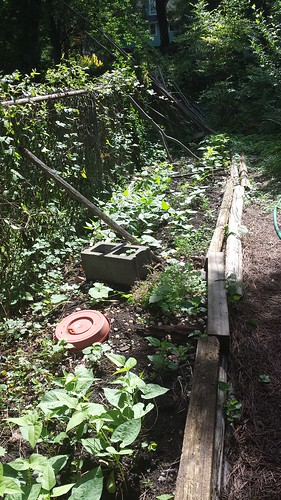 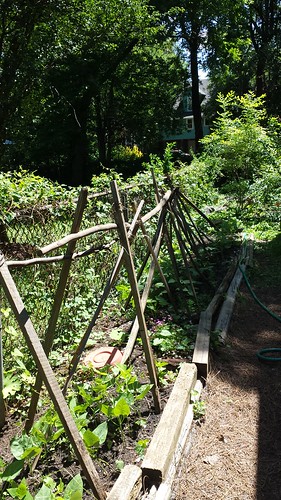 Most of the tobacco sticks I brought from the farm have rotted in the humidity of the garden, but I have saved long poles from tree trimming and house renovation. There are some squash, pumpkin, and watermelon plants in there. I hope that they have a fast growth spurt to get above the butterbeans!

The woodchuck knocked over one of the wire cages last night and ate my beet greens. I may have to set my water deterrent motion sensor lower. This is the first indication of damage since I set it up. There has been heavy rain so I’ll try spraying this small animal deterrent stuff again late this afternoon.

Little tomatoes are on the plants I purchased, and the Romas that I grew from seeds are doing well. I think that the Principe Borghese tomatoes will be healthy too, but I replanted them after killing the first batch. I don’t think that I will ever use peat pots again. These will go in the compost tumbler. The Sugar Baby watermelons have enjoyed the heavy rains and have flowers. So do the Jacob’s Cattle beans.

Pulled out what peas survived the woodchuck. I got to eat about five sugar snaps off the vines. I planted okra seeds where they were, and leaving the pineberries to spread out in that bed over the coming year. We tasted one pineberry each and they were tasty, but gone quickly. I guess I’ll decide after next year if they are worth the space devoted to them, and give them the benefit of the doubt since they were transplanted in late February.

I have decided to plant herbs in the hugelkultur bed near the front door. There will be flowers, mostly garden balsam. I believe one hollyhock has germinated so that may have to be transplanted to its own large space. Since the arborist wants to take the tree out on the south side of the house, I’ve been moving some of my plants to other places so that they don’t get trampled or smushed. So some peppermint, parsley, and a borage volunteer went in, and I planted more basil seed there and several other spots around. I think that I might be one of the few people on earth that has problems growing zucchini or basil. I’ve given up on zucchini, but I’ll never stop trying to grow basil.

Next weekend will be spent in Wilmington and Topsail Beach. Going to a Leslie Marsh book workshop and she will have an indigo vat. She says that if it is not tapped out we can dip a couple of small items/bundles, so I’m going to wait to weave on the silk tapestry until I get some indigo dyed thread to work into it.

After I wrote the blog post yesterday, Sandy volunteered to go with me to the opening reception of the Tapestry Weavers South show at Yadkin Cultural Arts Center in Yadkinville, North Carolina, about an hour’s drive from Greensboro, so I took some photos there. My phone’s battery was weak and some of the photos show it, but I’ll try to get a post up with those photos this week. It is not far off I-40 and the show will be up through July 28.