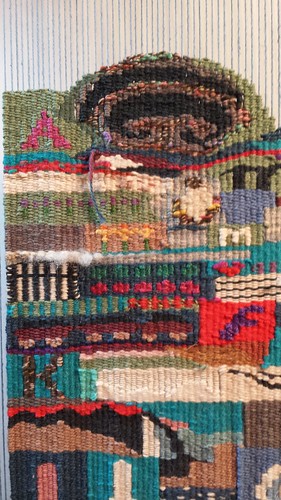 I stopped weaving my tapestry diary near the end of March. It was not fun for me any more. I struggled to find anything I wanted to weave or represent and if I wove about my mood I reached for black and gray, then forced myself to pick up blue and purple and pink and green instead. Then I put down the yarn and walked away from it for two months. Art might be healing for some people, but when I am in a period of depression, I can’t do art. I don’t enjoy much of anything at all.

I threw all my energy toward getting better physically and getting my gardening back on track. I concentrated on fairly mindless things, like stitching around a pattern or bundling fabric with leaves to put into a natural dye pot. That took a lot of mental pushing, although I wasn’t trying for any specific results.

The tapestry retreat was coming up and I didn’t have any project to take with me. I made a design with a snail riding an albatross and decided to weave it on the warp on the other side of the loom that the tapestry diary was on. (This is not a bad idea: the snail and the albatross. I fantasized about weaving a tale about a world traveling snail and her companions who help her. After all, a snail can’t get a passport or buy a plane ticket. It still might happen, but on a different loom.)

I also took my small traveling loom with the seed of an idea to weave with the silk threads I’d recently dyed with my fabric. Suddenly that idea took off and I was in a flow state. I didn’t want to stop working on it. I left the big frame loom with the tapestry diary on it in my hotel room.

When the weavers began showing their work and talking about tapestry diaries, I admitted that I’d brought mine but had stopped weaving it. It was such an encouraging group that I brought it over and got lots of good feedback on how to get unstuck. The biggest question I needed to answer was (and is, to be honest) if I really wanted to continue or if I should let it go.

So, here is the decision: New rules. Most people don’t know this about me, but I have been obsessive-compulsive since early childhood. Most people think of the stereotypical clean freak Sheldon type and that is definitely not me. I am more of the kind that hoards things and has to have things in a certain order, plus some thought patterns and habits I don’t talk about. My ways of coping are better than they used to be. I don’t write about it – in fact, when I started writing this post four days ago, I got to this part and my system crashed. I hide my OCD very well and apparently my brain wants to keep it that way. So be it. I will let the brain have a partial win on this and won’t write the long post that I intended.

I write my own rules in my head for nearly everything, and I believe that limits are good for my art projects most of the time. Otherwise I can get overwhelmed and shut down. This time I got overwhelmed by my own rules.

I thought about weaving a tornado for April, given my focus so far on weather and mood, but chose to weave the new garden bed in the Back Forty instead. And yes, I did unweave the whole thing and rewove it. Good for me.

You know, on one hand, I think that it would be healing and valuable to others to share my mental illness experiences on my blog, and I’ve tried to do so over the years, based on some of the feedback I’ve gotten, especially in the early years when I suffered from agoraphobia and truly was turning my life around step by step, inch by inch. On the other hand, it is just too painful sometimes and I need to respect my inner child’s privacy on this point. Writing about depression is not so bad, but OCD is too much, apparently. That said, I am light years better that I was when I started writing this blog in 2005 and that’s some amazing progress.

The next post will be cheerier, I hope, but if I’m going to keep a personal journal, there needs to be some honesty lest people think that I am one of those incredible people that does it all. I don’t, believe me. I went to bed almost as soon as I got home from work Tuesday through Thursday. I live for the weekend, mostly because I can sleep as much as I need to and have the freedom to be alone. I have long periods of time when I feel like a normal person, and I search out companionship. The times when I feel weird and wish for solitude are not as often or as long.

Okay, time to get some house cleaning done.