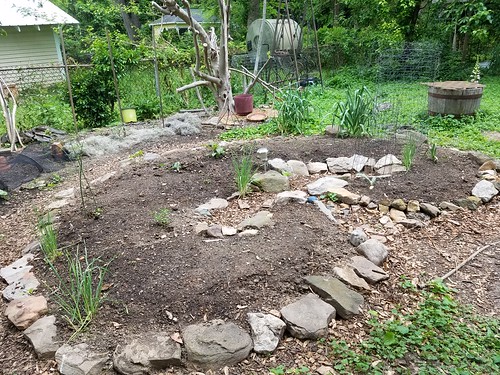 It is such a relief to be at the end of spring semester. I still have a few things to do at work, but all of the time-sensitive stuff has been done. Last weekend we went to the St. Francis book sale, where I blew my “no more buying books” pledge out of the water. In my defense, it was fill a grocery bag for ten bucks day, and I found an old book on Cornwall and a 1925 “The Etude Music Magazine.” Not a bad haul for $12, and I’ll donate some to the little free library now and the rest later. 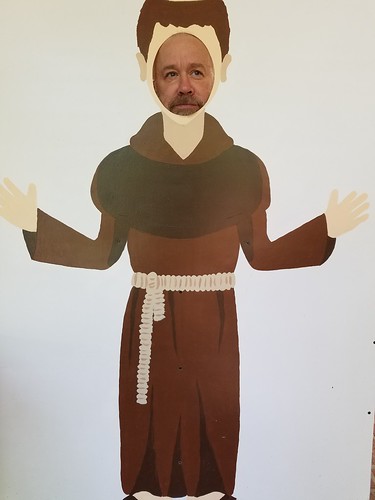 I have said this before, but I have enough books to read for the rest of my life. Seriously.

THEN, when we went to Black Mountain later that day, we found a sweet new bookstore where I bought two NEW books: 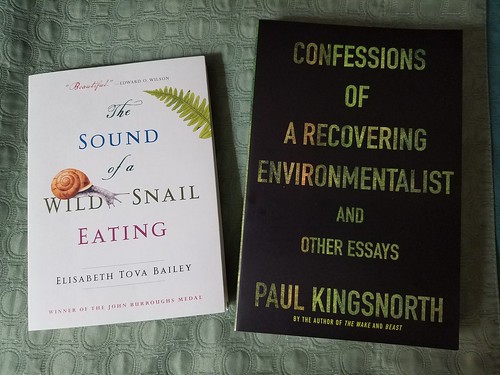 I have a problem, obviously. If you saw my house, you’d understand. However, this addiction might be why our house is nicely insulated.

OH YAY! I hear a good rain shower. I was hoping for at least one today, because I was out of rainwater. Our tap water smells so clorine-y that I don’t want to use it for natural dyeing or my seedlings. My buckets are out under the gutter downspouts. 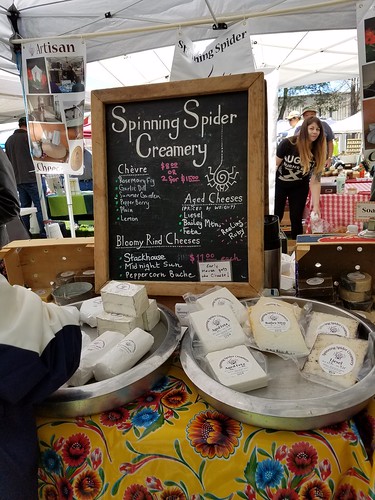 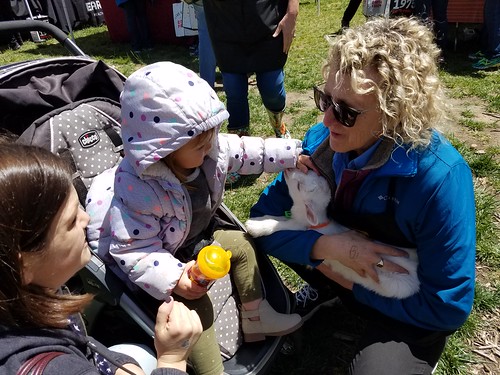 Spinning Spider also brought baby goats and had a milking station for people to milk a goat.

I posted about the tapestry show earlier this week, but we also went to the WNC Cheese Trail Festival held at Highland Brewery in Asheville, and laid some money down for some excellent cheeses. Cheese, books, and good beer. Add coffee and chocolate, and you’ve got my version of heaven right there. 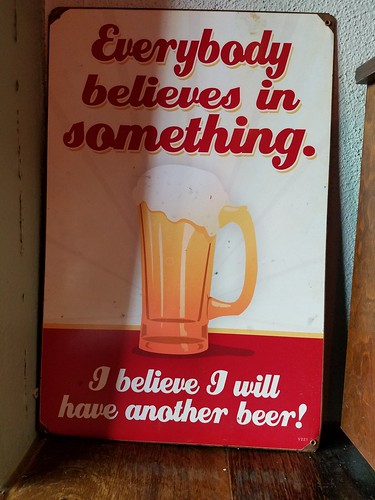 TIME FOR GARDEN PHOTOS!!! I had a lot of catch-up to do in the yard this week. As usual, my garden is way behind. I made it a priority to clean up the mess at the end of our driveway and in front of our front door because the house next door will be for sale soon and I want to attract someone who doesn’t mind hippies but is nice, sane, and fairly neat. At least to the point of not letting invasives crawl all over the yard like on my other side. Ha! They probably think that about me in the back yard. 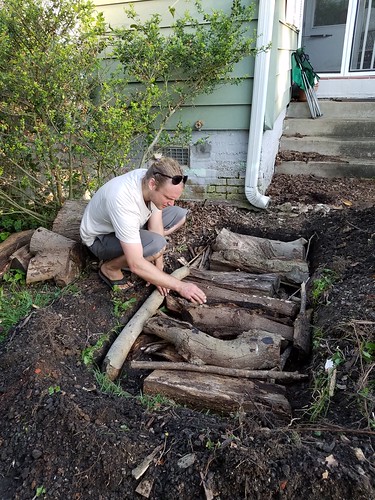 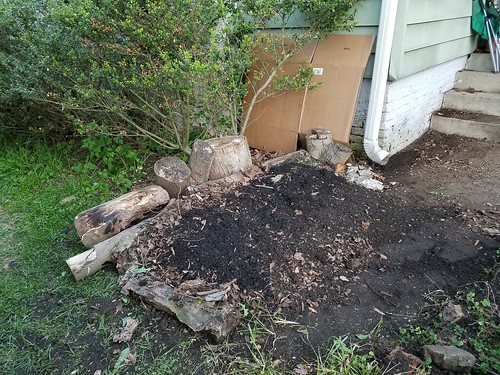 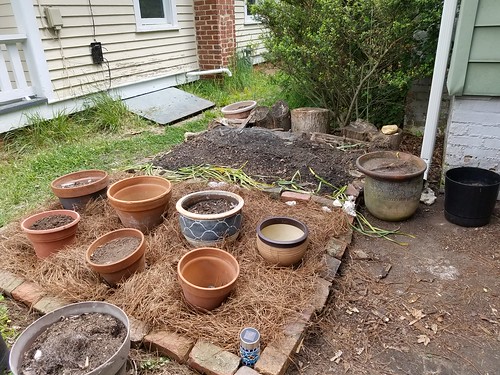 Justin came over for four hours on Wednesday and helped with digging up some problem shrubs, cutting branches back to get more sun on the south front edge, and making a hugelkultur bed with some of the rotting firewood outside our front door. He dug down about a foot until he hit solid clay, filled about a 3×5 foot area with the wood, then shoveled the soil back onto the logs. I’m going to grow flowers in it first, since he says it will be a nitrogen suck for a couple of years. Maybe transfer some clover over to it and plant fava beans late this fall. We’ll see how the flowers do. I planted black hollyhocks, coreopsis, garden balsam, and transplanted a clump of daffodils around the edge. I tossed a few monarda seeds on top just for kicks. The birds are probably going to eat them all anyway. 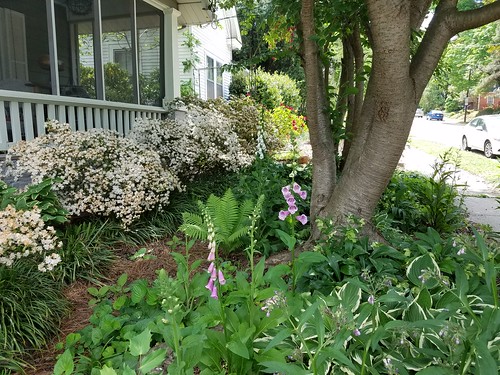 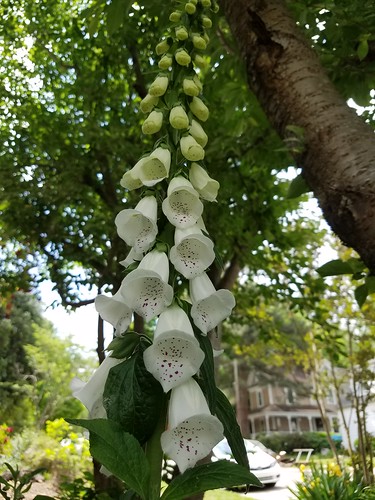 When I planted the foxglove seedlings, I said that I hoped they would be purple. And I did get some purple ones. The one that is truly stunning is white, though. 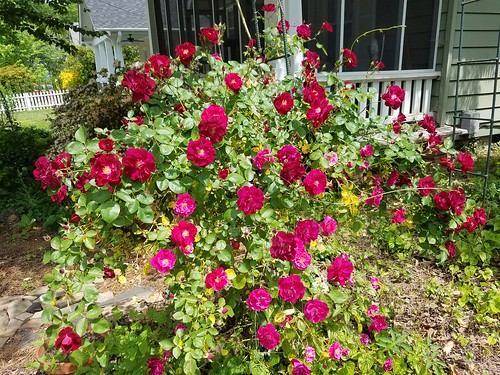 This rose is on the other side of the property line, but last year it nearly died from being choked with vines. I pruned it and cleared out the vines, and this is my reward. It climbs up into my cherry tree too. 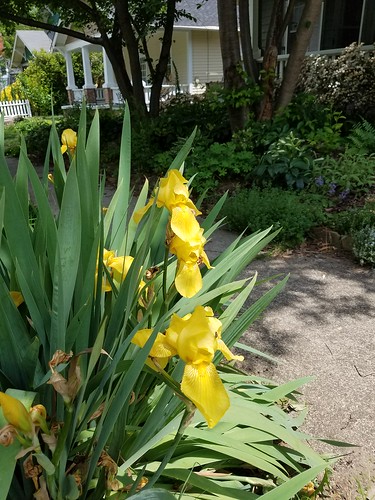 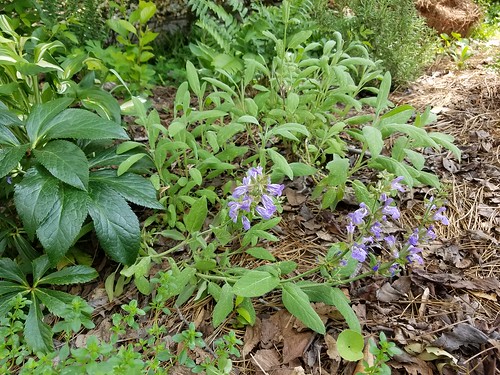 I’m amazed that this sage is so happy here. That’s one reason I am developing this side this year. 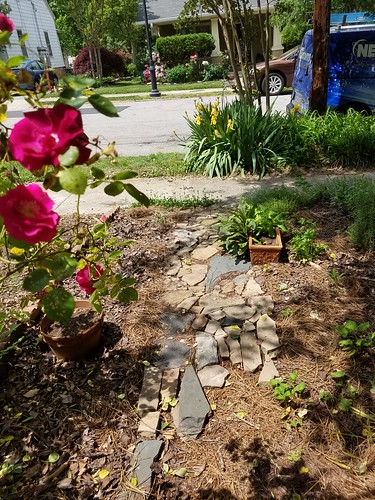 Welp, I’m pretty whipped with all this gardening, but I’m happy. I’m seeing a new chiropractor twice a week and I’m going to the Tapestry Weavers South retreat in a couple of weeks. I got into the workshop at John C. Campbell Folk School that I was on the wait list for a week later, but by that time I had paid and committed to the TWS retreat. I was going to run up the credit card and go anyway, but then I found out that the reason a seat opened for me was because the friend I wanted to take the class with had canceled. I was really disappointed at first but after I thought about it, it was just too much to do in one month, too much time in a car (it is painful for me to sit for long and the trips will take 5-6 hours each) and too much money to spend. So be it. They were kind enough to give me my deposit back.

AND, because I didn’t think I’d get into the JCCFS class, I also signed up for another weekend workshop at Topsail Beach in June, so there’s that to look forward to (and pay for) so it was for the best.

During all this, I have been experimenting a little with natural dyeing and taking India Flint’s Alchemist’s Apron online class. I’m going to re-dye my apron to try to get it darker, and I’m going to start over with the videos now that I have time not to half-ass it. Dyeing the silk threads has been really fun. 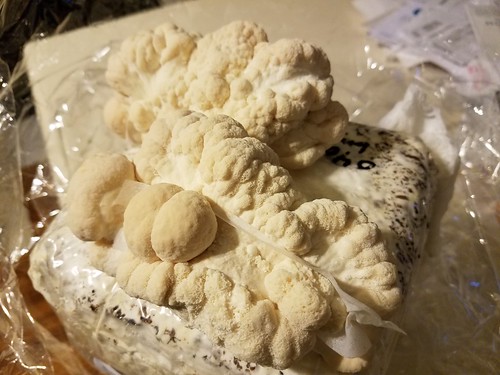 BYE, time for a nap.