I’m sure that most people in the world would rather be doing something else full-time than what they do to earn a paycheck. I am grateful for and appreciate my job very much, not in the least part because I have had some really shitty jobs in the past and worked with some awful people, and my job is wonderful compared to them. I know what a good thing is because I’ve experienced the bad. But I’m going through a period when I ache to be in this studio, weaving or stitching. I alternate between being fearful and anticipatory about my retirement, which, if I’m lucky, is ten years away. I want to leave this country, this state, this city, and then I think that I could be happy here for the rest of my life if I could only ignore politics.

Greensboro is a great small city, really. It’s just that I haven’t lived anywhere else but here and Marietta.

Okay, so this week was very stressful and it wasn’t supposed to be. By the end it all calmed down but only because we all needed to make mind adjustments. Everybody’s stress was rubbing off on everybody else and once we all saw it, we could acknowledge it and work on it. I’m not going to talk any more about work here but I need the artwork more than ever. Stitching on this boro fabric is particularly good for lowering the blood pressure: 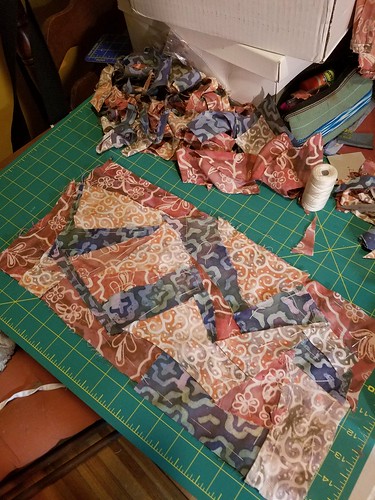 Midweek, I stopped on my walk to work to look around when my crow friends were behaving oddly. Sure enough, there was the red-tailed hawk in the tree nearby. The crows were flying around him. 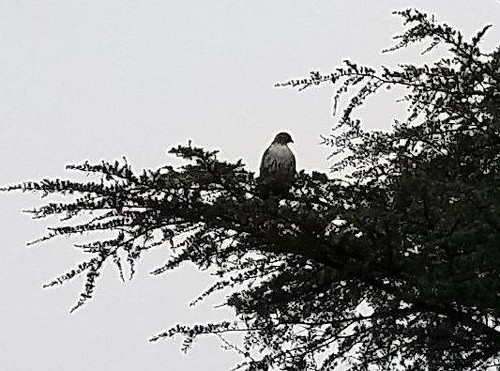 He flew away to the top of the art building, when I noticed his mate was perched nearby. She joined him, and the crows continued to hassle him. I was excited because I had not seen the female before. The male flew away and the crows followed, then he returned and everything seemed peaceful. I put my camera away. Then he hopped on the female and mated! I got to see two hawks getting it on! No photo, it was over quickly when the crows came back to annoy them. 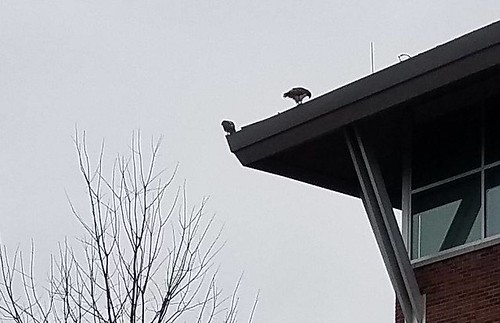 I tried to capture the hawk in my tapestry diary this week. I am a bit frustrated with the limits that I set for this project sometimes, although I think that they are good ones. Using just the cotton and linen thrums on an 8 epi warp and a daily format across the frame for each week is starting to feel a bit oppressive. I think that it is a good exercise, but if it was a closer warp and I used wool, I could weave some beautiful images. This is a bit like weaving emojis from the 90s. However, this is not supposed to be a work of art, it is supposed to keep me weaving on a regular basis, try out a few ideas, and use up these thrums that would otherwise be used for ties or take up space or be thrown in the garbage or compost pile. 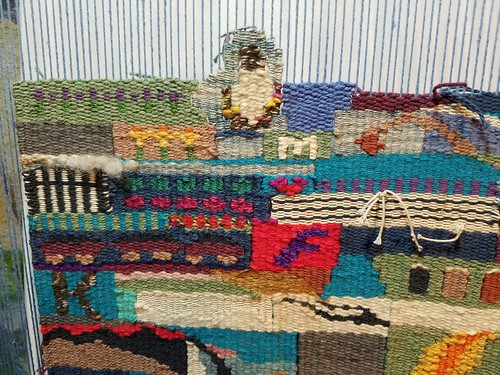 One way for me to get through this busy time of the semester at work is to consider all the lovely plans ahead of me. I will be taking online classes from both Jude Hill and India Flint. In May, I’m going to the Tapestry Weavers South retreat on St. Simons Island in Georgia. That’s an area where I’ve never been. It is possible but doubtful that I’ll go to Tommye Scanlin’s tapestry class at John C. Campbell Folk School the week of Memorial Day. The last I checked I was third on the wait list. Susanne and I are going to Leslie Marsh’s Chinese thread book workshop at Topsail Beach one weekend in mid-June. Mid-July, we are spending a week at Lake Waccamaw and my cousin and aunt from Colorado are coming to join us. Then in September, the plan is to take a week to see Yellowstone and Grand Teton National Parks. That’s what the tax return will go to, most likely.

Really, I have such a good life.

Lenten roses are loving the front yard, and the grape hyacinths that I transplanted last year are beginning to peep up. I’ll plant some peas today before the rain begins again. 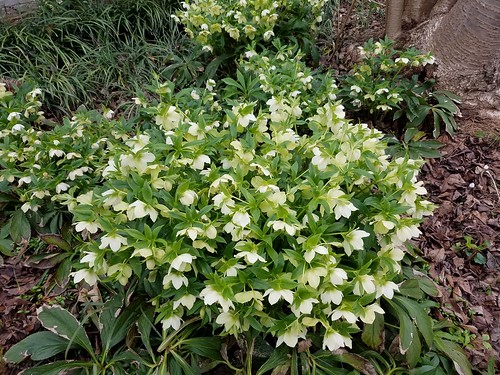