Have you seen this new phrase? I like it. Rebel stitching. Not following the rules. It is what brought joy back to my interest in sewing. I’ve been fascinated with sewing all my life. My mother was an excellent seamstress and sewed a lot of my clothes until I reached the age of balking at wearing home-sewn. You know how teenagers are. I appreciated it later in my 20s, but by then I had given up on learning to sew properly. By that time, other than sewing me a dress and my niece’s bridesmaid dress, she turned to quilting.

I inherited a huge amount of fabric from her. Much of it I gave to an art project at Greensboro College and to Reconsidered Goods, but I have a lot stashed away that I can’t bear to part with yet.

I was a theater major my first go-round in college. By my senior year I knew that I didn’t want to be a high school drama teacher. My advisor told me that I was too opinionated to teach high school and should shoot for community college! Seriously! Ha, it was like listening to my mother. “So OPINIONATED!!!” What a word. But I am, and that’s fine.

I realized that it was insane to continue in the education program, and although I might have been a good director, I hated dealing with the egos of my fellow acting students, and I had no chance at all to be an actor or the skills to be a techie. So I set my sights on simply getting that diploma and working in the costume shop.

We had sewing lessons in costume shop and it was graded for credit. Soon I was relegated to the simplest tasks for the shows, such as simple hems and ironing muslin. Boy, did I iron a lot of muslin. I have always hated ironing. I worked backstage with the costume changes and the laundry. But I loved the costume shop supervisor, Ella, who was gentle and kind.

I loved gleaning the scraps from the trashcans and stitching them together by hand at home. There were so many different textures and brilliant colors. I sewed them together in patchwork squares, not paying much attention to whether they “went together” or were of the same weight or stretchiness. It was a kind of therapy for me, I guess. Many years later I dug those squares out and they were quite hideous! Most of them ended up going inside and cut up on the top of my Magic Cloth piece, “The Flag of Me”, that I did in one of Jude Hill’s classes. Funny that I can’t find a photo of the finished flag. I’ll do that soon.

Near the end of my last semester, the costume designer professor handed me a bolt of fabric and told me to cut it into three-foot lengths. I thought this was odd and asked her to repeat herself, and she did. She left, and I cut the entire bolt into three-foot lengths. She came back and had a meltdown in the middle of the room full of my classmates. “I said three-yard lengths! How could you be so stupid!” and out she stormed. I gathered my things and slithered out the door, and did not return until after the final test when I caught Ella alone in the costume shop. She treated me with warm sympathy, allowed me to take the written test, and passed me with an A. God, I love her still. I’m sure that she has passed from this world by now and if there is a heaven she is there.

Anyway, that “How could you be so stupid!” rang in my ears for decades. It still does when I see this professor on campus.

But I don’t feel stupid about sewing any more. I revel in it. If I mess up, I might get a little frustrated, but that is toward the sewing machine, not myself. I love to hand stitch whenever I am able to do it.

Who broke me out of that mind-fuck? It was Jude Hill. And a little later, India Flint, who I am doing the Bagstories online group with, and the next project, which is to sew a piece of boro fabric with the little pieces left over from my Wanderbeutel bag. Really, I cannot express enough how much joy these two teachers released when they gave me permission to follow my instincts with stitch. I saw that I was the one that had denied myself this “permission” all these years, and now I am free.

It spilled over into my tapestry work, too. Here’s the end of the tapestry diary for the week. 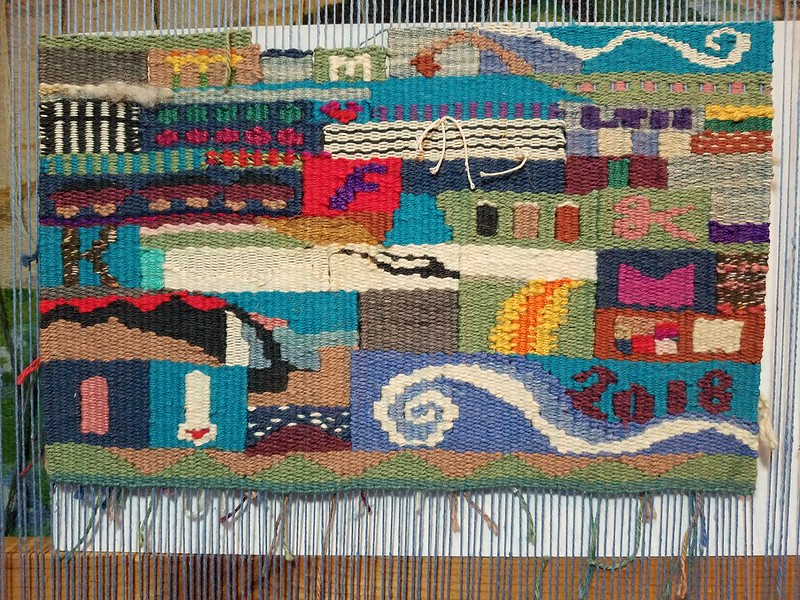 I like using things that would be thrown away. That’s why I chose the leftover cotton and linen thrums to weave this diary. Next year, I’ll probably use wool.

Leave a Reply to Ken and Terri Bryson Cancel reply