I don’t have a lot of photos or news to share this week. It has been windy and rainy and I had a lot to do at work, so I mainly came home at night and vegged out on the sofa. I did weave a little on the tapestry diary each night though. 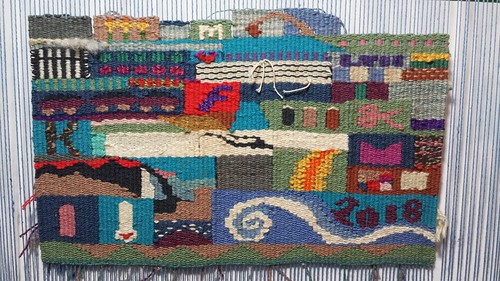 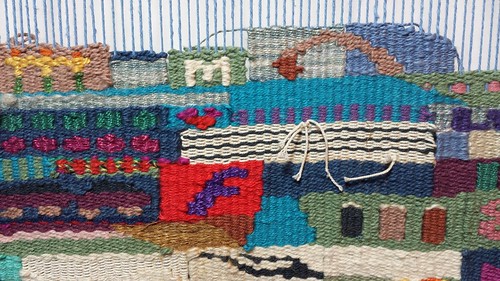 The plan was to weave March coming in like a lion because of the bombogenesis (I have to use that word whenever I get the chance) but the weather also brought cluster headaches on Thursday night and I realized as I began weaving that I might not be able to weave a whole lion before the weekend was over. So I wove the tail. Now I’m trying to figure out how to interpret the wind again.

It’s a good thing that we never got around to putting up the greenhouse last weekend since the wind has pretty much knocked over most things not attached to the ground, but now I wonder if there is any point at all in doing it. It’s getting a bit late to start tomatoes and peppers, but I might try starting them inside and see if the cats cooperate. I planted some lettuce seed in a container last Sunday.

I had to go ahead and dig up what few perennials I wanted to keep from the studio house on Wharton St. late on Tuesday afternoon, since the house suddenly sold. It was twilight and hard to see but I think that I got all the pineberries, a couple of raspberry canes, and several asparagus roots, although Susanne says that she has not seen any green life come from them yet. I’ll pop them in a big planter and see. I don’t have a bed dug or prepared for them yet and won’t be able to do it since both arms are begging mercy, as well as a knee. I have no idea where I’ll put the raspberries. All of these are still in the plastic pots that I carried them home in on Tuesday, and will have to survive there for another few days.

Anyway, the bloodroot is flowering in the front yard garden and that makes me happy. It likes it up there and has spread. Daffodils are blooming and it will only be a short time before my favorite little blue flowers come out to play.

Continuing with my breakage of the rule not to buy anything unnecessary…I bought Sandy a smartphone this week. It was time. Actually the phone was free but I added him to my account. It will be about $20 more per week, but if it will help him stay on the treadmill at the Y longer by letting him listen to audiobooks, I think it will be worth it just for that. He needs to learn how to use a smartphone – for chrissake, he’s a help desk techie! The trick will be for him to keep it charged and not to lose it. Given that I lose mine about once a week, I’m no one to talk. I would like for him to have a phone with him because we are both getting older and the world is a chaotic place and I’d like that security of being able to call each other or 911. So it is not that unnecessary.

I finished “Straight Man” by Richard Russo this week. A hilarious read, especially for those of us who work in academic liberal arts departments.

Craftsy is having a free all you can watch weekend, so I’m going back to watching the Natalie Chanin classes. These are at just the level of instruction that I need and it is all hand stitching on cotton jersey, which I have a lot of! It’s a good way to sample some classes that I might want to buy later, so I am wrapping this up. If you see this in time, you may want to check it out.