First, the tapestry diary for the week. The knots are showing on purpose, by the way. We had some problems to figure out this week at work. Fortunately, they were resolved and next week’s path forward should be clearer.

I wove a little bit on Cathedral, but my main focus was stitching this Japanese tsunobukuro style bag along with many others all over the “whirled” (India Flint’s phrase) in India’s Bagstories Facebook group. She set it up as a companion online group for those who bought any form of her wee booklet “Bagstories” on Blurb. I bought the PDF, since I am not buying stuff that takes up space in the house this year, unless necessary. Like a new vacuum cleaner.

Anyway, I’ve been obsessed with stitching this bag. I love hand sewing but I have to give it up frequently due to chronic tendinitis problems. Right now I’m on a roll. 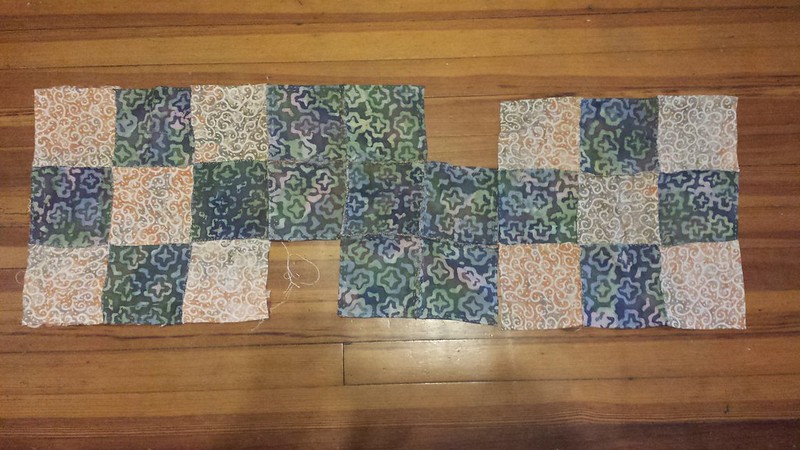 This fabric is upcycled from two favorite pairs of pants I wore back in the late 80s/early 90s. They are special to me because they were the first “arty” kind of clothes I ever bought, and when I wore them, I felt beautiful and fabulous. They were my go-to clothes for art openings until I quit smoking and gained a lot of weight. They felt like friends, so I could never get rid of them.

I redesigned it after I began because the brown and gray/orange rayon batik fabric was a little too stretchy so I decided to line it with the brown fabric.

I can’t wait to get this bag put together and use it, and start on the one that is actually in India’s booklet.

This is the closest that India has come to doing an online class, and normally I am enthusiastic about an online or video class for two weeks, then I abandon it. However, I love this group intensely, and I’m glad that she cut off enrollment at a manageable size. It is still over 200 people but most people don’t post. So many times I join a group and unfollow because the number of posts become overwhelming as it gets popular.

India seems to be enjoying this immensely so it may be something that she continues. Personally, I don’t see how many of these artists maintain online classes and social media and get so much wonderful work done. I fall down rabbit holes way too quickly on the Internet.

As far as the vow to not buy stuff this year, I’ve broken it twice so far. At the Women’s March in Raleigh I bought this pin from a street vendor. I mean, seriously, how could I not? I’m not made of stone. 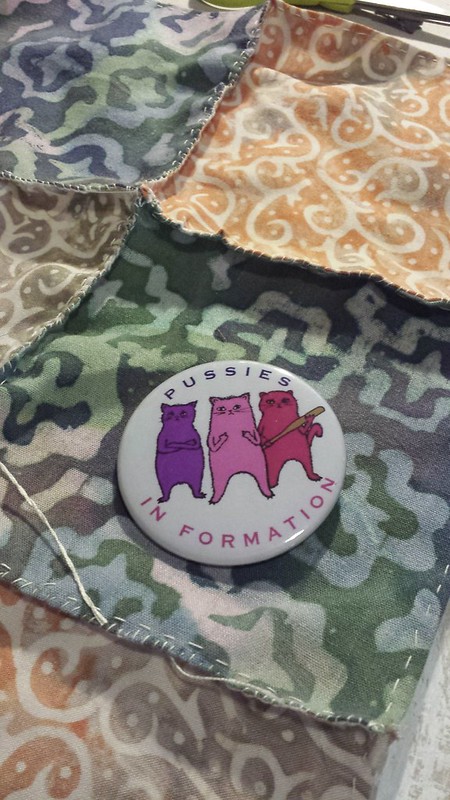 The other item was this 4 bottle set of chalk paints from the shop that hosted Seth Apter’s workshop this week. I always feel like I should buy something to support the venue, and I’ve wanted to try chalk acrylics. 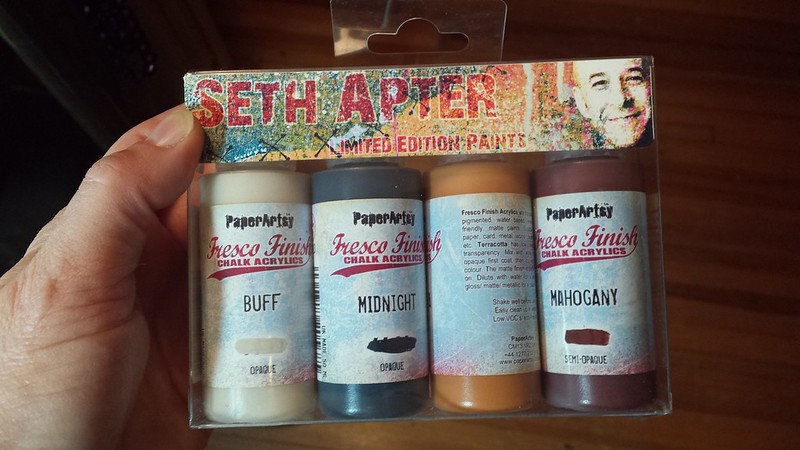 Yesterday we drove around disposing of several boxes I had filled with purged stuff from the studio. It was not nearly enough. A box of books went to the used bookstore for credit. I came very close to getting a couple of book arts books that I had not seen before, but I remembered the point is not spending money…the point is making space. A box and a bag went to Reconsidered Goods. A box of denim jeans that were too good to cut up went to the Salvation Army. Normally I avoid the Salvation Army because of their anti-gay stance, but the Interactive Resource Center doesn’t accept clothing donations and they told me that they give vouchers to homeless people for clothing at the Salvation Army store.

Some of the paper ephemera went into the recycling can and into the kindling box. I mean, honestly, why do I save every little piece of paper?

Now I need to fill up 3-4 more boxes this week.