A lot of articles and posts came out in the past few years about people who have decided to drastically cut spending for a year. Pledges have run the gamut of the obsessive compulsive buy absolutely nothing, create no waste, grow all food and barter plans to more moderate plans to cut down and purge. And then, of course, there are those whose poverty leaves them no choice.

I became an advocate of voluntary simplicity in the late 80s, when I really couldn’t afford much extra anyway. For several years I wove on frame looms (still do) with rags and bought the cheapest yarn I could find at yarn outlets. I crocheted a lot. I worked at a bookstore that carried a lot of remainders and I was able buy samples from book buyers very cheaply and so book buying was my biggest addiction. When I came into a small inheritance from my aunt I spent it on a Harrisville floor loom kit, which I got at a wholesale price from a friend who had a weaving supply store.

We didn’t travel much or far. Both of us had low-wage jobs that gave little vacation time and no sick time at all. We would toss a tent and the dog in the back of our little pick-up truck on the rare weekend we had off at the same time, decided what direction to head, and went that way. We went to Lake Waccamaw a lot because it was free.

My life has accumulated a lot of stuff since those days, as we both got better, more stable jobs, a small house, and we absorbed the belongings of our parents that we couldn’t bear to part with. The book addiction is deeply rooted in both of us. I LOVE COLLECTING BOOKS of ALL kinds. Novels, art books, old musty books with Art Nouveau covers, dictionaries, encyclopedias, nature books, old textbooks, secretarial manuals…it’s bad in my house. The hoarding is bad. Bad, even though I regularly purge these books boxes at a time. At one time I justified it as wanting to open a used book store one day. I sold books on Amazon for a few years. Now I justify the hoarding as supplies for my book/mixed media/collage creations.

So this year, no purchasing of books or art supplies or knick-knacks that we do not need. I like the way David, the author of Go Deeper, Not Wider, approaches this idea. It puts a positive spin on using what we already have to enrich our lives. I’m not going without, I’m going deeper.

It’s already hard for me. I see a recommendation for a magazine, or a particular kind of scissors, and I look it up online. I know that if I buy an e-book or digital issue of a magazine it will most likely be forgotten without reading it. That has been proven. Online classes are bought and abandoned halfway through or sooner than that.

However, I mentioned that I bought the Blurb PDF of India Flint’s “Bagstories” and I have joined the private Facebook group where she is going to guide the buyers of her wee book in a project. This, so far, has already been worth the price for the connections I’ve made to other North Carolina artists on the Facebook group! This fabric may be a tad too stretchy for the bag projects, but I finally sacrificed my batik pants from the late 80s/early 90s that I loved so much and started cutting them up to reinvent them for a new use. I’ve almost finished measuring the warp for that rag rug project I began several years ago. 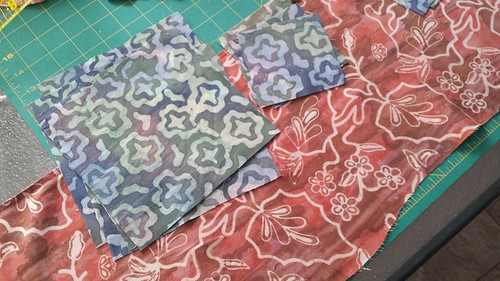