I’m finding myself walking around the house talking to myself and Pablocito (he does talk back, at least) so I guess it’s time to write a blog post.

The overriding theme of the tapestry diary will be weather. It’s obvious to me now. It can be external or internal weather, but climate and weather has always been fascinating to me. It probably comes from being a farmer’s daughter.

My father didn’t make his girls work on the farm like most of my friends had to, so by God we better be able to tell him the weather report from TV when he got home. This was pre-cable, pre-Internet, pre-satellite dish, and the weather came on two TV stations at 6 p.m. when he was probably still on a tractor. He had a full-time job managing a little air filter factory in our community for several years while we were growing up, and a TV repair shop before that, when people still had things repaired instead of dumping them and buying new. He also had a marina near Calabash that serviced shrimp and fishing boats. Anyway, he was a busy man.

Our job was to help grow and pick and preserve and freeze vegetables for the year. Daddy mostly grew tobacco, but he planted a lot of Silver Queen corn because we ate it every day throughout the year. The shock I felt when I first ate corn out of a can after I left home was a real eye-opener as how good our family had it when it came to homegrown food. Daddy also grew several varieties of blueberries as a hobby, so many that our family’s friends came to pick for themselves, we started a pick-your-own side business, and I picked them to pack and sell for my own money. They had a long growing season because they didn’t get ripe all at once. My favorite ones were Tifblues and I had to climb a stepladder to pick the biggest ones, sometimes as big as a quarter.

Well, I didn’t intend to write about that, but that’s what these coffee pot posts are for – writing whatever pops out. I dreamed about my parents last night. In one dream I was waiting for my mother to pick me up and I was very worried about her. Where was she? Did she know where I was?

And Theo came back to me in my dream, poor Theo, covered in fleas, looking at me with the “pity me” Puss-in-Boots expression that he had. So I am definitely going to PetSmart and buying Frontline for Diego and Pablocito and applying it today. The flea comb and diatomaceous earth has kept them down but it hasn’t been enough.

Now, for what I was putting off writing about: I had a meltdown this week. I always need to write about this when it happens because one of the main missions for this blog is to write about my experience with depression, anxiety, panic disorder, and agoraphobia, and my recovery. I don’t always do it because, well, it’s not easy.

For the most part, I have recovered well. I seldom have a panic attack any more. This one and the last one I had on Thanksgiving weekend were different. There was no chest pain. It was more that I was completely overwhelmed and couldn’t move forward. The other difference was they both lasted longer than usual. So maybe they could be classified as intense anxiety attacks.

Over the long term, I seem to need a lot more solitude and quiet than I used to. It is fortunate that my office has been moved to a quieter place where I feel like I can shut the door without seeming rude. That was due to my supervisor being a really great manager and seeking a solution to reduce stress for the staff. However, I still crave it.

It’s not that I don’t ever want the company of others. The parties that I went to this past weekend, and the New Year’s Eve steampunk ball were great. Sometimes I really need to go out to a bar and have beers with friends. But anxiety started creeping up on me last Sunday afternoon. At first I thought I was pre-migraine, because I was getting some visual weirdness, and that may have been so. At any rate, Sandy and I left a lovely party early and I sort of went downhill from there, holing up under the bed covers and dreading work the next morning. Feeling like I can’t possibly submit this book to the Triangle Book Arts show as is, but not being able to make myself work on it.

The next two days I made it to work, which was intensely busy with the first day of classes and a TA who left the program over the weekend that we had to find a replacement for. That worked out well, and it was probably for the best that the TA in question left, but it was last minute. And the next day, another replacement for a last-minute departure from our faculty just before Christmas, informed me that she hadn’t done the Homeland Security required paperwork, and didn’t seem to have thoroughly read my emails about what she had to do before her first day at work. That, with all the stuff that I need to get done in the next two weeks, with the anxiety over Sandy’s skin biopsy, sent me right over the edge. I didn’t have my Xanax with me. I put a sign on my door, locked it, and curled up under my desk with my back pillow and a coat over me, crying and telling myself to get over it.

Two hours later I was up and recovering. I apologized for overreacting on email about the “crisis” (it got resolved that day), and I left early to get an scheduled estimate on replacing our aging water heater. After that I got in bed, pulled the covers over my head, and slept on and off until about 10 a.m. the next day. When I got up, I felt so relieved, like all this pressure had built up for days and a dam had burst. I went back to work and did what I needed to do.

So I wove this for my tapestry that night. The pink shape is my little boat going over the dam. I’m pleased with this because I really did come up with it as I started to weave, searching for the image that could represent my distress and relief in tapestry. 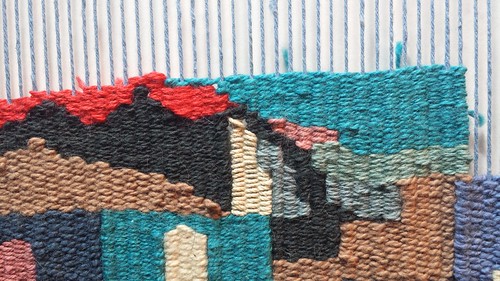 Anyway, I have a three-day weekend ahead of me and I am continuing my diary in the theme of weather, but I am going to make sure that I spend much more time weaving on Cathedral. As for the book, I’m sending it “as is.” I’m going to cook if I feel like it, but other than getting a little cleaning done in the yard and around the house, not much housework. If I can clear out some more space in my home studio, I’m going to bring home another carload of stuff from the studio at my friend’s place that I am moving out of, since she is house-shopping and doesn’t plan to rent it much longer. I’ve planted some perennials in the back yard there so I’ll take some buckets and dig those up before she leaves. Mostly pineberries and asparagus, and I hope that the roots of the blueberry bush I transferred over there might have some life left in them, so I’ll dig them up too. Where I’ll plant them here, who knows? Gotta figure that out before I transplant the asparagus, but the others can stay in pots until spring.

By the way, Sandy couldn’t tell me what kind of skin cancer he has, but it is not melanoma and I think it is squamous cell from what he told me. This is why I need to go with him to doctor appointments. He doesn’t remember the details. He’s having it removed under local anesthesia in the doctor’s office in a couple of weeks. I’m glad he had it checked by a dermatologist. His doctor gave him some cream to put on it.

Okay, time for another cup of coffee and a shower, then I need to get on with my weekend.