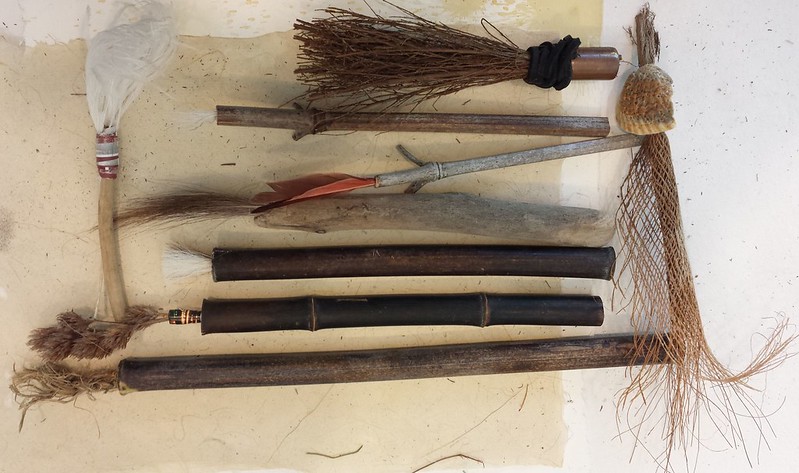 I had a good weekend. On Saturday morning I drove to Chapel Hill and played with the Triangle Book Arts group. We spent the first few hours making brushes with bamboo and driftwood and deer tail and horsehair and feathers and various plant materials, then the last two we spent making marks with things such as small pieces of wood and bleach on black paper, and using salt on wet pigments and spraying through made stencils and such. When I got home Sandy and I went to the Deep Roots Grand Reopening. A fun day.

It seems to be a good time for fungi, even though we haven’t had any rain since we got back from Colorado. The temps are still in the mid-high 80s and it’s muggy. You’d think that we would have gotten some of this hurricane action on the edges, but no.

The Sierra Club sponsored a short hike on the West House Trail and I made myself get out in nature. A good group and a nice walk in the woods. I took a few more fungi shots. The hands are not mine – my nails have never looked that good! 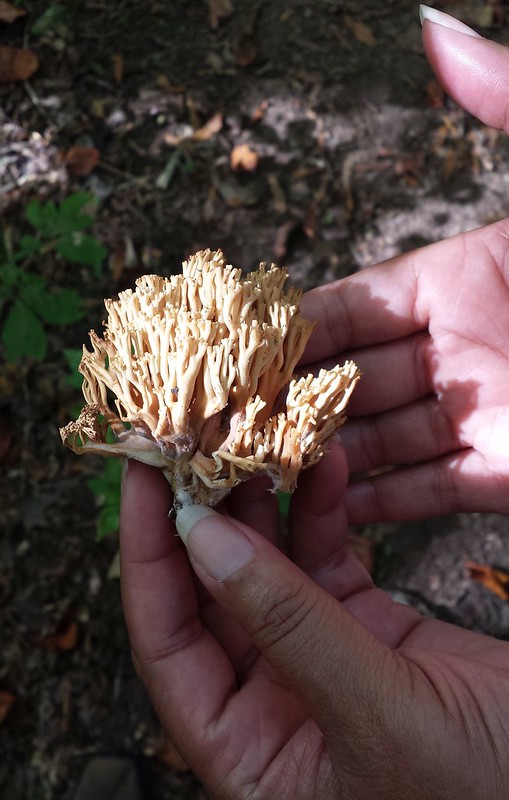 On Sunday I was a domestic goddess and my house still looks terrible but it looks less terrible, and sometimes you just have to go with what you got. I am told all the time that my house looks “lived in” which is meant well and I take it as a compliment. People don’t worry about putting their feet on the furniture at my house. I’m always more at ease in a friend’s messy house.

The main focus was dealing with the fleas again before they reproduced a lot so I did a lot of washing bed linens and the rugs in my bedroom. The diatomaceous earth did work well on the carpets and I’ll continue to use it, but I think that I’m going to have a problem with fleas as long as the boys hang out on the front porch. Putting the d.e. on Pablocito was an experiment and it did help a lot for a couple of weeks. Diego got the dose of CatMD during the same time, which is a cheaper version of Advantage. When the fleas came back on Pablocito, I decided to dose him with the CatMD stuff too, and boy, was it strong. My poor boy blinked his eyes rapidly and squinted all night from the fumes and my throat tightened up and got sore just from being in the same room with him. We were both fine the next day but it makes me hesitant about these other five doses. They were still expensive. Maybe I’ll try the pill route.

Dried more peaches and tomatoes in the dehydrator too. I joined a dehydrator group on Facebook and now my head is swimming with other ideas.