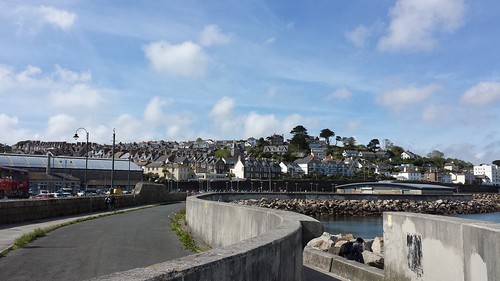 ^^^Looking back at our hotel in Penzance from the waterfront.

Our wonderful hosts, Judy and Jeremy, made us a full English breakfast on Monday morning. We sat over coffee and chatted for about as long as we could. It was interesting to hear their perspectives on Brexit and politics. One observation that Judy made about us that I was pleased to hear was that we have a very British sense of humor. I guess all the Monty Python and BBC shows have rubbed off! If we lived closer, I feel like we would be good friends.

This was a travel day, and a weird one. In hindsight, we should have returned the rental car while we were close to Exeter, because neither of us had any business driving on English roads. We didn’t understand the road signs. The roundabouts freaked Sandy out, and he drove over a curb and almost into a tree when another car cut him off in a roundabout. The narrow back roads, which often narrowed without warning to only one car width, had no shoulders and hedges and stone walls were only a few inches from the side of the roads.

But the really embarrassing moment for me was when I scraped a curb on a comfortable wide motorway. There was no excuse for it, and I still think that curb must have jumped out from the side of the road. Anyway, I paid an extra 100 quid for that mistake. I’m just glad that they didn’t charge me for the whole rim. My other punishment by Sandy:

We stopped at Jamaica Inn on Bodmin Moor, which was just off the main highway. A real tourist place, but fun enough, with good food and a farm stand. We had some caffeine and pastries and I bought a copy of Daphne du Maurier’s book Jamaica Inn, which I’m reading now.

When we arrived at our hotel in Penzance, I was pleased at the location right on the bay overlooking St. Michael’s Mount. We walked into the lobby, once we could get someone to open the door, and the mess and the stench was awful. I was ready to bolt by the time the owner walked in, but to be polite we looked at our room upstairs, which was tolerable, only a little musty and it was clean. He said that a mistake had been made and that they were in the middle of renovation downstairs, and offered to let us stay that night for free. He said that he would put us down as a no show on the travel service website we used but we’d have to back him up by saying that we didn’t stay there. So that’s what we did. I guess that the benefit to him was that we wouldn’t put up an awful review. We propped open the windows for fresh air and walked into town.

We had drinks at a little pub called the Globe, where the patrons and bartender recommended the Light of Bengal for dinner – again, one of the best meals we had in England was Indian.