It poured rain on Wednesday. We ate breakfast with a young Australian couple who lived in the Outback. They said that it cost more for them to travel to a city with an airport in Australia than the plane ticket from there to the UK cost. And I thought that I grew up in the sticks.

On the way to the British Museum, we stopped in a beautiful old art supply store where I replenished my supply of Pitt pens. It carried lots of pigments, and there were hand marbled papers in the window.

^^^First we saw the Rosetta Stone, which had such a crowd around it that I was afraid that I’d have a panic attack. Fortunately, the crowd thinned considerably as we moved away from it.

^^^I especially liked this frieze panel with Amazon warriors in battle.

^^^Back to the British Isles

There was a bog man, and mummies. Lots of mummies. It was crowded. We had a bite to eat in one of the museum cafes, hit the gift shop and left.

Sandy wanted to go to the Imperial War Museum, so we got on the Tube and crossed the Thames. It was a nice walk, not so wet by that time. Sandy looked at the exhibits but I went straight to the museum cafe and caught up on my email, Facebook, etc. since I could get wifi there.

We took a break at the hotel, then went back downtown to Piccadilly Circus and just walked around in the rain. Most of the stores were closed. We found ourselves in the theater district, around Soho and Covent Garden, then walked back along the Strand to Charing Cross Station.

^^^One gallery had a couple of paintings by Bob Dylan in the window. I took this photo especially for Susanne.

We stopped for pints of delicious Whitstable Bay Black Oyster Stout at Mr. Fogg’s Tavern, sat in the window and watched the rainy street scene across from the Noel Coward Theater. 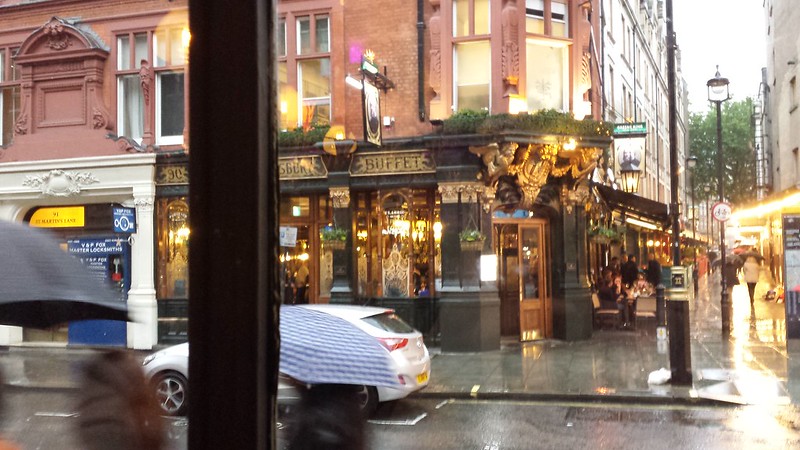 We went back to West Hampstead to eat dinner at Toomai. Very good Thai food.

I was so surprised that I didn’t see any antique bookstores. Turns out that there was a little street with several of them right around the corner from the pub where we stopped when I looked at Google maps while writing this post. Oh well, I didn’t need the temptation to load anything else in my baggage. Another place for me to go back to one day.