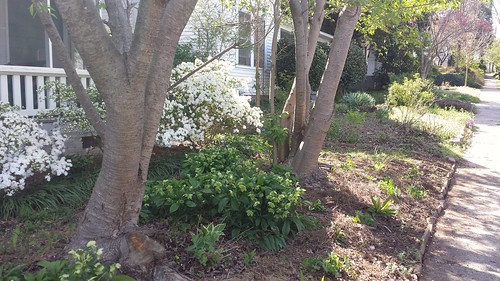 Whew. I am SO SORE from carrying bags of potting soil and the yard work I did yesterday. It is disheartening because it doesn’t seem like I did that much, but I guess that’s what laying around all winter will do for you.

My focus has been the front yard, although I did plant sugar snap peas, Oregon giant snow peas, Nantes carrots, and arugula in the back forty. Now that I get a little more sun on the south side of the front yard, I’m going to take advantage of it before the neighbs let their yard grow into a jungle again. I do miss their butterfly bush, though. 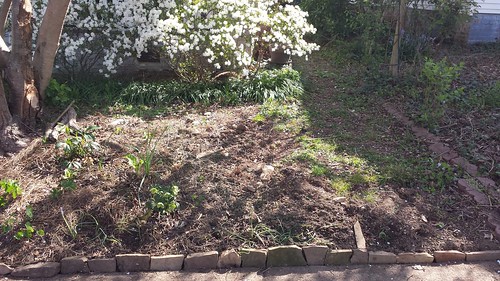 Moving herbs to the south side because they are being taken over by Lenten roses. I also moved some flower bulbs (don’t know the name, will find out) and weeded a lot of the hated liriope and wild onions and ivy and other invaders. One day if I am not broke from traveling and house remodeling I’m going to hire somebody to dig out all the liriope and English ivy. The last person I asked for an estimate for cleaning out the English ivy and other vines in the back forty was the guy I hired to cut the little bit of grass and weeds we had back when neither Sandy or I could do it. He looked at it in horror, backed away without giving me a price, and I never saw him again.

I’m going to plant yarrow in the pathway since it doesn’t mind being walked on. The edge is made with fieldstone that I dug out of the beds in the Back Forty years ago. There was once a big dirt-covered mound back there that contained all kinds of crazy junk, but digging for the fieldstone was like digging for treasure. 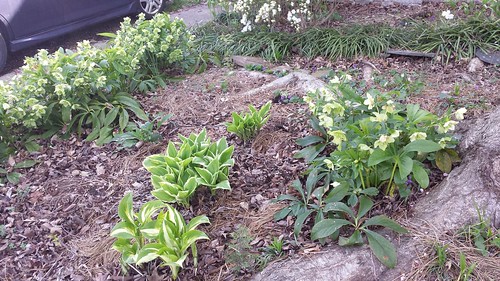 Anyway, I have hopes that my front yard might produce a few vegetables this year. I’m going to plant some in containers on the south side. The yoshina cherry trees have such big shallow roots that it is difficult to plant anything that needs a big hole. One huge root is heading for our house and I guess we need to cut it with a chain saw. I regret planting these trees in 2002. 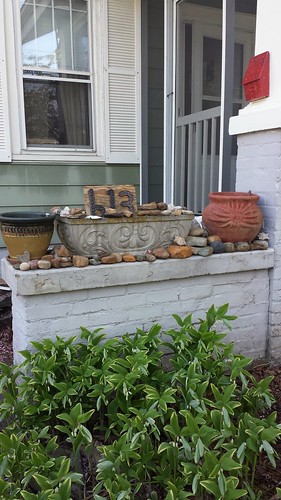 I want to get more bright colors in there, but the shadiness lends itself better to Lenten roses and hostas. I’ll plant some foxgloves and more purply foliage such as coral bells. The bloodroot I transplanted last year really took off and that was very pleasing. The Solomon’s seal is probably my favorite plant and has expanded a lot since I planted it near where the gutter empties rain from the roof several years ago.

I planted lettuce and parsley in the containers on the (what do you call that) wall next to the front steps. There has to be a architectural name for that. My brain doesn’t do words the way it used to. 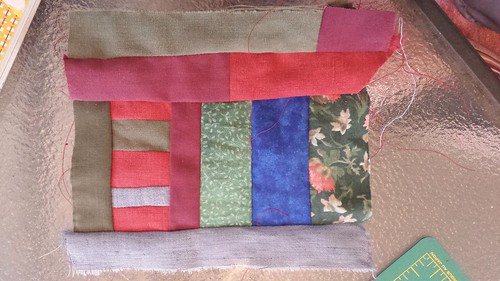 In the studio: not much. A little random sewing of scraps. I’m going back home today and weave on my tapestry on the front porch. The cats are loving it. Sandy moved Pablocito’s cat tree out there. We both spend hours reading together. This screened porch is a good addition to our lives. 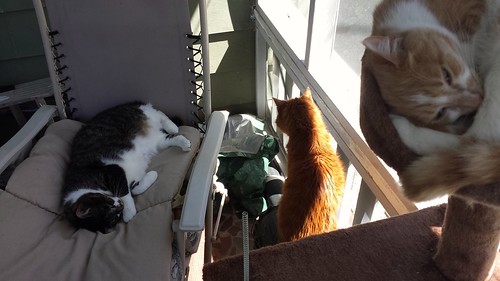 So, it’s been a pretty good week, other than a sore neck and back. My chiropractor closed his practice to teach at Duke. That’s how good he is. He treated me for twenty years. It is hard to make myself find another chiropractor but I probably need to do this for my neck before I go to the United Kingdom. It sucks not to be able to turn your neck when you’re being a tourist! But work has been satisfying and I’ve probably partied a bit too much with friends. I need to cut down on my beer drinking because I’m gaining weight again.

In books, I am totally hooked on the Poldark series by Winston Graham. I am way ahead of the TV show – at the end of the sixth book and ready to order the next three. Cornwall awaits!