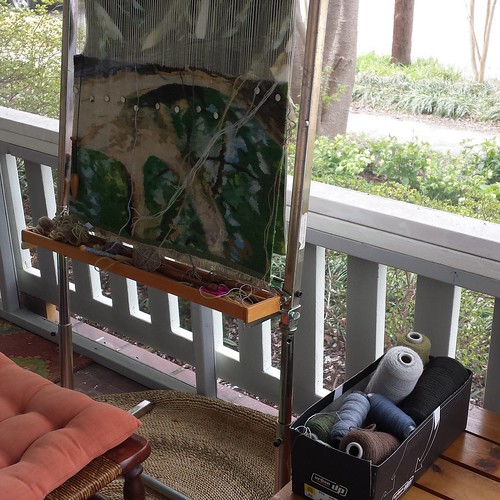 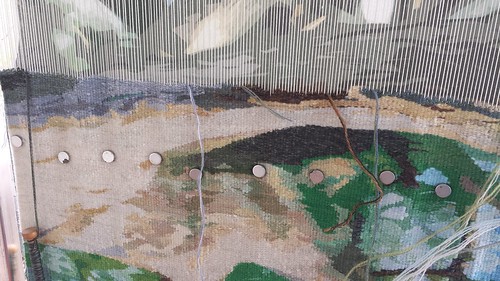 Tapestry weaving on the front porch yesterday. I actually got a bit farther than this. When I go back home this afternoon, I hope to finish the blue grey part, but that also depends on working the dark part, and that might build on top of the right side, so that’s how it goes!

Sandy and I cleaned out the shed in the back and filled our city garbage and recycling bins. Most of my tobacco sticks that I used for trellising beans and peas have gotten rotten, so we’ll burn them in the fire pit. Disappointing, but it’s my own fault for being sloppy and lazy. We removed a lot of English ivy and wisteria vines, but as to be expected after a couple of years of neglect, there is much more to be done. 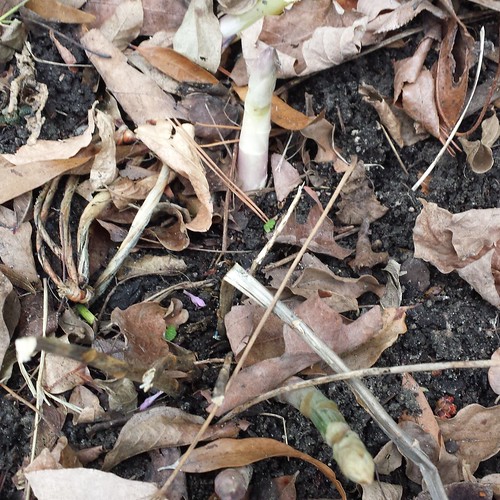 I planted peas and carrots over here at the Wharton St. studio. Susanne prepared this bed last year, and it had some of the biggest longest earthworms I’ve ever seen! In the process of weeding it out, we discovered some healthy asparagus. We are going to add to this once the peas are done.

Theo is growing more frail and losing weight. He will only eat very little. The only thing he wants to eat is Greenies Hairball Control treats. So I’ve given him six on top of his canned food twice a day, but this is confusing him and he doesn’t find all of them. I give him 1/4 of a loratidine a day for his allergies, but I think that his sense of smell is gone. Of course it is all speculation. I don’t want to put him through a lot of intense medical care. Right now he enjoys being out on the front porch, but it is possible that we might make the decision to euthanize him before we go to the UK if he doesn’t start eating enough to sustain himself. I will miss him but I am not going to force feed him and I don’t want him to suffer.

I’m one of the few people in North Carolina who has not been glued to college basketball watching the last several days. North Carolina lost hosting several tournaments because of a discriminatory law the Tea Party insists is about protecting women and children in bathrooms, but which has nothing to do with bathroom safety. I’d so much rather that they protect children by providing them food to eat, good public education, and free health care, and I’ve never worried about being attacked in a bathroom, much less by a transgender woman or man pretending to be one. I just wish the state government would pay more positive attention to my rights, water, air, soil, health care and place of employment. But, hey, let’s pretend that we’re under attack from the “gay agenda” while losing all kinds of businesses who would have hired people and paid taxes here. 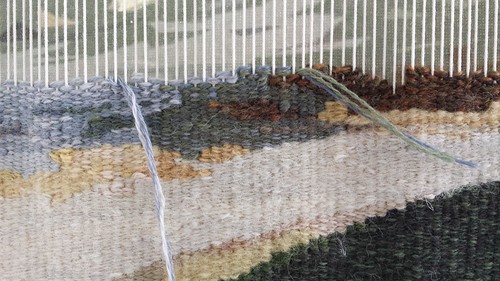 I’m putting this photo here because the bottom one is what Facebook chooses to show with my post.