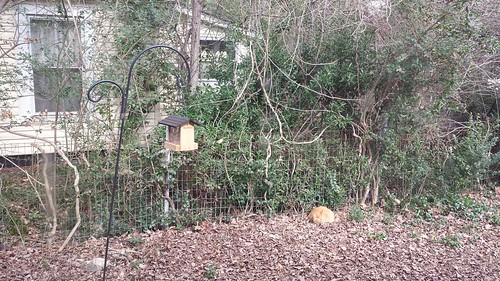 I’m at the studio, looking out the kitchen window at the bird feeder, the cardinal couple and chickadees and sparrows and what I think is some kind of thrush. They are flitting around but not eating. I look to the side and the orange cat from next door, Ralph, is napping nearby in the leaves, eyes almost but not quite shut. He’s lucky that there’s not a mockingbird around.

Today as I left the house, there was a crow with one white tail feather in my neighbor’s yard.

I’ve decided that it’s time to start writing again, whether here or in my journal. This blog has gone through several transformations since I began it in February 2005. First, it was almost completely about my back yard garden and permaculture. Then things got a little crazy at work and it became a place for therapy. (Later during the difficult transfer from GoDaddy to WordPress I did not transfer a lot of the early, more personal posts.) I talked about depression, anxiety, and panic disorder, and my experiences as a recovering agoraphobic. Mostly my focus was on simple living, organic/local cooking, and food issues, particularly honest labeling.

As I moved forward (step by step, inch by inch) in my healing I was able to do some of the traveling that I had dreamed about all my life. Then I suffered major volunteerism burn-out with the food and environmental organizations. Other writers in the area were blogging about local food and I felt like I had said what I wanted to say, so I pretty much stopped writing about food and wrote more about my personal life and travel.

I made the switch to writing about mostly my artwork and travel as my focus shifted there. The two are interlinked. I stopped writing so much personal stuff. I started feeling weird and preachy about politics. I lost most of my readers to other social media, and I stopped reading many blogs as I got addicted to Facebook.

And you know, that’s a good thing.

I’m a grown-ass woman, and my mama is not around any more to complain about what she hears from people at church about my writing on the Internet.

So I’m going to write about whatever I want, in my voice, which means if I want to say that something is fucked up, I’m not going back to edit it. In real life, I curse like a sailor. If it offends anyone, perhaps this is your chance to move on.

For those of you who don’t know me in real life, this is what shapes me.

My politics are unapologetically leftist. I am not a Democrat. I am not a Communist, and I might be a Democratic Socialist if I have to fall in with a party, which I do not plan to do in the near future. I love Bernie Sanders with all my heart.

I was brought up in a Southern Baptist church that my parents were heavily active in, a church that was somewhat moderate before a hard right turn in the mid-eighties. Now I am unaffiliated in religion as well, although I joined a very progressive Presbyterian USA congregation about the same time that I started the blog that really helped my outlook on life. In actuality, I’m probably an atheist. Or a Quaker. Or a druid, although I dislike the magic part. I’m too logical to be a pagan. I am fascinated with Judaism, Islam, and Buddhism. I’m an ordained Priestess in the Church of the Latter Day Dude.

I’ve stopped labeling myself with what I do for a paycheck. However, although my official job title is “Administrative Support Associate” I refer to my job as “Secretary.” I honor my mother and my aunt that way. I don’t like it when people take perfectly good words and make them pejorative. It makes me stubbornly cling to them.

When people ask me what kind of artist I am, I really struggle with that. I think that almost any endeavor can be art if done with the right spirit. I will call myself an artist, though. That’s progress from the first half of my life.

It should go without saying that I am a feminist, but many feminists annoy the crap out of me.

I am quite pissed off at the protests that dilute their focus by trying to please everybody, because I know it’s impossible. I’m not pleased with people who get hung up on semantics. I believe in courtesy, and listening, but I’m not paying attention to those who think that I’m not doing the right thing or that I’m not doing enough or that I don’t care about their passion or issue because I’m not talking about it. Once they get into scolding, I’m out.

There’s not enough room in my head for all that.

Last night I dreamed that I was walking to my childhood home, about five miles away. I was exhausted and I called my mother and asked her to come get me.

“Go pick up your niece. She needs you.”

I called my niece at her college about a four hour drive away. “I am coming for you in about four hours. I don’t know how, but be ready.”

I’m doing the best I can.

I’ll keep doing the best I can.

I hope that you will too, whatever that means for you.

2 thoughts on “What shapes me”