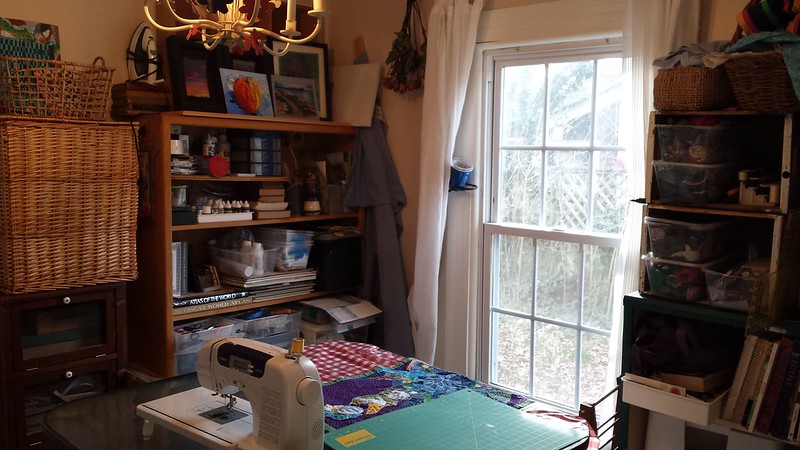 The studio is all moved in to the house on Wharton St., except for odds and ends that will probably always float back and forth between there and home. I spent a good part of this past weekend there, and I think that Susanne and I will both be happy with the situation. I feel comfortable.

We both are joining a few other fiber artists from Greensboro in an exhibition called “The Fabric of Our Lives” at the Congregational United Church of Christ in Greensboro, NC. The show will be up from mid-January through Mid-March. I won’t have anything new to show, but I’m dusting off a few framed tapestries and fabric works and mounting the “Flag of Me” for the exhibition. More details later.

I’ve spent some energy in the last few months with an owner group from Deep Roots cooperative to convince the board of directors that there were some serious problems they were not addressing, as well as that they were taking the cooperative in a direction that was miscommunicated to the owners. We had some satisfaction in the last couple of months. The general manager resigned and five of the board members (from 2015 and before) announced that they would leave at the end of the year. They could not compromise with the newly elected members and our group was going to the meetings, emailing, speaking up, and holding them accountable.

The financial situation is still a bit murky and a whole lot dire, but at least the digging of the hole has stopped and we hope that with the 2016 elected members and their new appointees we will see a change for the better. Certainly there is a sense of relief in the store itself. There should be fewer closed meetings (a.k.a. “executive sessions”) and much more transparency and outreach to the owners of the cooperative. Democratic governance is a cooperative value that cannot be dismissed, and the remaining board members understand that.

I hope to see the store change its food policy back to one consistent with our original sustainable, ethical values, but whatever happens, I feel confident that the owners will have a say in it this time. I can live with that. Hopefully the most egregious of the food-like and factory-farmed products, like Hormel canned ham and Armour Vienna sausages, will be removed from the store. It’s highly embarrassing for a “health” food store and killing our brand that we built for 40 years. Patience is not one of my virtues but I’m going to try to have faith in the process. I know Joel and Betsy will be good guides for us.

Now counting the days until I am off for the winter break. We don’t plan to do much for Christmas, but we have decorated the front porch for the first time. I’ll have a lot of days to relax and do art and read. I really don’t want to do much of anything. Our family got together at Lake Waccamaw for Thanksgiving.

Reading right now: “Down All the Days” by Christy Brown, of “My Left Foot” fame. Wow.