After a lot of coughing, sneezing, and whimpering, it feels like life is turning back to normal again. I was in super-busy mode at work and met the deadlines I needed to on Friday. It’s still busy, but much more manageable. 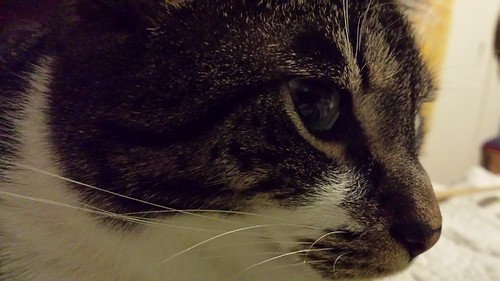 It’s hard to believe that Diego and Pablocito have grown into such big adults. Especially Diego, who I sometimes call “Bruiser” now, because he is not very nice to the other cats. He and Pablocito still play, but you can tell that Pablocito is wary of him. Theo despises him, for good reason, and will hiss at him if he prances up to him. Diego is a buttkicker and a bully, and he likes to cuddle up to me. He has managed to get the bedroom door open two nights recently by pawing at the doorknob and pushing on the door. I don’t think that this is a good development. I love my bad boy, though. 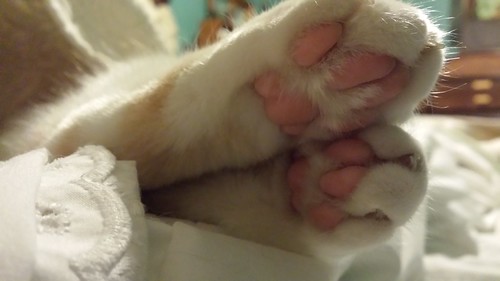 Pablocito is kind of puppy-like – good natured and playful, but isn’t really interested in being a lapcat just yet. Theo will actually initiate a little play with him but Pablo always wins and Theo is not trustful of him if it is Pablo’s idea to play. Pablocito likes to ambush people (and other cats), especially if it is one of his humans trying to go out the front door. The other day he jumped on my shoulders when I was trying to ignore him. Pablocito doesn’t like to be ignored, and he will tell you so very loudly. 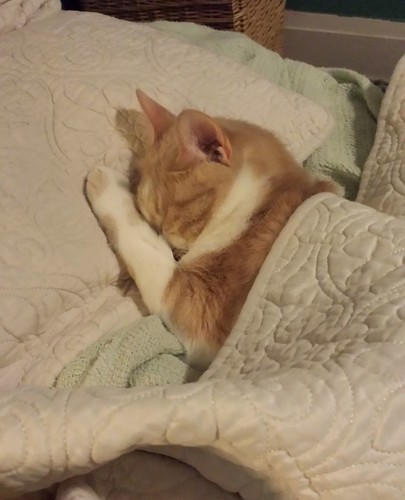 I don’t have a recent photo of Theo, but he is doing pretty well for a 15 year old tomcat trying to hold his own with two young adult toms. I think that he missed Lucy for a while. It is obvious now that she was grooming him because his fur is not as clean as it used to be. He yowls sometimes, but he gets lots of attention.

I’ve caught up on the part of Cathedral that I unwove back in January. I have it to work on at home and I go to my studio at the church to work on other projects or just journal and relax, mostly on Sundays. It is a little bit creepy being there alone at night so if I go during the week, I try to leave before it gets too dark. Yesterday I finished hemming and backing the two small Sitka pine tapestries from last year, and I’m thinking about making them book covers. 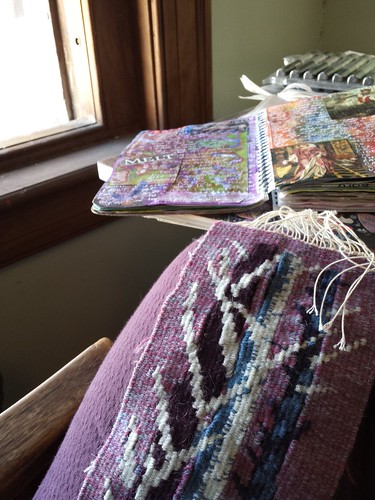 It’s still fun to play with cloth strip weaving, and I still plan to make my blanket of mostly denim. I’m just really getting cranked up there. 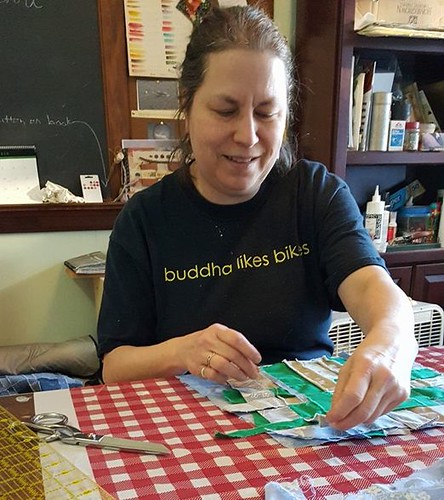 A new fun toy came in the mail from India Flint the other day, wrapped in a scrap of her eco-dyed fabric. Wandercards! They have ideas and prompts on them, and there is a deck of blank cards for dyeing also. Maybe I’ll do some bundles the next time I go to Lake Waccamaw. That would be fun and there is a wealth of leaves that would be perfect for direct printing on cloth. 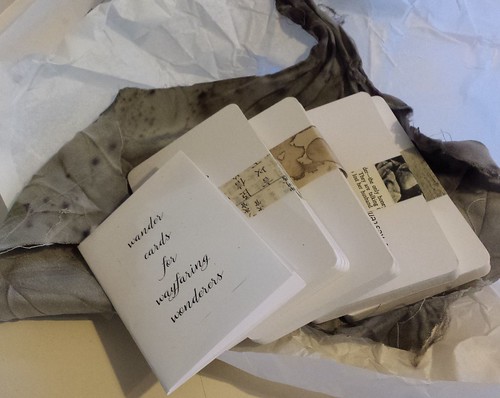 Finally, I’m beginning to get excited about our big trip in May, only about ten weeks away! Sandy and I are going to fly to Minneapolis where we are going to take Amtrak to Portland, stopping at Glacier National Park for a couple of nights on our way. Then we will explore Oregon and Washington State by car, stopping at Pam’s cabin near Cannon Beach for a tapestry retreat. Something nice to look forward to on days when work is a whirlwind and politics makes me want to scream.