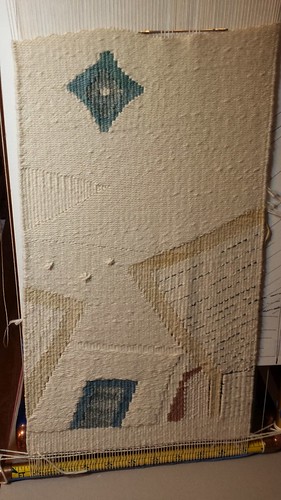 I’m just going to ramble on for a little while here.

I will finish weaving “Migraine Day” today, but I’ve decided to experiment with this piece and make it part of a bigger piece about perception with stitching. It will remain on the loom for a while because I’m going to use the other side to weave another small tapestry. But first I’m going to work on my larger tapestry, “Cathedral,” for a while. 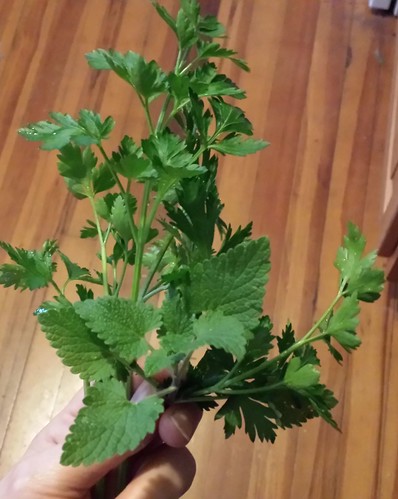 Parsley for us, catnip for the boys. Santa visited last night and left new mousie toys for the boys, which was a big hit for Diego and Pablo. Theo enjoyed the catnip but ignored the toys. He’d rather be entertained by watching the younger toms.

The parsley went into a corn “chowder” – really a bisque because I didn’t thicken it with flour or cornstarch. Normally I put clams in it but the mister is suffering with gout this week so I made it special by using the frozen corn that I bought from Rudd Farm this summer.

Sandy is working today. He volunteered so that others could take the day off, since he knew that I was opting out of Christmas this year. Sort of. He is working on New Year’s Day also.

Opting out, sort of, has been a mixed bag of feelings. I feel a little guilty, although the rational side of my brain says, “NO NO NO NO NO, don’t feel guilty!” I didn’t send Christmas cards, although I’ve been backing off of that for years. I didn’t decorate AT ALL this year. Normally I at least put up some lights and a tabletop tree. I didn’t buy many presents. That, too, is normal for me now. Sandy and I are going to buy a fire pit for our Christmas present after Christmas. I’ve donated the money I would have spent to several different charities, including one to help refugees in the Middle East.

Still, that is definitely my mother I hear in my head. “Oh, LAAH-ree!” Heavy sigh. I can see her shaking her head in disbelief.

It is wet and warm today, so my original plan to spend a cozy day in the studio with the woodstove going and a teapot with cloves and cinnamon on top has changed. I’ll put the teapot on the stove in the kitchen and turn on the ceiling fan. Many folks around here have thrown open their windows. I might open the doors.

My heart goes out to my friends who have lost loved ones this holiday season, as well as those who lost their homes in the tornadoes yesterday.

We will probably go to a neighbor’s potluck Christmas dinner across the street tonight. I’ll make an asparagus casserole.

In the meantime, I’m back in the studio. And that’s a good thing.

Was just reminded of this song – I like this version by Jackson Browne with the lyrics.