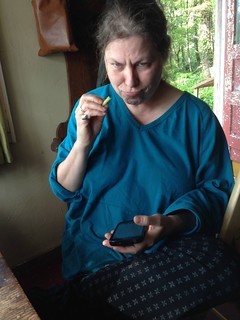 And boy, am I glad that I didn’t pay attention to the news much while I was on my great Oregon adventure. The only good news I saw was from the Supreme Court, which was, of course, AWESOME, but the news of the Carolinas was just plain awful. I can hardly stand it here any more. My plan to move to the Pacific Northwest looks better all the time.

I’m about to blog the trip, but wanted to warm up by doing a little brain dumping.

We ate well in Oregon, but also we ate a lot of sugar, junk food, fried food, cheese, bread, and of course I sampled the local beer and ale rather liberally, so I came home with five extra pounds. I finally got up the courage to look up my blood test results and my cholesterol is still way too high but it came down 13 points. After my trip I’m guessing it went back up too – BUT – I’m starting over. I’ll get it going in the right direction again.

When I left North Carolina we were in the beginning of an intense heat wave, which triggered a lot of thunderstorms so my garden was watered naturally. The woodchuck finished off the pea vines and most of the parsley and all the flowers, but left the rest alone. At the UNCG garden I picked three yellow squash and saw that squash borers, the bane of my squash growing existence, had gotten into the vines so I pulled two of them up. Tomatoes had ripened and unfortunately three of the Brandywines had rotted. I brought home one big green one that had started to turn yellow home so that I can ripen it in the kitchen, and harvested many Sungold and Roma tomatoes. Hopefully I will have okra soon. Zinnias are blooming and the sunflowers are gorgeous! 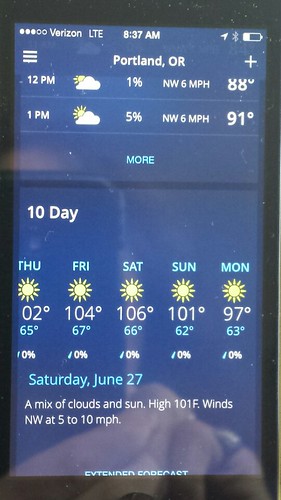 When I left Oregon, THEY were in the beginning of an absolutely insane heat wave with record-setting temps. However, we spent most of our time at Cannon Beach where it is so cool that we needed jackets and used the woodstove. At our class at Pacific University in Forest Grove I actually burnt my hand on the outside metal door of our classroom, but we were lucky because we had air conditioning. Much of the campus didn’t.

Now it is a reasonable temperature here in N.C. and we are getting storms every day. I do love a good storm. I have recovered from jet lag and had two days of major catch-up to do at work. Now everything is back to normal. We had considered going to Lake Waccamaw to see my sister’s “new” house but there’s a bit too much chaos going on in their life right now, so we have that to look forward to later this month. I’m ready to stay home this weekend anyway.

Because home is still home and as much as I badmouth this state, Greensboro is a great city to live in, and I know a good thing when I see it. I’m a lucky woman.

But I’m still moving to Oregon (or somewhere to the northwest) when I’m 60. It’s where I belong.

3 thoughts on “Back in Dixie”