I spent a good part of my spare time in the last two weeks taking nearly everything off shelves in the studio, everything out of drawers, sorting items into labeled boxes, and putting it back in something that resembled order. After a couple of trips to donate unwanted stuff and a lot of trash removal I now have some actual space in my studio. I can’t tell you just how much it was worth it. I’ll do a second round of purging in another couple of months. 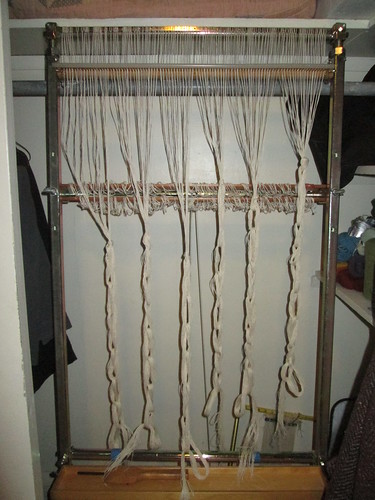 When I wasn’t reorganizing, I worked on warping the new Shannock loom in my bedroom closet. It is a different method than I am used to, and I love it. I measured the warp threads in double lengths on my warping board a few at a time and tied them one at a time in a lark’s head knot on the top beam. I kept the warping board in another room so I had to walk back and forth a lot – that helped my back. I did it a bit different from the instructions which told you to tie them all on first and then lay them in the raddle. I found that it was easy to lay each one in the raddle as I tied it on.

And boy, do I love that raddle! If I could afford to buy new reeds for my floor looms I would definitely get this kind of design. A heavy plastic tube runs along the top of the nails in the raddle and you can slide the tube to open and close to secure your threads in that space as you move down the raddle. Imagine a reed that you do not have to thread with a hook – you could simply drop the warp thread in from the top and slide the top bar over it. I think that they are available but I have invested all I intend to in my floor looms. 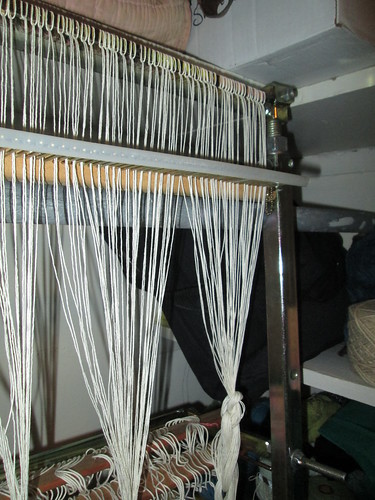 Since I took these photos I decided to ditch the heddle bars and the floor pedals. I didn’t feel like it is worth the trouble and time to thread the heddles. When I have done it in the past, I’ve ended up not using them. If my hands begin to hurt on a regular basis I can always hook them up later. I wound the warp around the top bar with some brown kraft paper and tied most of the bottom ends to the bottom warp bar before my hands gave out. Now I think that I may rewind the top bar with stiff watercolor paper instead and hope it will avoid tension problems. I measured long enough for two tapestries about 32″ tall each and some sampling. I’ve learned the hard way over the years that it is best to get the tension right as much as possible from the very beginning, and tight tension is especially needed in tapestry. 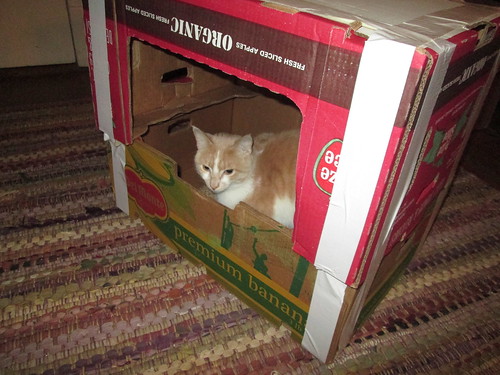 The terrible tomcats were very much interested in the whole process so I tried to distract them by building them a fort. It worked but not for long. Way too boring for them.