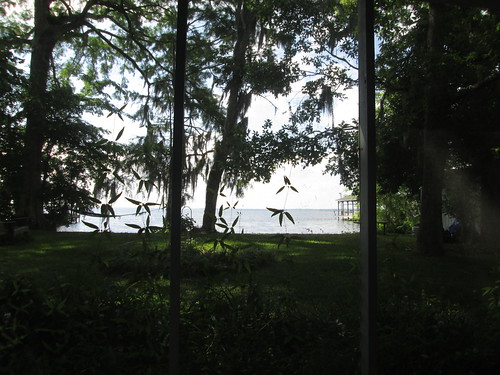 Sandy and I spent a couple of days at Lake Waccamaw at my cousin’s house last week. It was a busy week despite being on vacation. We spent one day reading and playing in the water and the next day we went to Wilmington briefly and I did some eco-printing inside because of the rain and the midges and mayflies. When the workers began cutting back the bushes at the house next door on Friday morning we both decided to split and go to Marietta with Mama. 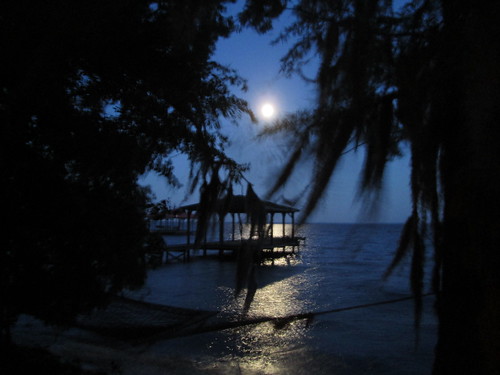 The full moon was beautiful the first two nights. The third night there was a tornado warning for a few minutes but most of the weather shifted to our northwest. Thank goodness, since there is no good place to take cover in the lake house. 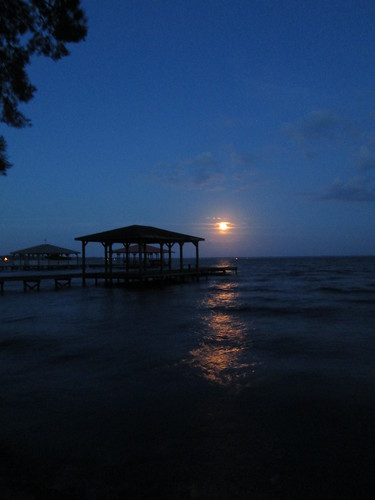 I walked around the yard between storms and collected as many different fresh leaves as possible, combined them in a folded accordion book with some metal pieces that I’ve collected, and steamed the book, then immersed it in a dyebath with privet leaves and flowers and bald cypress needles in lake water. I figured that the bald cypress needles and lake water would provide enough tannin to create a mordant.

The problem was that I used too much metal and to me it spoiled a lot of the individual prints. The ones I like the most are simple. Also, part of my goal was to identify which leaves made the best prints, and for the most part, I couldn’t tell you. The Virginia creeper and Rose of Sharon leaves made nice prints:

There were other vines that I liked and the oxalis stems and bald cypress needles made nice lines. The flowers on the shrubbery and privet flowers worked well too, but very subtlely.

Mama transferred from the rehab center to my sister’s house for a week, and then we met my brother-in-law halfway on Friday and took her home. It’s been about a week since she went home and although she is still weakened, a physical therapist is coming to her house three days a week and she has a little more paid help to assist with light housework and yard work. She also has an amazing community around her that supports and loves her. I’ll go back down there this Saturday and stay the night.

I hate all the driving but I’ve found that books on CD makes it much more bearable. I decided to listen to Newberry Medal winners that I never read, because they are a little easier to follow while driving. Anything more complicated causes me to skip back to see what I missed, IF I missed something, when I am distracted by something on the road. Last week Sandy and I listened to Hatchet by Gary Paulsen and this week I will listen to Holes by Louis Sachar.

We came home to a huge pile of hardwood shredded mulch in our driveway. The problem was that I ordered compost. We are using part of the mulch to put on our paths but it was disappointing since I thought that I’d be planting more in raised beds this month. Oh well. Actually, last week really sucked for the most part. A friend died, my sister’s cat was bitten by a poisonous snake and died (I loved that cat and everyone is wrecked over his death), my laptop got a bad virus and didn’t come back intact after wiping the hard drive, and our basement flooded. I’m looking forward to that week in June in Gatlinburg, studying indigo dyeing with Rowland Ricketts at Arrowmont School of Arts and Crafts. 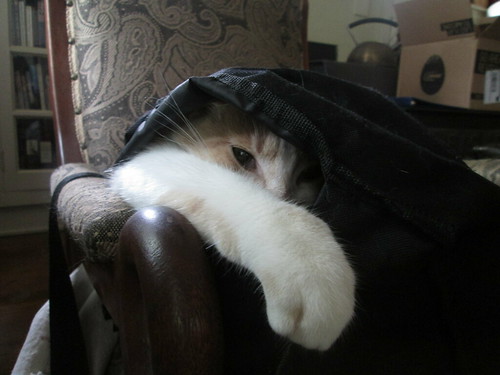 However, even though the kittens are almost a year old, they are so much fun. We put carpet down in my bedroom and it looks and feels so much better. Still reorganizing and getting rid of stuff and it feels good. We celebrated our 27th wedding anniversary and ate a delicious brunch on Sunday at Sweet Potatoes on Trade St. in Winston Salem. Best shrimp and grits that I’ve ever eaten and I do not made that statement lightly.

Will try to do better with the blog posting but between work and Mama’s illness it was all a little too much.