First I’ll do a coffee pot post to sweep out the brain junk, then I’ll post about my wonderful two day workshop with Chad Alice Hagen. 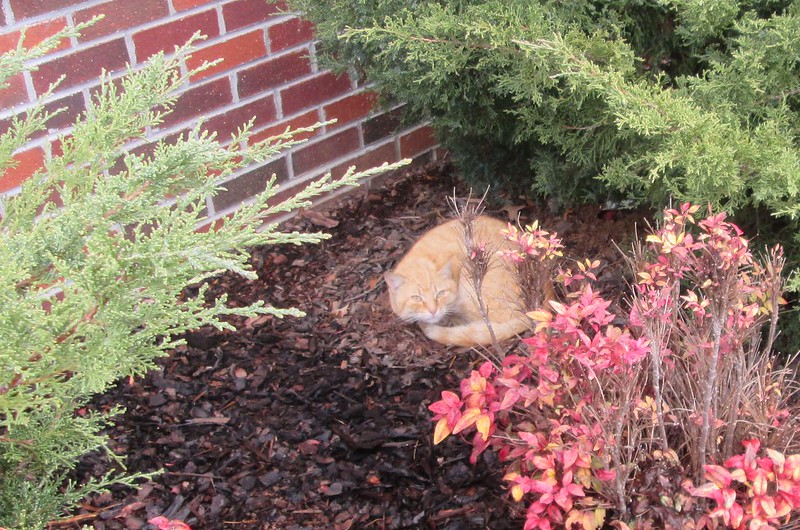 I discovered where this fine feral feller likes to hang out and started leaving him a little cat food on my walks by these bushes on my way to work. I first saw him this past fall and I’ve worried about him in the bad weather. Hopefully someone nearby has been caring for him over the winter because he looks pretty healthy. What shall I call him? I’m thinking “George.”

I sure did eat out a lot this week! I visited Fishbones with Sandy on Wednesday night and again on Friday night with Chad Alice Hagen, Victoria, LaMoyne, and Rosser. We had a grand time and I look forward to deepening my friendships with this women. Rosser took this photo of Chad Alice, me, and LaMoyne.

Thursday night was really special too. I went to Scuppernong Books and listened to Natalie Goldberg read from the re-released and revised Living Color. One of the reasons that I started writing for myself again was Goldberg’s Writing Down the Bones and Anne Lamott’s Bird by Bird. I realized that I could enjoy writing without judging myself and that made all the difference in the world to me. It has been a form of emotional release and a satisfying way to express myself since I was in middle school. I bought Living Color, which focuses on painting, but as with her writing books casts a large net over all creative expression, and Waking Up in America and Old Friend from Far Away, so I have some great books to read this summer. Another plus – I didn’t make a fool out of myself when she signed them, as I am prone to do with writers who I admire.

I’ll add a photo if I can get my Kindle Fire to connect to Wifi today. (Update: It’s a horrible photo but isn’t that window fabulous?) That is the only thing that I dislike about my Kindle. It does not play pretty with our Wifi at home or at Scuppernong Books. The bartender there explained that Kindles and indie bookstores don’t like each other, which makes sense, but we can’t figure out the problem at home since my laptop and my former Kindle connected just fine.

I met some interesting new people and saw a few friends there which makes me feel like I may be in the right place for me after all – an unusual feeling for me. I introduced Anne P. to M’Coul’s after the reading and booksigning.

Mama’s biopsy came back negative, but she still has to have the tumor removed because it is almost blocking her colon. Her surgery is not scheduled until May 2, and I’ll go down there for a week or so before and after the surgery. At age 90 any surgery is complicated and dangerous so we’ll play it by ear.

This also means that Sandy and I will probably put off our May vacation to another week later in the year. We were going to drive to St. Louis and go to Cahokia, a place that Sandy has wanted to visit for a long time. At least I had not bought plane tickets or made any unrefundable deposits.

A good friend’s position was lost to budget cuts at my place of work, due to our state government’s gutting of public education. I hope that they will find her another job in the university. Every freaking year since the GOP took over we have to worry about our staff co-workers losing their jobs, and every year the cuts get closer to the bone. I am weary of it.

Coffee is gone, will take a break and then post about the felted book workshop!