This was our second trip to Lake Waccamaw this year. My original intention was to stay a couple of days with my sister, visit my mother in Marietta, and then spend the rest of the week at home doing arty kinda things. However, my sister and her family were involved in a tragic rescue attempt that ended with the death of a small child next door, and in order for them to stay in the house (which was rented through early August) and work through it, they needed some loving company. So I stayed.

This little house was perfect for storm viewing, but gah. By the time I left, the front and back yards were covered in water. My car got bogged down in the mud at one point.

But there were a few times when we could sit out on the wet chairs on the pier between storms, and I enjoyed the break from the Internet and reading books. My cousin and his wife were a few houses away, and I got to visit with them.

I gathered Spanish moss and papyrus to take home for papermaking, along with the palmetto fronds I gathered at Jojo’s apartment in Wilmington.

Of course, there were alligators. Lots of babies. I didn’t see Mama Gator this time. We had to park our car next to the canal where the babies of different sizes were hanging out on the bank. When they swam you could see all four feet paddling. They were oddly cute. But I was aware that Mama Gator was probably watching them and us the whole time. 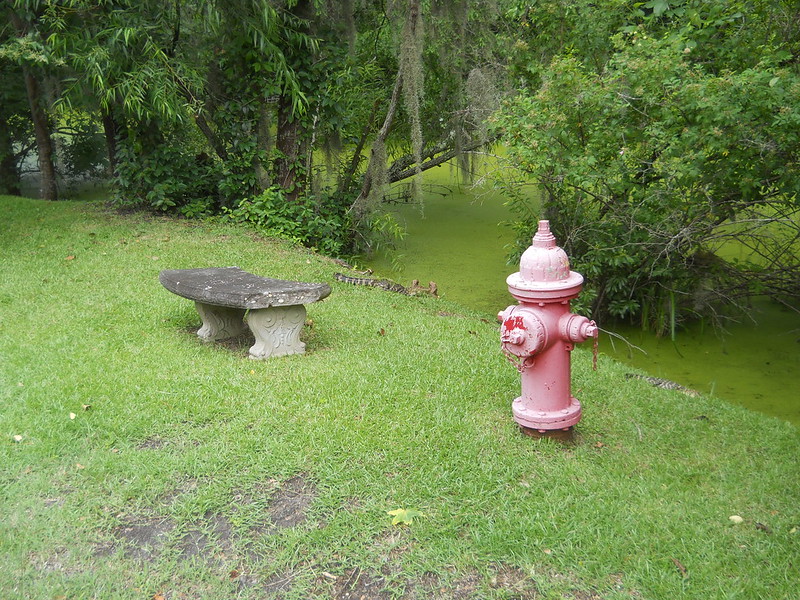 When I left, it was raining. A dangerous, dump of water that made cars swerve all over and off the road.

We swerved around a silver car that had wrecked with its back end sticking out into the busy highway. Sandy pulled over and I ran up to the driver, who was okay but clearly shaken. The truck she had hit had left. I convinced her to pull out of the road, otherwise I might not be here to tell this story, because it was an urgent, extremely dangerous situation. She couldn’t get 911, but a young guy came along to help and said that he’d stay until help came for her. There were several other cars and trucks in the medians and sides of the road.

It has rained every day for over a week and heavy rain is expected every day throughout this week. Everyone is sick of it. My sister’s house in Chapel Hill flooded, and I suspect that she will find that her rental house at the lake is flooded when she returns.