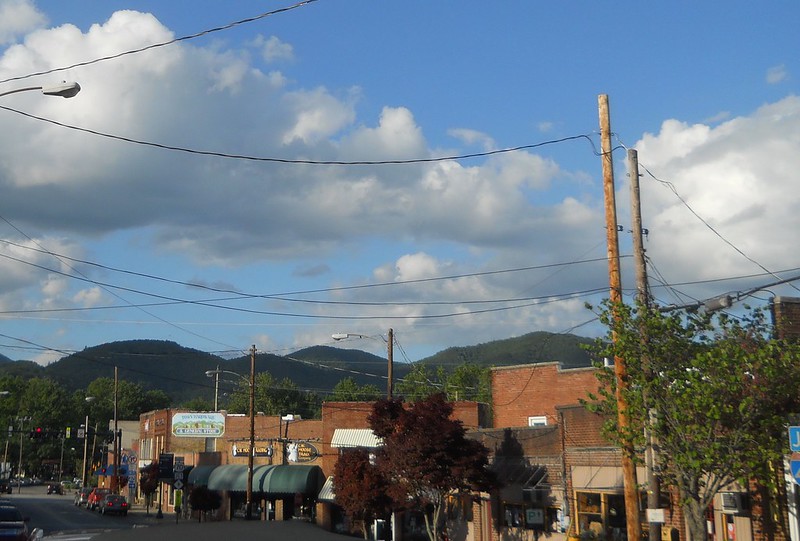 Continuing the tale of the past weekend:

Of course, we spent too much money, even though we spent two nights in the Super 8 motel in Black Mountain. It isn’t bad for the price. Our first stop was at Nice Threads Fiber Gallery on Cherry St. in Black Mountain, where I showed Leslie several of my small tapestries. She is taking them and two scarves on consignment through the end of August. At that point, I hope to figure out somewhere else to foster them, if they don’t sell.

We had drinks and ate at Black Mountain Ale House. I had an appetizer of fried eggplant sticks, mmmmm, and Sandy had shrimp and grits. Someone at the bar steered us to Pisgah Brewing Company that night to hear Hyrider, a Grateful Dead/Phish tribute band. They were really good, the beer was organic, and a cute guy with dreadlocks flirted with me. The cooks in Lovin’ Tenders, the food truck, let me sample a grilled turnip slice. It was pretty good! So that was a pleasant evening.

Sandy wandered around on his own while I was workshopping with Dede Styles. He bought a dulcimer kit in Black Mountain. We went to the Wedge Brewery after the workshop and enjoyed their craft IPA outside in the best weather possible.

One reason we love Asheville is that it was a Slow Food place before most places started paying attention to local food, so there are lots of places to get wonderful local meals.

We ate a marvelous meal at Chestnut on Biltmore Ave. near Pack Place. Again, I forgot to take photos. I’m such a bad food blogger these days. Sandy had molasses glazed pork loin and I had cream of broccoli soup and a salad with roasted beets and goat cheese.

This morning we had brunch at Louise’s Kitchen in Black Mountain, in an old house with a big wrap around porch, perfect for sipping coffee and easing into Sunday. They had a couple of rooms for rent upstairs for office space, and I actually took a semi-serious look, even though I knew I’d never make the three hour drive on most weekends to make it worth the cheap rent. I said to Sandy when he gave me that look (you know the look), “When opportunity knocks, you need to at least open the door to see who’s there.” That made him smile. We can’t afford it when you add in the gas and time, but it is fun to daydream about renting a room in the area. 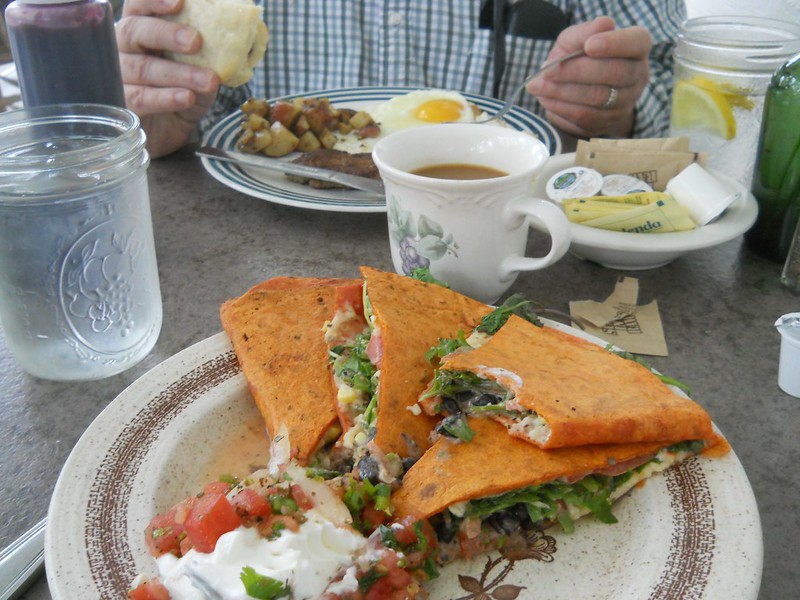 Then we went to a street art/craft fair in Black Mountain where the artists were starting to pack up in anticipation of a line of thunderstorms heading east. I bought a pair of earrings from a young woman making very attractive jewelry with recycled magazine paper beads. Another mixed media artist used tubes wrapped with different papers and fibers in woven-like structures and collage. Resolved: will take an old National Geographic, some straws, and a tube of white glue to work for slow days.

Back to Asheville, where I abused my credit card at Earth Guild by buying a variety of mordants, along with madder root, cochineal beetles, and indigo. I ordered thiox (a color remover) and a digital scale from Amazon today, since I missed that I needed the thiox for indigo dyeing, and the scales at Earth Guild were more than I can afford right now. I’m quite tempted to buy a used turkey fryer with a propane kit to dye hot baths in, but I am a little bit afraid of cooking with gas. My first apartment had a gas stove and I called the gas company every time the pilot light went out. I’ll make do with an electric burner for now.