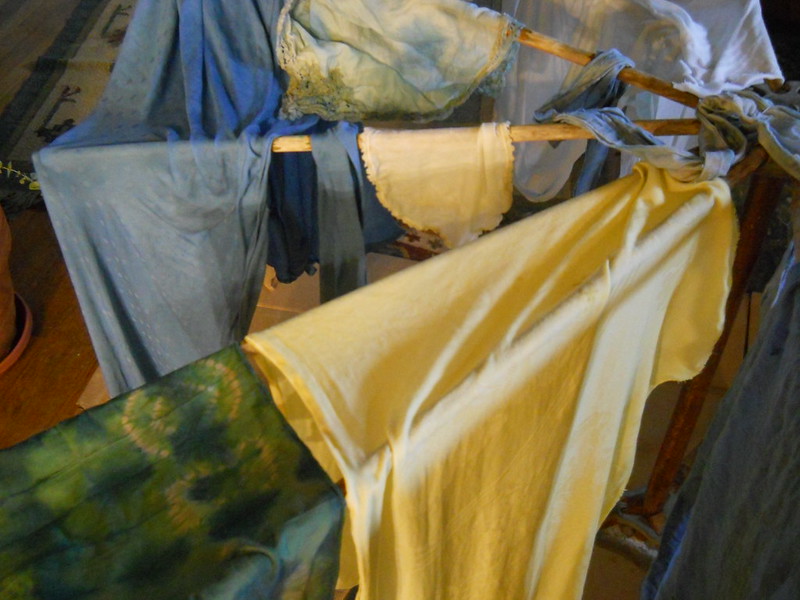 So, things are going fairly well. I sold three scarves, a few books, and a few prints at the gallery in the past two months. I’m going to renew my contract for May 2012-13 but rent a smaller space, since I really didn’t need three shelves of space this year. If my sales get a little better, I may even break even next year, but I’m not really doing this for the money anyway. I just want an outlet for my art and be a part of the art community in Greensboro.

The critters are doing better. Theo was acting weirder than usual (notice the “-er”) and I finally found a flea on Guido. Theo is super-sensitive to flea bites. Now they are all dosed up with Advantage and loratidine and everybody is happier. Lucy is still very congested and I bought a vaporizer for the bedroom where she sleeps and hangs out. They all play and fight and are fairly active for older cats. Sandy saw Guido dancing sideways up to Lucy like a kitten. He did cry a lot last night and now when he does that I worry more, now that I’ve seen the xrays showing several kidney stones. I figure that he may be trying to pass one. If one gets stuck in his urethra, we will have a very tough decision to make. He’s not crying today so it’s possible that he either passed it or he had the old kitteh blues. I’ll going to slip him a pain pill if he does it again tonight.

I’m doing better, although my hand is very sore. I was released from my hard splint on Thursday and I have to do physical therapy once a week for three weeks starting tomorrow. Not bad. The scar tissue in my palm is very hard and I am working on it with lotion and massage. I pushed it a little too hard yesterday cooking and doing things around the house and my hand went numb last night. Now I know why he prescribed a “compression garment” (i.e. glove) for me but I put it off since I know that I have one around here somewhere. Of course, I can’t find it so I guess that’ll be one more expense when I go in tomorrow.

The exciting news is that I signed up for this workshop with India Flint in August: In Search of the Blues. I’ve been entranced with India Flint’s work for over a year now, and despite the workshop comes at a time of year when I normally cannot take off work, I could not let the opportunity to learn from this amazing Australian artist go by. When I heard that Jude Hill was also going to take the workshop, that settled it. My two biggest inspirations in one place, playing with indigo in the New Hampshire summer? I had to do it. I only wish that I could take both workshops, but I am grateful for the chance to take the one.

I struggled with this decision because we are planning to go to Ireland for our 25th anniversary in May, and I have so many bills with my surgery and the cats’ vet bills and the house repairs now. I’m not bad off, but I am used to budgeting for these kind of things so that I save up beforehand and am still able to pay off my credit card each month. Now I have too much on my cards to pay off at once and a big home equity loan. I don’t mind our mortgage – Sandy pays that and it seems a necessary evil that I don’t think about. But I hate being in debt for other things. I have the money saved for my plane ticket, and Sandy has the money saved for his plane ticket. I don’t want to touch that, for fear that the trip plans might fall apart if I do. 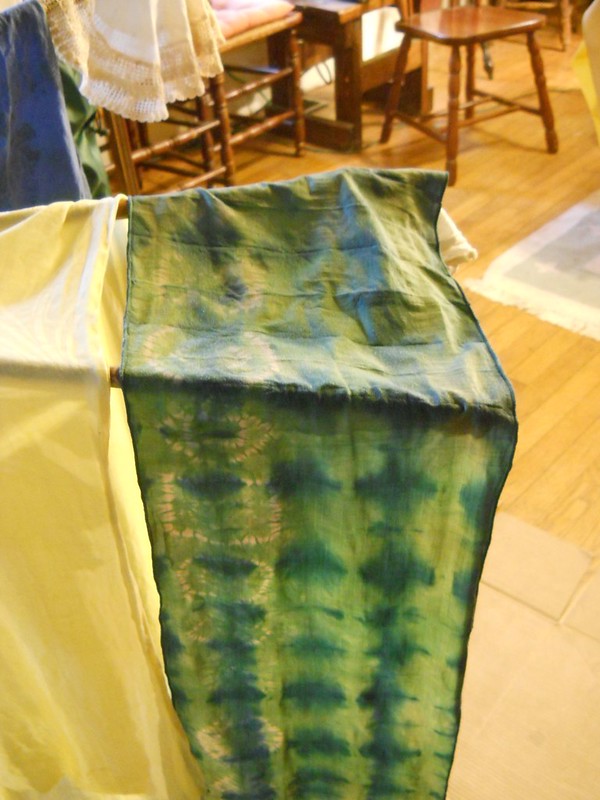 Susanne and I played with dyes this past Monday and that was great fun. I dyed some of the cloths that I bought at a rummage sale for 10 cents each in blue in preparation for a boro cloth I am planning to sew, inspired by my online lessons with Jude. I overdyed a rayon scarf that I had originally dyed at the shibori workshop in Asheville, then decided to give it a dip in black walnut dye to tone down the green. I didn’t like the resulting olive shade, so I pleated and bound it and kept it waiting for a blue dyepot. The photo shows the results, which I am thrilled with. After a wash in hot water and a turn in the dryer on hot, it is muted and soft and lovely. There are a couple of small holes where I messed up in snipping away the shibori knots, but Kristina suggested sewing a smattering of beads across it to hide that – a good idea. I may simply do a little embroidery with silk thread, though.

“Anonymous” is a very scary bunch, and I’d hate to get on their bad side. And I’m not sure that I can endorse them. But this gave me a good chuckle first thing this morning. Anybody who screws with Monsatan is a hero in my book.

Okay, I still have work to do on these puppies, but here are some photos of the books I made in Daniel Essig's class at Pocosin Arts School of Fine Craft in Columbia, NC this past week. I will probably rework the covers of the beach themed one. The original had tiny nails around the mica insert but I cracked the front cover with the very last tap of the hammer. So I used double-sided tape and Lofta paper to hold it in. I have a different idea now. The little book with the arch is pretty much done. I'm excited about the darker wooden covers and plan to dye leaf prints onto handmade paper for the pages. That sprig of dried greenbriar vine is pretty strong and it will be tied to the cover. On the back is a little window with half of a hickory or butternut shell with a mica window. I should identify it, I guess, but it was washed up on a lake beach. @pocosinarts
Storm progression over the Scuppornong River.
Scenes from our day and evening in Lisbon.