I’ve already gone to Susanne’s and the farmers’ market, so I’m working on my second pot. 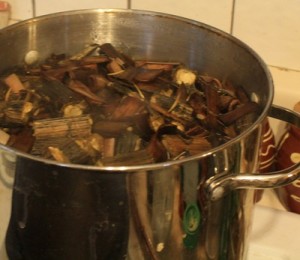 I have found it curiously difficult to write this week, either here or in my written journal. Depression pretty much reigned, so I blame that. I’ve had dreams that influenced my days, and my hip pain is slowly increasing, and all I have wanted to do is eat and sleep. Last night I devoted to cooking dried cattail leaves and artichoke stalks and flowers in soda ash, while watching Hulu and binding a book. I feel better this morning but this house is just plain horribly nasty and must be tackled with a stout heart TODAY.

The only big thing that happened to me this week is that I got a flu shot, and once again, I fainted for about ten minutes afterwards. Or I would have, but the nurse held me sitting up in a chair and constantly joked and tried to convince me that it was all in my head. If I hadn’t been so desperately miserable and half-conscious at the time it would have infuriated me. I did a bit of research online and found other cases of people who faint after injections, but aren’t fearful or consistent about it. In my own case, I don’t like shots, but I’m not afraid of normal shots in my hip or arm any more. I know that they aren’t so bad. (Now, a shot in the roof of my mouth or into my hip joint…that’s different!)

I have had shots in my hip, and have had blood drawn for tests, and did not have a problem. But each time I have had a shot in my arm, I have fainted. I had two incidents of fainting after injuries – once when I had a puncture wound in my foot, and another when my little Squirtley laid my finger open when I was dumb enough to stick it between him and Jazz in a fight. He was being Darryl Feral that day. I have had fainting incidents since I was a little girl, sometimes for no apparent reason.

So I wonder what is behind these fainting spells. It has to be a physical over-reaction to certain things. Today there was an interesting article in the New York Times Magazine that discusses the physical causes of anxiety. I really wish that more people understood anxiety and depression. Maybe then when we need real help, we wouldn’t be expected to relax on cue or snap out of it because it is all in our minds. Or told that we really don’t need our medication, because we are being manipulated by culture and advertising.

Anyway, if I do get another shot, it will be in the doctor’s office instead of in a public place.

Susanne is going to beat the pulp that I prepared last night and I’ll make paper tomorrow. Today, after I finish cleaning, I’m going to glue and paint and work on covers.