On some mornings, the sky melds with the lake.

This is my fourth annual post about a weeklong trip to my cousin’s house on the shore of Lake Waccamaw. This week was a little unusual because we were the only ones there the entire time of our stay. My sister, brother-in-law, niece, and grand-nephew, and my cousin and his wife were all supposed to be there the first weekend, and I wasn’t sure about the second weekend until the last minute. Everyone cancelled. This was nice for me in a way, since I revel in solitude, but not so great for Sandy, who is a more sociable fella. We didn’t even get a day visit from my mother or brother. Of course, if anyone showed up yesterday, they found the house shut down, because we skedaddled late Friday night, a day and a half before scheduled.

Upon getting there last Saturday afternoon, I immediately dived into artwork. I soaked cattail leaves and bulrushes to weave hats, and took over a bedroom for my studio. I spread everything out where I could see it and for the following week, I selected my projects from this room and took them out to the screened porch to work on. I’ll save my artwork for another post.

It rained off and on all weekend and Monday, which was just dandy with me, since I love storms at the lake. Often you can see the rain moving across the lake, and you may end up getting a taste of it or not. Once a cloud of mist from the west covered the lake up to the boat, from which the view to the east was clear. Sandy wondered if we were in the Twilight Zone, and I thought that we should get on the boat to see what happened, but we didn’t, so we’ll never know.

We napped on the gliders and the hammock and read books. Sandy went through at least half a dozen books. I had a variety of things to do and a thick novel, Ahab’s Wife

, which was excellent and took me through most of the week. Now I’m considering checking out Moby Dick from the library, having never read the “great American novel.” I had just finished The Maytrees

by Annie Dillard, which takes place in 20th century Provincetown. They were nice companions to read back to back.

The lake changes every time we come here. Last year during the drought, the artisian well dried up and the water receded about 8-10 feet. This brought differences in the water plants, as well. Then in late April, the water was lapping at the edge of the bald cypresses, higher than normal. Now, in late June, the old cypress stumps that were formerly buried in the sand were exposed much more than normal, and were catching lots of flotsam and jetsam from the lake, including a lot of broken glass, china, and brick pieces. I even found a broken flower-arranging “frog” in the lake. I spent time everyday wading on the edge of the lake, picking up glass and trash and hard driftwood sticks. I plan to use the driftwood in making books and paper sculpture and weaving – I’ve got several ideas for these sticks. I think that my most pleasurable activity was wading under the shade of the huge old bald cypresses, picking up the small smooth sticks and knots of wood.

One of the reasons that my sister left early is the critter above. This is Mama Gator, an alligator who appears to be about 10 feet long that lives across the road from the house in a canal. She often has little babies swimming around. This year, she has taken to sleeping in a patch of unmowed grass beside the road a few doors down – not that we knew that. Lisa was walking with her grandson and walked up to within six feet of Mama Gator. She grabbed the back of Jake’s shirt, yanked him backwards, and yelled “Run!” It shook her up terribly and she says that she’s not sure that she can go back. People still bike and walk along there all the time, and she talked to the neighbors who said that the construction workers working on the house there had been feeding her. How incredibly STUPID is that! The locals down there take the alligators in stride – the only incident has been the death of a German Shepherd about ten years ago, and they hunted that gator down and killed it. Again, someone had been feeding it. Stupid, stupid, stupid.

I heard the gator’s rumble several times during the week. It sounds like someone trying to start an outboard motor, so I didn’t know what the sound was for a long time. One morning it sounded like it was coming from the back yard next door. The grass had just been mowed so I ventured out to look in their yard, but I saw nothing. Then it sounded like it was coming from the canal again. It didn’t do a lot for my nerves, but I’m probably less scared than most people would be. I just don’t walk beside the road anymore, and I stopped swimming in the lake at night a long time ago.

What really got to us both was the incident in the bathroom on Tuesday night. I was, ahem, sitting on the toilet, and I reached absently for a magazine that was on a rattan shelf, when there was a movement. The movement became a slither. Well. The words that came out of my mouth made it unfit to kiss my mother, I can tell you. The snake was about two feet long, and it ran along the leg of the shelf between the shelf and the wall with its white belly exposed to us and its head hidden, so we couldn’t identify it. Not that it would matter that much if it had been poisonous because I’d die of shock if a snake bit me anyway. I grabbed my toothbrush and toothpaste from the shelf (Sandy couldn’t believe that my reaction was to save my toothbrush, but hey, dental hygiene is important) and ran out of the bathroom.

Sandy was trying to ID the snake before he tried to catch it, and when he said that we had to catch it, I said, “I don’t do snakes.” I understood what he meant – we didn’t want a snake hidden in the house somewhere – but I was frozen. He went to get a large bowl from the kitchen – I guess that he meant to somehow get the snake under the bowl – and when he returned to the bathroom in just a few seconds, the snake was gone. And I still had to pee, but I had to choose the bathroom with the disappeared snake, or the dark back yard with the possible alligator. After a careful inspection, I chose the bathroom. It was careful inspections everywhere in that house until we left, but we never saw the snake again. I believe that it left the way it came in, however that was. There are a million holes in that house. 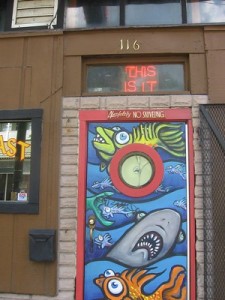 So, moving on from the wildlife stories…we spent a couple of afternoons in Wilmington, where we ate at a couple of riverfront restaurants, and poked around antique stores, art galleries, and bookstores. One night they were filming an episode of “One Tree Hill” across the river from us, and a Tennessee family with an excited young teenager was standing beside us on the Riverwalk, watching it. The girl reminded me of when I was that age. Even in the heat, the Riverwalk is a very pleasant place to walk in the evening. We had a couple of drinks at the Front Street Brewery, which makes a kickass Scottish ale. Kicked mine, anyway. We didn’t have the courage to go to the Barbary Coast, whose portal is pictured above.

On Thursday, after I recovered from the first hangover I have had in a long time, I went home to Mama’s and had lunch with her. She shared a couple of letters from her aunt written to her sister in the early 50s that were just hilarious. I take after my grandmother on that side, and didn’t get to know her sisters and brothers and parents, so it was good to get that glimpse of family history. Great Aunt Rosa wrote exactly whatever came to her mind exactly the way she would have spoken it, and she didn’t hold anything back. Then we went to the farm and picked a few blueberries, but there weren’t many. There is an old peach tree on the edge of the woods that Mama is excited about, and we found it. Trudy, who lives nearby, told her about it and said that the peaches are small but sweet. It was loaded down, too, but they weren’t ripe yet. I gave Mama both of the hats that I made, since she couldn’t decide which she liked best. She helped me gather the cattails for them last year on the farm.

On Friday morning, I had calmed down about the wild critters, and was wading around in the lake again, thinking that it was the most perfect place on earth. But by noon, I was suddenly, urgently, wishing to come home. So after another day of napping, reading, and inkle-weaving, we went to Dale’s for a final plate of fried seafood, cleaned up the house, packed, and was home by midnight. The cats were happy to see us, and we were happy to spend the last two days of our vacation here in Greensboro.