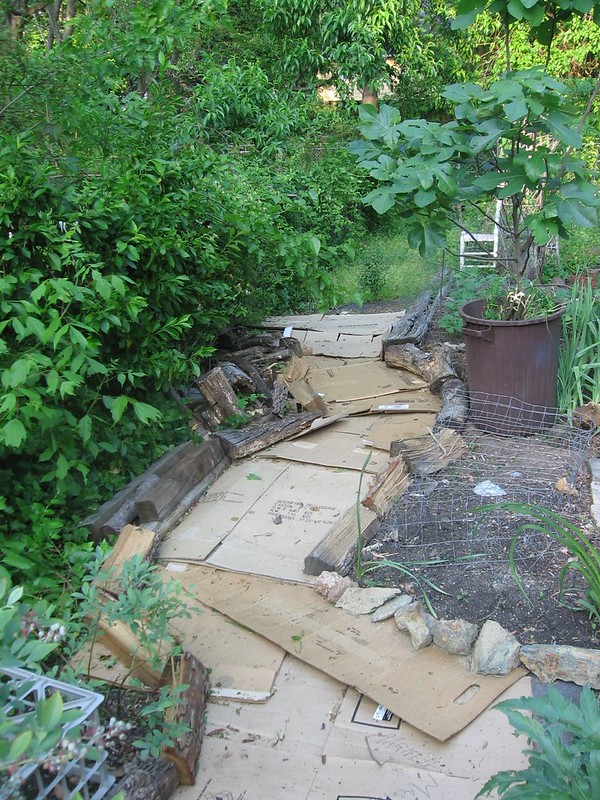 I’m sitting out on the deck, looking over the Back Forty, in my jammies, with a perfect cup of organic fair-trade coffee in front of me, the local Sunday paper beside me, the birds singing, a breeze blowing, Mama Kitty napping on the mat.

I was in a bit of a snit last night, as I have busted my butt and given up some leisure activities that I’d much rather have been doing to finish the path beside the fence this week. I knew that if I didn’t complete it this week, the maintenance of this area during the hot, humid, mosquito-ridden summer would be much more work and miserable to boot. My back hurt, my foot hurt, my elbow hurt, yet I did it. I asked Sandy to do as he promised and carry the bags of mulch to the areas that I needed. He acted as if he was doing me a favor and had the nerve to say “You’re welcome” to me as if I owed him thanks. I shot “You’re welcome” back, and he backed out of the argument that began, saying that this was my project. My side was that if you live here, you are responsible for some of the maintenance of the yard. He said that if it was still grass and we had a mower, he would mow it. Which is a real hoot, because when it was grass, he didn’t mow it. He waited until it was 2-3 feet tall and only mowed it when I gave up and started doing it myself. He hasn’t mowed the little patch of grass in the front in about a year. I’ve done it. Jerk.

Then my NDN got weird on me again as I was moving indoors, exhausted. She is talking about spirits, getting obsessed with the water underground again and now has a fixation on a certain kind of vine that grows on the fence. No matter that she has watched me clean up and mulch half of the area along the fence all week, no matter that the rest of the fence is nicely weeded and pruned back. Or that it took the damn city coming down on her for her to begin cleaning up HER side and WE helped her. This woman, who used to freak out in the misconception that I might possibly be using chemicals in my yard, who came over and pulled up poison ivy BY HAND so that I would not be tempted to spray it, now asks me if I would use Round-up along my side of the fence.

I felt unappreciated and put upon to say the least. I don’t even feel like saying, “Bless her heart.” And I still can’t believe that Sandy doesn’t like what I did in the Back Forty. It just blows my mind. It’s the first time that I’ve felt really angry in a good while. So it feels better now that I’ve vented.

The good thing about yesterday, other than I now have an absolutely beautiful path, is that the reason Sandy was resentful about helping me was that he was on a cleaning jag inside and was purging a lot of stuff he has hung on to for years. This was worth missing dinner out. You do not interrupt a packrat when he has the urge to purge.