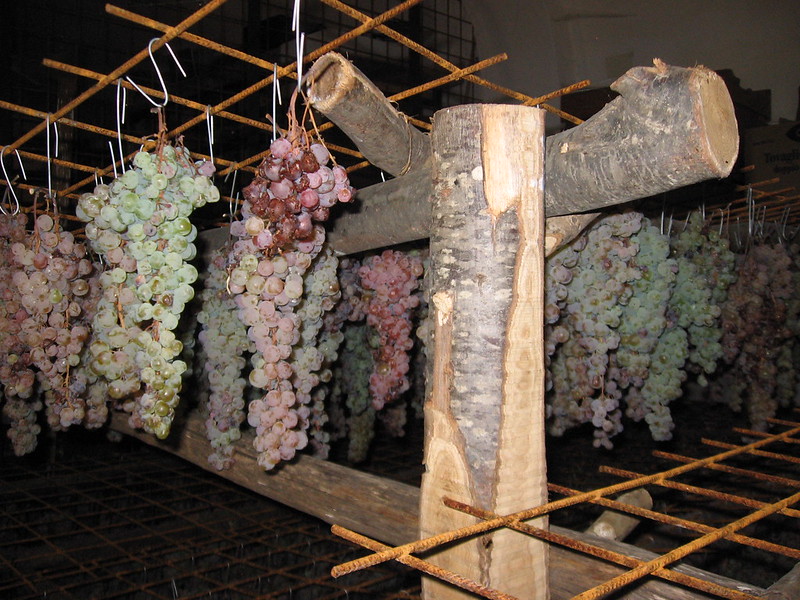 We returned to Spannocchia that evening, where it was pizza night. Pizza night was a big deal at Spannocchia, when the wood-burning brick oven was fired up that afternoon and interns dressed up a bit for the evening. We sang happy birthday to my friend Deb Bettini, who celebrated a big one that day. Pizza after pizza was delivered to the dining room until no one could even consider one more delicious bite. Until the amaretto “truffles,” anyway.

This morning was work time for our half of the class, while the folks who had worked on Tuesday morning had their cooking lesson with Loredana.

First, Charlie took us into the cantina where the wine is pressed, stored, and bottled. Karl-Heinz, whose hobby is home-brewing, was particularly interested in the wine making process so he ended up working in here.

Then Charlie took us on a short tour of Spannocchia wastewater system. In their efforts to return the estate to a more sustainable ecosystem, both graywater and blackwater natural systems were built to recycle the water back to the land. Part of Charlie’s role in his work at Spannocchia through the volunteer organization WWOOF was in planting the terraces with plants that would naturally filter their water as well as provide beauty. Charlie put many other permaculture methods to work at Spannocchia, including herb spirals. 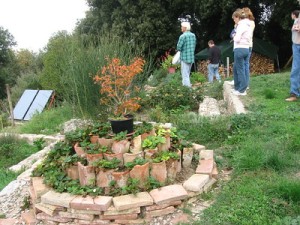 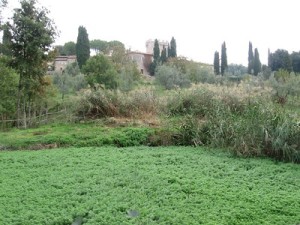 The verdant photo to the right is the end product of the gray/blackwater system, a small lagoon where the used water from Spannocchia eventually ends up. By the time it filters through the septic tank, which catches the fats, oils, and sludge, and the natural system, it has no smell and can be used to fertilize the fruit orchards and is pumped back to the buildings with solar power pump to flush the toilets. The plants growing on top of the ponds can be scooped off and composted. Rainwater from the roofs is also directed to the pond. Since Tuscany is prone to periods of drought, this saves the use of fresh water from San Bernandino’s spring. 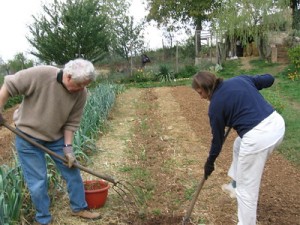 At this point, the group split up, most of us going to work on repairing a fallen stone wall. I was quick to volunteer to help turn over a row in Carmen’s orto, along with Wood. Even if it was just using a pitchfork and pulling grass roots and rocks out of the dirt, I was grateful for an opportunity to work in the garden. Leeks had been grown in this row and Carmen was preparing it for a cover crop. The soil was rocky enough that I bent a tine on my sturdy pitchfork badly enough that we couldn’t use it and couldn’t bend it back. Whoops. Later, when talking with Debby about volunteer work, I found out that working in the vegetable gardens is a primo assignment, usually saved for interns. We were asked to help because the two interns were getting over being ill.

Sandino jumped at the chance to help out in the cantina after deciding that he didn’t have the knack for masonry. Not to disappoint you “I Love Lucy” fans, but he was scooping out the mashed skins and pulp with a bucket, not stomping grapes. He had on rubber boots. It was hard work and his clothes were purple and pungent by the time Charlie rescued him and Karl-Heinz from their labors to play chess.

Meanwhile, the folks in the cucina (kitchen) were having their cooking lesson with Loredana. For the primo piatta, they made gnocchi, which I never cared for until trying THIS version. They made the patterns with forks and by rolling them over a cheese grater. The secondo was saltimbuca (veal rolls), and the contorno (side dish) was one of my favorites, finocchio (braised fennel). For dolce (dessert), salame chocolat. Oh! molto bene. I have this in my notes: “Cooking class had pears with gorgonzola – jealousy!” I hope that I’ll be able to get these recipes from them.

An abstract done in Jill Berry's class last weekend. I was planning to cut it up for book covers, but I think we're gonna frame it and hang it. @jillkaberry
OMG...did you know that if you click on the Instagram logo on the left side of your page, you can click on "Following" or "Favorites" and it removes the garbage from your feed? Maybe you'll see me more often here if this continues to work.