Sandy and I were pretty beat but we had been strongly advised to try to get on the Italian schedule as quickly as possible and not to crash until around 9 p.m. We decided to walk around without any real agenda except to find something simple to eat.

One of the first places we wandered into was the Mercato Nuovo, one of several street markets in Firenze that mostly sells leather, scarves, and souvenirs. It was originally a silk and straw market, and is covered (a loggia). Rick Steves noted that there is a “circled X in the center [of the ceiling], marking the spot where people hit after being hoisted up to the top and dropped as punishment for bankruptcy.” I didn’t see that, but I did rub the snout of Porcellino, a bronze statue that tourists rub in order to ensure that they return to Florence one day. This was the only time that I saw it when it was not mobbed with tourists.

We continued down to the Arno River, then we found ourselves right smack in the middle of one of Firenze’s hotspots – Ponte Vecchio, the Piazza dell Signoria, and the Uffizi. There are many statues here, including a copy of David. The original David was moved to the Accademia to protect it. We walked through the Uffizi courtyard, where there are street artists and living statues, as well as the ubiquitous sunglasses and handbag knock-off street sellers, displaying their wares on sheets and cardboard that can be quickly scooped up when the authorities come around.

Learning about Eating Out in Italy 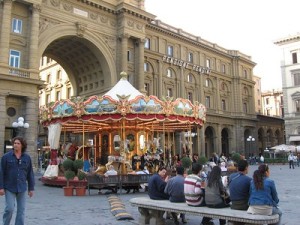 I was getting cranky from pain and hunger (I had problems with what is probably a heel spur during this trip) and this was a nice place to people-watch, so we decided to try getting a bite to eat at one of the outdoor restaurants. Nope – the kitchen was closed because it was mid-afternoon. I felt overwhelmed and so we headed back closer to the hotel and found a place to eat in the Piazza dell Repubblica near this carousel. This was, in retrospect, a dumb decision. They were clearly recruiting exhausted, naive tourists.

Sandy was too tired to order anything fancy so he just ordered pasta with meat sauce and a beer. I ordered prosciutto e melone (ham and cantaloupe), a glass of wine, and water. “Naturale o gassata?” It was the first of many times I would hear this – Italians drink lots of bottled mineral water, with or without carbonation. I’m used to drinking free tap water at meals – it’s one of the ways I save money eating out. But I enjoyed drinking the fizzy acqua minerale at almost every meal here.

Another lesson – it is considered rude for waiters to bring your check before you ask for it. The idea is to let you linger and enjoy your food as long as you like.

Once you get the check, you need to look it over carefully. This waiter added the bottle of water that he did not bring us, and the bill was around 40 euros – that translates to around $50 – for a very small and simple meal with two drinks. Almost every place we went charged us for an extra (large) bottle of water. Sometimes there is a 15% gratuity added (there was in this case, and the service and food was not good). More often we encountered a “cover charge,” basically a fee per person for sitting at a table. And, if you sit down at a table for coffee instead of drinking it standing up at the bar, you can expect the price to be much higher. Waiters in Italian restaurants are paid salaries that don’t depend on tips and tipping is not expected, but we generally tipped for good service anyway. It is hard to get out of that habit and Sandy and I are the masters of self-imposed guilt anyway. 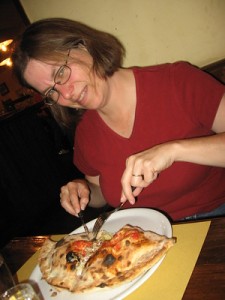 We crashed at the hotel despite our best intentions, then got up at 9 p.m. and went to the Osteria dell Agnolo, just around the corner, for Birre Moretti (beer) and calzoni capriccosi (calzone with ham, olives, artichokes, and mushrooms) and finally I felt relaxed. We enjoyed this place – we needed a spot that was casual so that we could kick back. I tried out a little Italian on the busy waiter and he put up with me! By this time, I had consulted my 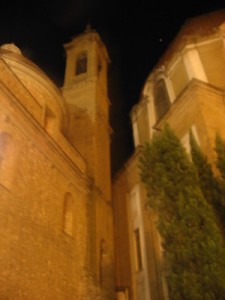 Rick Steve’s guide and understood how the restaurant billing worked a little better.

Then we walked around the Hotel San Giovanni to collapse.