I’ve never been comfortable with flying, and at times I’ve had a full-blown, knee-gripping, catatonia-inducing phobia about it. I did okay the last time I flew. That would be the time that I unknowingly flew through Greensboro and Charlotte airports with a box-cutter in my purse. It was taken away from me in Orlando on the way back – let’s hear it for Florida security!

Anyway, I haven’t flown since before 9/11, and other than a few hours in Tijuana when I was thirteen, I’ve never been abroad. I am a recovering agoraphobic. A few years ago, going anywhere other than work and the grocery store was difficult for me. Agoraphobia is a behavioral response to panic, and there isn’t an easy cure. There is no pill. You first have to recognize it (I didn’t until I was well entrenched in my routine) and then you have to be vigilant and fight hard against your most basic instincts. I’ve come a long way back towards a normal life in the last four years, but although I love the idea of world travel, the reality is that I don’t even like to travel across town.

So this trip to Italy was a bigger deal on a more internal level than most people knew. That’s why I must begin with leaving home.

First mistake – I didn’t buy Dramamine for the trip. The last time I took it it knocked me out, and the last time I flew I was okay without it, so I decided it wasn’t necessary. We had a somewhat turbulent first leg of the plane trip to Philly, and I was suffering from a mild case of motion-sickness. No problem, I figured. I’ll buy some at the next airport. Wrong.

There was a power outage in Philadelphia that put us in a holding pattern. When we got out, we had to run to make the connection. We got on the plane, only to sit for another hour. Which cut our time between flights in Paris. 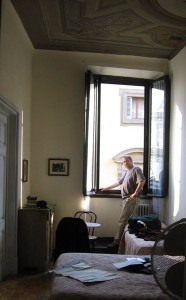 Charles de Gaulle Airport is a horrible, hectic place to need help. The nice people gave us wrong directions. It was the sneering clerk at the Air France desk who finally steered us in the right direction. When we made it to the check-in desk, it was departure time. The clerk there demanded baggage claim tickets that we couldn’t find, since we didn’t think we would need them after being told that the luggage was checked through, and she gave us the choice of claiming and re-checking our luggage or making the connecting flight. We decided to ditch the luggage and run for the plane. We barely made the bus and when we got to the plane, there was my old yeller suitcase on the pavement next to it. It may be a dinosaur, but by God you can spot it a mile away. We made the right decision.

But I didn’t have time to buy the Dramamine. So on the crowded flight from Paris to Florence, I mostly slept with my complimentary croissant in front of me, occasionally sipping a cup of hot tea. I was too airsick to look out the windows as we descended into Florence, but I glanced back at Sandy, who was several rows away, to find him looking at me, then out again, then looking at me and nodding. 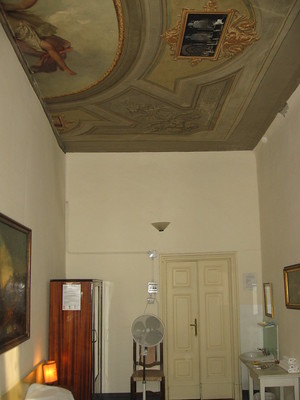 We took a taxi to the Hotel San Giovanni and found that we had one of the rooms with a frescoed ceiling. Charlie told us later that the hotel had once been the home of the bishop of Firenze. We had an amazing view of the Duomo and Baptista and the busy crowds and traffic three stories below. The room itself was very simple and had no TV, phone, or even a clock. We shared a bathroom in the hallway. For campers and misers like us, just having a bathroom in the same building is actually a step up for our vacation digs. The bed was ultra comfortable and hey, there’s a FRESCO on the CEILING.